Libya's parliament said it would be "impossible" to hold elections as planned on Dec. 24. 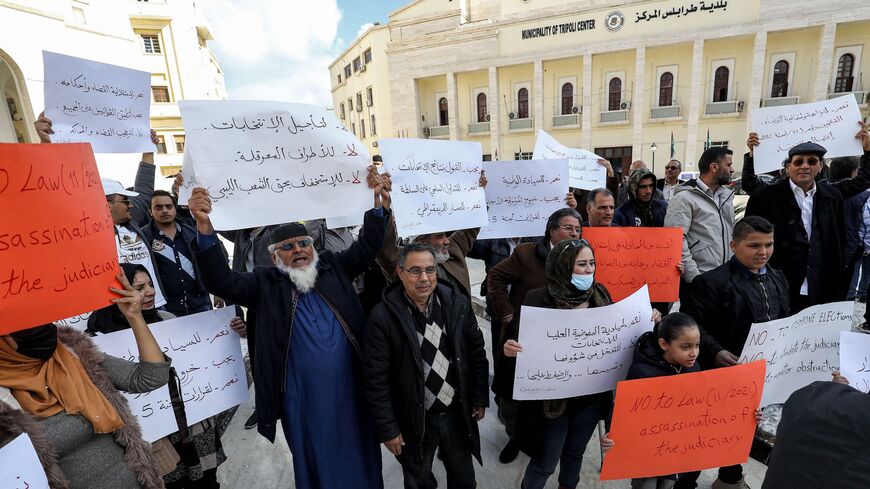 Local activists demonstrate at Algeria Square outside the Tripoli Municipality in the Libyan capital on Dec. 15, 2021, to protest the possible postponement of the elections scheduled for Dec. 24. - MAHMUD TURKIA/AFP via Getty Images

Libya’s electoral commission has suggested moving the long-awaited presidential election to Jan. 24 after a parliamentary committee acknowledged it would be “impossible” to hold the polls in two days' time.

The UN-sponsored, Western-backed election was meant to reunite Libya a decade after the toppling of longtime dictator Moammar Gadhafi. The vote was originally planned for Dec. 24, coinciding with the 70th anniversary of Libya’s independence. But with days to go, Libya’s rival entities have yet to agree on a legal framework for the elections or a final list of approved candidates.

In a letter to the parliament head on Wednesday, Al Hadi al-Sagheer, the chairman of the parliamentary committee charged with overseeing the elections, cited “technical, judicial and security reports” in writing, “We inform you of the impossibility of holding the elections on the date of December 24, 2021, provided for by the electoral law."

Libya’s High National Electoral Commission then issued its own statement after “liaising” with the parliament, recommending the vote be rescheduled for Jan. 24, 2022.

Human rights groups had documented widespread intimidation and attacks on election officials in the run-up to the polls. Amnesty International called on the rival parties to “immediately instruct all armed groups and militias under their command to end their harassment and intimidation of electoral officials, judges and security staff.”

On Tuesday, armed men blocked roads in the suburbs of Tripoli, and in western Libya on Monday, gunmen shut down four major oil fields.

In a statement Wednesday, US Ambassador to Libya Richard Norland urged calm in the capital and elsewhere in Libya, warning of “armed deployments that risk escalation and unintended consequences.”

“The United States shares the concern and disappointment of the vast majority of Libyans who expect to have the opportunity to vote for their country’s future,” Norland said.

Nearly 100 people are vying for the top post. Candidates included Libyan warlord Khalifa Hifter and Saif al-Islam, the son of Gadhafi who is wanted by the International Criminal Court for crimes against humanity. Libyan Prime Minister Abdulhamid al-Dbeibah is also running, despite previously pledging not to seek the war-torn country’s highest office.