Elections scheduled for Dec. 24 are now uncertain because of haggling among Libya's political factions. 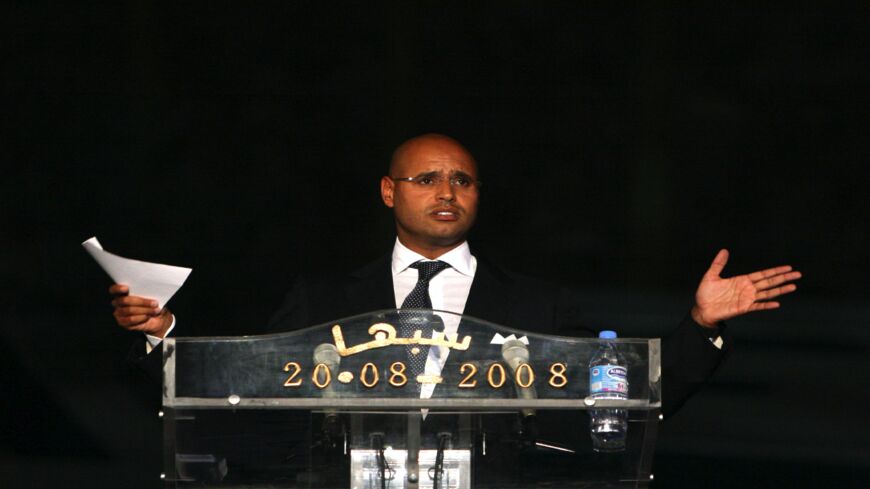 Saif al-Islam Gadhafi, late leader Moammar Gadhafi's second son and once heir, will run in Libya’s Dec. 24 presidential elections. The High National Election Commission (HNEC) objected to his application, but a court in the southern city of Sabha reinstated him on Dec. 2, rejecting HNEC’s appeal.

Gadhafi was among 25 others who were disqualified, most of whom have now been readmitted into the crowded race. HNEC’s Resolution 79 cited missing documents and noncompliance with the presidential election law.

Gadhafi is wanted by the International Criminal Court (ICC) for alleged crimes against humanity during the uprising of 2011 that toppled his late father. At the time, he had no official role in either the government or the army and security forces. In 2015, he was tried and sentenced to death by a court in Tripoli heavily criticized by international rights groups. Two years later, he was released after Libya’s parliament passed a general amnesty law from which he and many others benefited.

Gadhafi was out of the public view between 2017-2021, prompting speculation about his whereabouts and whether he was even alive. During that time, he was active behind the scenes, meeting supporters and mediating tribal conflicts, particularly in southern Libya.

Yusuf, one of his closest associates (he requested that his family name not be published), told Al-Monitor that the young Gadhafi “was always active, working almost every day.” According to Yusuf, Gadhafi “played a very successful role in reconciling two of Sabah’s biggest tribes” last year.

He also kept in contact with his representative in Europe, Mohammed Abu Ajeila al-Ghadi, who went on to represent him in the UN-led dialogue that elected Libya’s Unity Government Prime Minister Abdul Hamid Dbeibah, whose government gained a vote of confidence on March 10.

In a surprising move, Gadhafi gave his first interview in over a decade to The New York Times magazine in which he said my guards “are now my friends,” referring to the Abu Bakr Al-Siddiq Brigade, an armed group based in the western city of Zintan, which first captured him in November 2011 as he tried to flee the country after the fall of his father’s government a month earlier.

The same group would secure his trip across more than 700 kilometers (434 miles) to Sabha in the south to register Gadhafi on Nov. 14 for the presidential elections.

Now that he is officially in the race despite the HNEC’s attempts to disqualify him, his close supporters are keeping a watchful eye over what might transpire. Yusuf believes there is a concerted effort by different political actors and “foreign countries” to have him disqualified from the race. Without naming any specific country, Yusuf said, “Many countries do not like him.”

When asked whether Gadhafi stands a chance in winning the elections, Yusuf said, “[I’m] 100% sure that Saif will win.” Libya has neither official nor professional opinion polls, but Yusuf pointed to social media as an indicator. "All over Facebook, [Saif] is the favorite contestant.” In the absence of any official polls, relying on social media becomes the obvious choice to get a read on the mood of the general public.

The same opinion is shared by Suleiman Hussein, a social sciences professor at Tripoli University, who thinks Gadhafi is “popular and lucky at the same time.” His popularity was reflected in people taking to the streets in many Libyan towns in celebration when he first announced his candidacy. "The continued failure of all governments” that came to power since 2011 is “the most effective campaigner in support of Saif. This is what makes him lucky too,” he added.

Libya has gone through difficult spells of civil war, helped by NATO, which toppled the Gadhafi government in October 2011. Living conditions for ordinary people have deteriorated, and many Libyans now are unable to afford basic necessities. Hussein said, “Libyans support Saif because they miss his father,” the late colonel who was murdered on Oct. 20, 2011. “Libyans miss the security and peace” provided by the senior Gadhafi, said the professor.

Social and tribal leader Ali Aljamal, from Bani Walid southwest of Tripoli, told Al-Monitor in a phone interview that “Bani Walid and many other cities” are voting for “their son (Saif).” The mountain town has always been pro-Gadhafi, and it is only “logical that we vote for his son,” he added.

Saad Ibrahim, from Sirte, the late Gadhafi’s birthplace, told Al-Monitor over the phone, “I think Saif will win at least 70%” of the votes in the city of around 120,000 people." Ibrahim, a lawyer and social activist, thinks Sirte has a chance now to “show where its loyalty lies.”

The coastal city suffered tremendous losses and destruction during the civil war of 2011, and it was there that Gadhafi, the father, made his last stand against the rebels. In 2015, the city became the stronghold of the Islamic State before the terror group was ejected a year later.

As for the ICC arrest warrant for Gadhafi, Ibrahim told Al-Monitor, “The ICC has no bearing on Libya’s internal affairs.” Libya is not party to the international court, and “it is not alone in being outside the court."

A former US diplomat with strong ties to the Biden administration speaking anonymously told Al-Monitor that “America would not mind” dealing with Libya even if Gadhafi is elected president. “I do not expect Saif to be officially received in Washington,” but dealing with his government would not be a problem, the former diplomat added.

Still, Gadhafi’s supporters are worried about what might be "cooking behind the scenes," as Ibrahim puts it. It is unclear if the elections will take place in a few days.

Stephanie Williams, the former acting UN envoy to Libya who is credited with mediating the deal that made elections possible, returned after leaving the mission last summer. UN Secretary-General Antonio Guterres appointed Williams on Dec. 6 as his special adviser on Libya after his current envoy, Jan Kubis, announced his resignation last month.

While Williams will not take over the UN mission, she will be in charge of the political file in Libya, including elections. Last year and earlier this year, she succeeded in bringing Libyan factions to a series of negotiation rounds that produced the political roadmap that called for the December elections. The experienced former US diplomat also played an active role in brokering the October 2020 cease-fire that is still holding.

Gadhafi’s close advisers believe Libya’s future is at stake and their man is in the best position to return security and stability. They point to the fact that he has not been involved in any violence in the country since 2011, which, according to Yusuf, makes him “favored by the majority of Libyans.” The big question remains whether the polls will actually open on Dec. 24. And if they are delayed, as most expect, when will Libyans get the chance to vote for their president?