As soon as Saif al-Islam, the son of late Libyan President Moammar Gadhafi, announced his plan to return to political life, media outlets close to the regime in Egypt rushed to announce their support, thus raising many questions about Egypt’s position and whether Cairo would support him if he runs for the upcoming presidential elections in neighboring Libya. 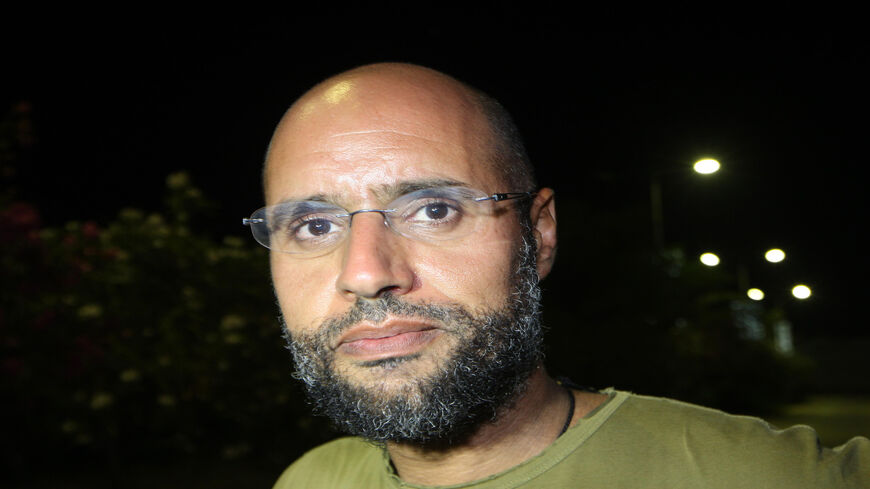 CAIRO — Seif al-Islam Gadhafi, son of late Libyan President Moammar Gadhafi, reared his head again, 10 years after his disappearance following the outbreak of popular protests against the Gadhafi regime back in February 2011.

In an interview published by The New York Times Magazine July 30, he revealed his intention to return to political life: "After an awkward silence, I asked Seif if he was still a prisoner. He told me he was a free man and was organizing a political return. The rebels who arrested him a decade ago became disenchanted with the revolution, he said, and eventually realized that he could be a powerful ally. Seif smiled as he described his transformation from captive to prince in waiting. 'Can you imagine?' he said. 'The men who used to be my guards are now my friends.'”

Seif al-Islam said in the interview with New York Times Magazine reporter Robert F. Worth conducted back in May that he was no longer a prisoner and that he is arranging for his return to the political arena. He said the fighters who arrested him 10 years ago have become free of the illusion of revolution and have come to the realization that he could serve as a powerful ally for them.

Seif al-Islam was captured by rebel fighters following the ouster and killing of his father in 2011. A Libyan court sentenced him to death in 2015, before releasing him two years later. Since then, he has been living in hiding in the northwestern city of Zintan.

“They raped the country — it’s on its knees,” he said in his interview. “There’s no money, no security. There’s no life here. Go to the gas station — there’s no diesel. We export oil and gas to Italy — we’re lighting half of Italy — and we have blackouts here. It’s more than a failure. It’s a fiasco.”

As soon as he reappeared to the public eye, pro-regime Egyptian media outlets rushed to defend him and announce their support for him.

On his TV program “Bel War’a wel Alam” ("Paper and Pen") broadcast July 31, Neshat al-Dhehi, a journalist close to the Egyptian government, promoted the candidacy of Seif al-Islam in the upcoming Libya elections slated for Dec. 24. He said that Seif al-Islam admitted that there were mistakes before 2011 “during the rule of his father, Moammar Gadhafi.”

Dhehi accused foreign intelligence services of tampering with the Libyan internal scene and distorting the image of Seif al-Islam with the aim of keeping him from running for the Libyan elections.

He continued that Seif al-Islam intends to run for the elections and is now seeking to salvage Libya and fulfill the popular desire. However, he added, Seif al-Islam refuses to ascede to power through military force or to be imposed by a certain side.

Amr Abdel Hamid, a pro-regime journalist, said on the “Rai Aam” ("Public Opinion") program Aug. 1 that Seif al-Islam tried, through his interview, to urge the Libyans to participate in the upcoming elections in order to get Libya out of its repression.

Abdel Hamid tried to acquit Seif al-Islam from the crises that the Libyan citizens suffered during his father’s rule, saying that he had always sought to solve the country’s crises, but a conspiracy was being hatched in Libya to bring the country down.

Egyptian member of parliament Mustafa Bakri told Al-Monitor that Seif al-Islam will change the equation in Libya, not only because he is Gadhafi's son, but also because he has a vision and many supporters across Libya, unlike any other political faction that is present in a particular region. Bakri believes Seif al-Islam may be an option for Libyan reunification.

Seif al-Islam enjoys the support of all Libyan regions, as he is backed by the Qadhadhfa, Magarha and Warfalla tribes, who are spread across the city of Sirte in central Libya; Bani Walid and Shwerif in western Libya; and Brak al-Shati and Sabha in the south.

On Aug. 21, 2020, rallies were held in several Libyan cities calling for the nomination of Seif al-Islam in the presidential elections.

Bakri indicated that there are some legal obstacles that could hinder Seif al-Islam’s candidacy, which he said must be based on a strong popular opinion and should result from consultations with various political forces.

On July 28, 2015, the Tripoli Criminal Court issued a death sentence in absentia against Seif al-Islam and eight members of the former regime, including Abdullah al-Senussi, former intelligence chief, and Baghdadi al-Mahmoudi, the last prime minister of Gadhafi’s regime, on charges of committing war crimes and killing citizens during the Libyan revolution that erupted in February 2011.

This year, on May 27, the Supreme Court of Libya — the highest judicial authority — ruled to overturn the death sentence issued against Seif al-Islam and to accept the appeal.

On Sept. 9, 2020, the Appeals Chamber of the International Criminal Court (ICC) unanimously ruled that the case against Seif al-Islam for crimes against humanity was accepted and heard before the court.

Recently, on Aug. 3, the Libyan House of Representatives based in Tobruk and headed by Aguila Saleh, discussed a draft law regulating the presidential elections, along with the conditions and procedures for candidacy for the presidency.

In an attempt to respond to Seif al-Islam’s statements, Saleh stressed during the Aug. 3 parliament session that no person convicted by the ICC shall be entitled to run for the presidency of Libya.

Asked about Egypt’s support for Seif al-Islam in the upcoming elections, Bakri said that Egypt’s policy is clear and based on the stability of Libya and confronting extremist groups that drain Libya and plunder its resources.

He stressed that Egypt will support the person that the Libyans will choose and the person capable of uniting Libya and putting an end to the years of chaos and collapse that it witnessed in the wake of the fall of Gadhafi’s rule.

Libyan member of parliament Ali al-Saidi told Al-Monitor that Seif al-Islam has the right to run for the upcoming presidential elections, and that the decisions of the ICC are not binding.

Asked about the Egyptian stance on Seif al-Islam’s candidacy, Saidi said that Egypt is well aware that Libya’s security affects its own security. He stressed that the security and stability of Libya will only be established if a person who is able to reunite the Libyans arrives at the helm to fight the armed militias backed by Qatar and Turkey and seeking to control the Libyan soil and its wealth.

On Sept. 18, 2018, high-ranking Libyan and Egyptian sources from within a committee concerned with the Libyan file, revealed to Al-Araby Al-Jadeed newspaper that a high-level meeting had been held between Seif al-Islam and officials from Egypt and the United Arab Emirates to discuss ways to rearrange the Libyan house, Seif al-Islam’s political future and the possibility of using him again to unite some Libyan tribes around him.

Meanwhile, on Libya’s eastern military commander Khalifa Hifter, who enjoys the backing of Egypt, Khaled al-Mishri, head of the Muslim Brotherhood-controlled High Council of State, which serves as an advisory body to the Tripoli-based government, said in a panel discussion on the “Club House” app, which was reported by the media June 26, that most of the international powers, notably Russia and Egypt, have abandoned Hifter.