With the backing of the tribes and communities who supported his father, Saif al-Islam could be bringing back the old regime with his run for president. 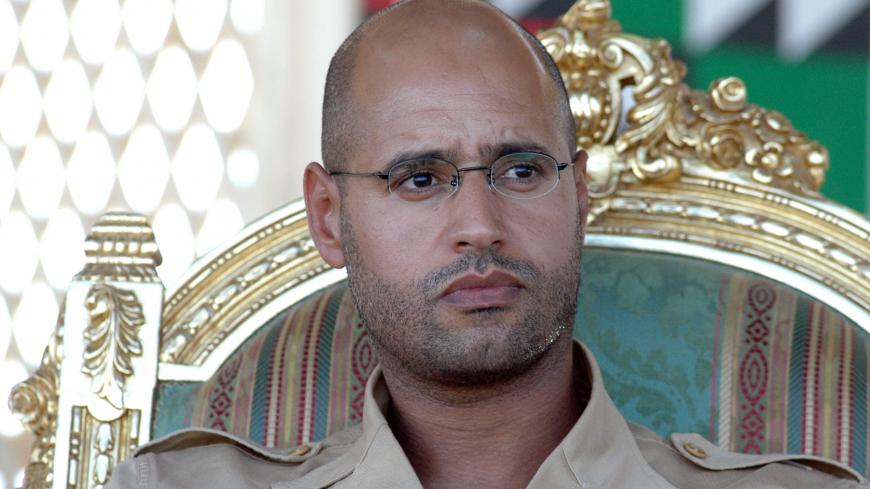 Saif al-Islam, the son of the late Libyan leader Moammar Gadhafi, attends a ceremony to mark the arrival of water from the Great Manmade River in the southern Libyan city of Ghiryan, Aug. 18, 2007. - GETTY/Mahmud Turkia

News that Moammar Gadhafi's most prominent son, Saif al-Islam, intends to run for president is raising fears and hopes that the old regime could return to power in Libya through the ballot box.

He could have a reasonable chance to win, especially now that Gen. Khalifa Hifter — the leader of the Libyan National Army who has hinted that he could run for president — was reportedly admitted to a hospital in Paris after suffering a stroke on April 11.

On March 19, Saif al-Islam announced through his lawyer that he plans to run as the head of the Popular Front for the Liberation of Libya, a political party with a stated mission to unify the country. However, many Libyans still don’t know what to make of his candidacy.

There are even rumors that Saif al-Islam could be dead. Since militias from the northwest city of Zintan ostensibly released him in June 2017, he hasn’t issued an announcement himself or made a public appearance.

But Khaled Mohammad, who belongs to the same Qadhadhfa tribe as the Gadhafis, claims to have secret information that confirms he is alive. Mohammad is one of more than 2 million people signed up to vote in the next election, and he insists that Saif al-Islam is running for office at the request of the tribes and communities who support him.

“Nobody has the right to be mad if Saif al-Islam becomes Libya’s ruler through the ballot box,” said Mohammad, who lives in a Cairo suburb, to Al-Monitor over the phone. “The Qadhadhfa tribe was expecting him to run. We need Saif al-Islam to pull Libya out of chaos.”

The Warfalla tribe could also be a source of significant support for Saif al-Islam. Their stronghold is in the western town of Bani Walid, where Saif al-Islam sought refuge in the winding days of the Libyan uprising. And like most tribes who supported Gadhafi’s regime, the Warfalla have been marginalized by Libya’s competing authorities since the revolution.

Some of Gadhafi’s opponents nonetheless stress that Saif al-Islam shouldn’t be eligible to run for president until he is sent to The Hague, where he is wanted for committing crimes against humanity during the popular uprising in 2011. But Libya’s weak institutions would have to adopt an electoral law that bars suspected war criminals from campaigning in the elections, otherwise Saif al-Islam could become the head of state regardless of outstanding charges against him.

That’s been the case in Sudan, where Omar al-Bashir still reigns since the International Criminal Court issued a warrant for his arrest in July 2009. The difference, of course, is that Bashir was firmly in power when he was indicted.

“Saif shouldn’t technically be allowed to run in elections while he is an international outlaw,” said Jaber Elobidy, whom the elder Gadhafi threw in prison for 12 years in 1977 for belonging to a student union. “[Saif al-Islam] should be handed a fair trial, which Libya isn’t equipped to give him right now. That’s why he needs to be handed over to the International Criminal Court.”

Alice Alunni, a Ph.D. candidate at the School of Government and International Affairs at Durham University in England and an analyst on Libya, doesn’t believe that Saif al-Islam is a real threat to win the elections. The only way he could be a serious contender, she said, is by making a public appearance.

“If he made a public appearance, it would be a game changer,” she told Al-Monitor. “But he would have to demonstrate the same charisma and personality that he had during the 2000s. Only then would he rally support beyond the tribes that traditionally back him.”

However, appearing in public poses great risks. Tarek Megerisi, a Libyan analyst and a visiting fellow at the European Council on Foreign Relations, noted that lots of people would like to kill or arrest Saif al-Islam, which is probably why he never discloses his whereabouts. Despite his absence, Saif al-Islam still has a chance to win.

“Libyan elections aren’t different to other Arab elections; people often vote for the personalities that they know,” Megerisi said, over the phone. “But there are so many grievances against Saif al-Islam that some parties won’t accept the result if he wins. Some people might not mind him anymore, but others maintain a visceral hatred for [Saif al-Islam].”

Before the revolution, Saif al-Islam was branded a reformer. He acquired a degree from the London School of Economics despite allegations of plagiarizing his dissertation, and he was embraced by the likes of former British Prime Minister Tony Blair. But many Libyans turned against him after he denounced the rebellion and promised to spill “rivers of blood” in a televised speech on Feb. 21, 2011.

Public resentment has subsided since the overthrow of his father in 2011. For the last seven years, militias have hijacked the country by killing and kidnapping civilians with impunity. The anarchy has hampered service provisions and plummeted the value of the Libyan dinar, spurring a growing nostalgia for Gadhafi’s era that many Libyans associate with a period of stability.

But not everybody is yearning for the past. Laila Moghrabi, who participated in demonstrations against Gadhafi’s regime, said she won’t vote for Saif al-Islam since he shoulders much of the blame for the mess that Libya is in today.

“Saif al-Islam was one of the main figures in the old regime,” she told Al-Monitor. “And if he failed to improve the country before [the revolution], then he won’t succeed today.”

Elobidy, the political prisoner from Gadhafi’s era, adds that Saif al-Islam may have his own scores to settle if he rises to power again. Those deemed responsible for killing his father could be the first target, continuing the cycle of revenge that has doomed Libya since the revolution.

“Can Saif al-Islam forget about the hatred that so many Libyans had toward him and his father in 2011?” pondered Elobidy. “I doubt it. I think Saif al-Islam still views most Libyans as the people who killed his dad.”