A Libyan court handed down a death sentence to Saif al-Islam Gadhafi and former Libyan officials, sparking widespread criticism of the legitimacy of the trials. 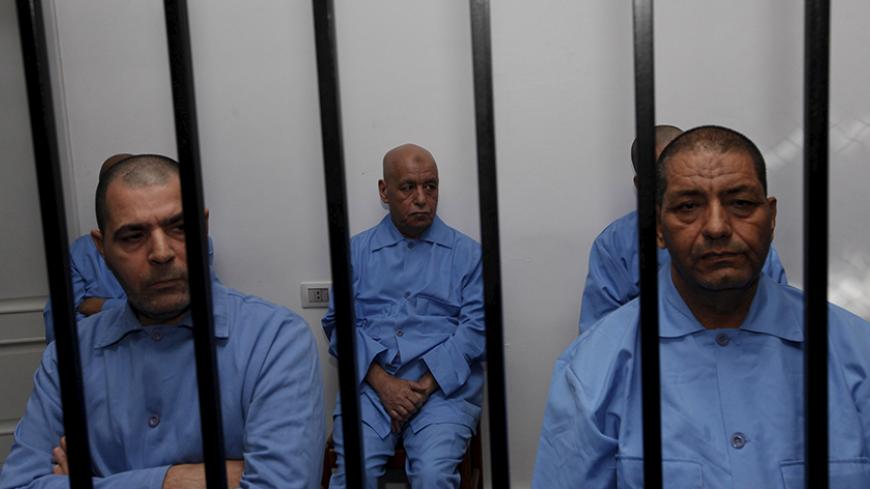 Baghdadi al-Mahmoudi (C), former prime minister in the Gadhafi regime, and other Gadhafi regime officials sit behind bars during a verdict hearing at a courtroom in Tripoli, July 28, 2015. - REUTERS/Ismail Zitouny

A court in Tripoli sentenced Saif al-Islam Gadhafi, son of late Libyan leader Moammar Gadhafi, and eight former officials to death by firing squad. Saif al-Islam was not present at the court but appeared via video at the start of the proceedings. He is being held in the western mountain town of Zintan, having been captured by Zintan militias in November 2011 after the collapse of his father’s regime under attack by local rebel fighters and a NATO air campaign. Among the former officials tried and convicted were intelligence chief Abdullah al-Senussi, Prime Minister Baghdadi al-Mahmoudi, military commander Mansour Dao and external intelligence chief Abu Zeid Dorda.

All the defendants have the right to appeal. Their sentences must be confirmed or rejected by Libya’s Supreme Court within 60 days. The legal proceedings and convictions have elicited condemnation from law experts and international rights groups, including Human Rights Watch (HRW) and the International Bar Association.

After sentencing, John Jones, Saif al-Islam’s London-based attorney, called the proceedings a “show trial,” questioning the legitimacy of the entire process. “The whole thing is illegitimate from start to finish,” he charged, labeling the verdict a “judicially sanctioned execution.” Jones had been leading efforts to have Gadhafi tried before the International Criminal Court, at The Hague, which had issued an arrest warrant for him in June 2011.

Tripoli has been under the control of a coalition of Islamists and Misrata militias since August 2014, when they overran the capital, driving out the elected government and installing their own, headed by Prime Minister Khalifa al-Ghawil. All its departments are being run by officials loyal to the militias.

In a July 28 Associated Press interview, Joe Stork, HRW's deputy Middle East and North Africa director, questioned the fairness of the trial. “This trial has been plagued by persistent, credible allegations of fair trial breaches that warrant independent and impartial judicial review,” he said. HRW described the trial as “flawed,” pointing to what it said are “serious questions about whether judges and prosecutors can be truly independent where utter lawlessness prevails,” highlighting that certain groups are “unashamedly shielded from justice.” The UN Office of the Commissioner for Human Rights cast doubt on the trial’s fairness because of the failure to “establish individual criminal responsibility, lack of access to lawyers, claims of ill-treatment, and trials conducted in absentia.”

The verdicts will have serious repercussions on an already chaotic situation in Libya. Should the death sentences be carried out, although unlikely anytime soon, the ongoing reconciliation process will suffer further delays and possible collapse. The convicted men are leading figures in prominent tribes that were loyal supporters of the late leader, with their tribal members representing a large segment of Libyan society. Saif al-Islam and Senussi are from the Gadhafa and Magharha tribes, respectively, and surrounding them are at least another four major tribes, representing the core support of the former regime. They are already perceived as being opposed to the current regime because they refused to back the uprising in 2011.

After the verdicts were announced, demonstrations erupted in cities and towns across the country, including in Brak, Qirah, Sebha and Shuwairif, in the south, and in Sirte, Gadhafi’s coastal hometown. The protesters, who consider the trials politically motivated and unfair, also voiced their opposition to the militia-Islamist coalition controlling Tripoli and large swaths of western Libya.

Worried about possible repercussions, the United Nations Support Mission in Libya (UNSMIL) expressed its “concerns” about the legal proceedings before as well as during the trials. In one statement, UNSMIL said that “the trial did not meet international standards of fair trial in a number of ways.” Bernardino Leon, head of UNSMIL, already has more than enough problems to deal with trying to get the warring parties to reach some kind of settlement.

UNSMIL’s proposed political settlement revolves around setting up an inclusive national unity government consisting of the two rival governments, building a national army and organizing new elections. The timing of the verdicts' announcement will make it harder for Leon to move forward on a political settlement, which he has been seeking for months.

Some of Libya’s neighbors, in particular Tunisia, are already dealing with repercussions from the verdicts. Tunisian authorities had handed over Mahmoudi, the last prime minister under Gadhafi, despite the absence of any guarantee he would not face the death penalty if convicted. While in detention in Libya, he repeatedly complained of ill treatment to his lawyers and family. The Committee for the Respect of Freedom and Human Rights in Tunisia was quick to accuse its country’s government of sending Mahmoudi to “his death.”