Will Gadhafi's son be Libya's next leader?

After his release, analysts are debating whether Seif al-Islam Gadhafi, the son of late leader Moammar Gadhafi, will be playing a role in Libya’s political scene from the inside or from abroad. 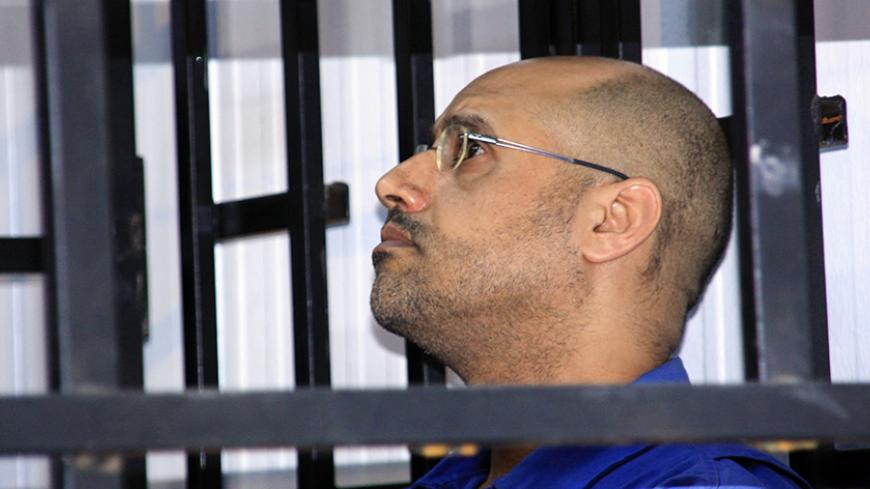 Seif al-Islam Gadhafi, son of late Libyan leader Moammar Gadhafi, attends a hearing behind bars in a courtroom in Zintan, May 25, 2014. - REUTERS

Seif al-Islam Gadhafi, the son of late Libyan leader Moammar Gadhafi, has been released from jail in Zintan, a town in western Libya, after spending nearly five years there since his capture in November 2011. After his father was killed on Oct. 20, 2011, by rebel groups that captured his hometown Sirte with NATO help, Seif tried to leave Libya.

In August 2015, the young Gadhafi was sentenced to death by firing squad by a Tripoli-based court. However, the sentence was not carried out and was condemned by Human Rights Watch that accused the self-proclaimed government of politicizing the courts.

Seif never attended the court’s hearings, as he did not fall under the authorities in Tripoli because he was jailed in Zintan, whose local authorities and militias are allied with the Tobruk-based government that consider themselves part of the Libyan Armed Forces led by Gen. Khalifa Hifter. Fearing for his safety, he did not attend his trial. Instead he spoke to the court via video.

The Tobruk-based government is the elected government of Libya and recognized internationally; however, it was forced to flee the capital in August 2014 when Islamist-led militias proclaimed their own government in Tripoli.

In addition, the International Criminal Court (ICC) indicted Seif, his father and Gadhafi’s chief of intelligence Abdallah Sanusi. The ICC dropped the case against Gadhafi after his death and accepted that Sanusi be tried in Libya.

In 2015, one of Seif's regular visitors told Al-Monitor on condition of anonymity that the only obstacle for his release is his safety once he leaves prison. Keeping him in Libya requires “huge security arrangements, and taking him abroad will mean that he will have little influence on events inside the country,” the source said.

His release was legally based on the general amnesty law passed by the internationally recognized Libyan government and enacted by the Zintan court. His defense team announced July 6 that he had been released April 12 and that for security reasons the news had not been made public. It was decided that it would be in Seif's best interest to remain in Zintan, which pledged to protect him as long as he stayed in town. Karim Khan, who led Seif's defense team, announced that his team of lawyers will ask the ICC to drop the case against Seif, since he has already been tried in Libya for the same crimes and thus cannot be tried again.

Now that Seif has been released, the question is what role he could play in the war-torn country. Sources close to him have informed Al-Monitor that he has already started contacting people inside Libya and abroad who are supporting him, trying to come up with his own plan to salvage the country.

He is positioned to play a role within the tribal structure in Libya. The majority of tribes that supported his father in the 2011 civil war see him as a savior, and they are willing to support him as their de facto leader in any political process to bring about national reconciliation and reunify the country. This is especially true since the United Nations-brokered political dialogue and the Government of National Accord have so far failed to deliver stability and security, let alone anything tangible to alleviate the hardships Libyans are facing on a daily basis, which include power cuts, shortage of money in the banking system and soaring prices.

Al-Monitor learned, by having been part of these discussions, that tribal leaders who support Seif are willing to accept him as their only representative, or what is known in tribal customs as “next of kin.” This means he will be the only person responsible for accepting any terms of a reconciliation accord that might be reached in exchange for agreeing to forgive crimes committed by the rebels since 2011, such as murders for the sake of national reconciliation.

Politically and in the face of the deteriorating security and economic situation in the country, many Libyans are looking to Seif as a potential positive player, given the failure of the successive governments that have run the country since October 2011. In fact, those who supported his father make up the majority in absolute numbers, and if organized behind an effective leadership with certain tribal and political credentials, they could be a very effective force that will be hard to ignore.

Also, the tribal forces in the country have largely been sidelined by the successive UN envoys to Libya who tried — and so far have failed — to make any tangible progress in saving the country. One of the reasons for this has been the lack of organization of the tribes within one political entity that could be taken seriously as a credible negotiating partner. Indeed, tribes opposing the so-called February 17 Revolution have organized themselves in what is known as the Supreme Council of the Libyan Tribes, but it lacked political coherence and strong leadership backed by a clear mandate to lead. This role could well be played by Seif, as he enjoys wide public support and clear tribal credentials starting with his own Gadhafa tribe.

In a tribal society like Libya, tribes — particularly the major ones such as Warfalla and Tarhuna — are the cornerstone of any future settlement in the country, and without involving them, little can be achieved, as has been the case for the last five years. Successive UN mediators have so far failed to do much in solving Libya’s political turmoil, mainly because they ignored the tribal base of the country. In this context, Seif could play a major political role.

Seif's release also coincided with the recent release of six high-ranking officials from his father’s regime who were in jail in Tripoli. The released officials include Mohamed al-Zwai, the last parliament speaker under Gadhafi, and former undersecretary Mohamed al-Sharif. The move appears to be a step on the long road of reconciliation in Libya without which no side could solemnly rule the country, let alone help it heal its wounds.