The council also called for a cease-fire and extended the UN mission in Libya by another 12 months. 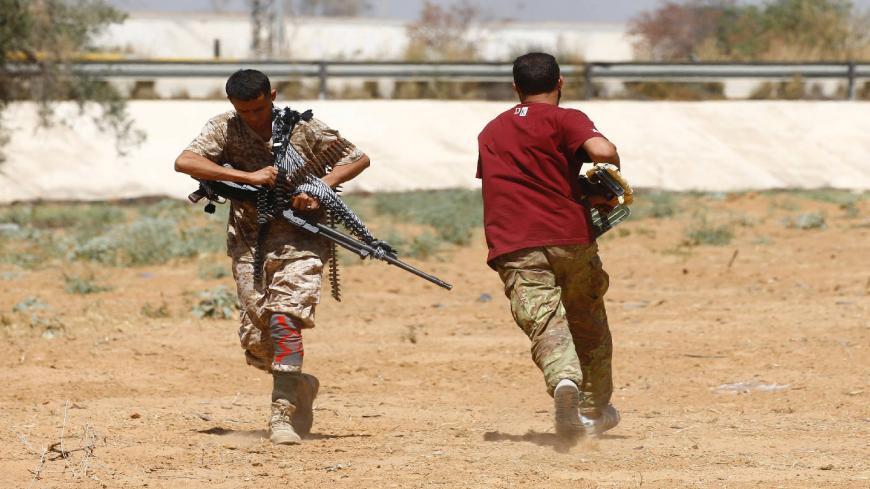 Fighters loyal to the internationally recognized Libyan Government of National Accord (GNA) open fire from their position in al-Sawani area south of the Libyan capital, Tripoli, during clashes with forces loyal to strongman Khalifa Hifter, on June 19, 2019. Despite a UN arms embargo, weapons are still flowing into Libya. - MAHMUD TURKIA/AFP via Getty Images

The UN Security Council is urging the parties to Libya’s conflict to abide by a United Nations arms embargo and pull their proxy fighters from the war-torn country.

In a resolution adopted Tuesday, the 15-member body extended the UN’s mission in Libya by another 12 months. China and Russia abstained. The mission, known as the United Nations Support Mission in Libya, monitors human rights violations in Libya and aims to secure a cease-fire between the warring factions.

Libya descended into chaos after a NATO-backed uprising toppled dictator Moammar Gadhafi in 2011 and for the past six years has been embroiled in a civil war pitting two rival administrations against each other. The Turkey-backed Government of National Accord (GNA) is based in the capital, Tripoli, and Khalifa Hifter’s self-styled Libyan National Army (LNA) controls much of the eastern part of the country with the support of Russia, the United Arab Emirates and Egypt.

The foreign backers for both sides have flooded the country with mercenaries and arms in violation of a UN embargo in place since 2011. The UN's acting Libya envoy, Stephanie Williams, told the Security Council on Sept. 2 that countries are stockpiling arms in a clear breach of Libya’s sovereignty. The arms buildup comes ahead of a looming battle for the oil-rich city of Sirte, which Hifter’s LNA has occupied since January.

Last week, the Pentagon said two Russian jets had crashed since deploying to Libya in May to bolster Hifter’s forces. The US Africa Command believes more than a dozen Russian fighter aircraft are being flown by pilots from Kremlin-linked private security contractor Wagner Group.

Also on Tuesday, the Security Council asked UN Secretary-General Antonio Guterres to appoint a new special envoy to Libya. Ghassan Salame, a former culture minister in Lebanon, cited stress when he quit the post in March after nearly three years as special envoy.

The new UN resolution calls on countries “to commit without delay to a lasting cease-fire and political dialogue under the leadership” of the new envoy.