UN acting Libya Envoy Stephanie Williams told the Security Council that foreign powers are fortifying their assets at air bases in the east and west of the war-torn country. 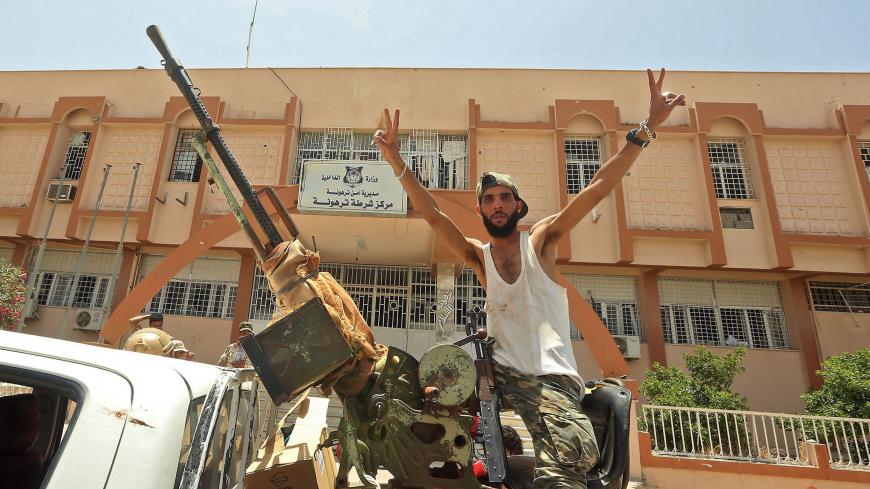 A fighter loyal to Libya's UN-recognized Government of National Accord (GNA) poses for a picture while seated in the turret in the town of Tarhuna, about 65 kilometers southeast of the capital Tripoli on June 5, 2020, after the area was taken over by pro-GNA forces from rival forces loyal to strongman Khalifa Hifter. - MAHMUD TURKIA/AFP via Getty Images

UN acting Libya Envoy Stephanie Williams warned on Wednesday that Libya is at "a critical juncture" as foreign powers flood the oil-rich country with weapons and coronavirus infections spiral out of control.

During that period, nine cargo vessels arrived in support of the GNA and three in support of Hifter’s forces, said Wiliams, describing the arms buildup as a clear breach of Libya’s sovereignty. The stockpiling of advanced weaponry and equipment, she said, is also a violation of the UN arms embargo that has been in place since the uprising that toppled longtime dictator Muammar Gaddafi in 2011.

“Foreign sponsors are fortifying their assets at key Libyan air bases in the east and west,” Williams said, without specifying which countries. “The [UN Libya] mission continues to receive reports of a large-scale presence of foreign mercenaries and operatives, further complicating local dynamics and chances of a future settlement.”

Libya is now embroiled in an escalating proxy war between two rival administrations and their array of foreign backers. Hifter’s self-styled army is backed by the United Arab Emirates, Egypt and Russia, and the government is supported by Turkey.

The fighting has slowed since a more than yearlong offensive ended in June with the GNA regaining full control of the capital of Tripoli. Now, a battle is looming over the oil-rich city of Sirte, which Hifter’s LNA has occupied since January.

Earlier this year, a UN report said as many as 1,200 military contractors from Russian private security firm Wagner Group were operating in Libya to bolster Hifter’s forces. Moscow dismissed the report as biased.

A newer report obtained by Reuters, which was submitted to the UN Security Council Libya sanctions committee, found that Russia sent some 338 cargo flights from Syria to Libya between November 2019 and July 2020. Russia, Turkey, the United Arab Emirates, Jordan and Qatar had all breached the arms embargo, according to the sanctions monitors.

Turkey, meanwhile, has enlisted Syrian rebels to join the fight against Hifter. A recent US government watchdog report said Ankara had sent to Libya at least 5,000 mercenaries from Syria, whose “continued presence will continue to negatively affect the overall security situation.”

Williams also expressed concern over Libya’s spiraling COVID-19 outbreak, noting that the number of confirmed cases has more than doubled in the last two weeks. As of Sept. 1, the conflict-ridden country has reported 15,156 cases and 250 recorded deaths, but the true number is believed to be much higher.