The head of US Africa Command (AFRICOM) and Washington’s ambassador to Libya urged western Libya’s Prime Minister Fayez al-Sarraj to return to the United Nations-backed cease-fire process during a meeting west of Tripoli on Monday, the State Department said. 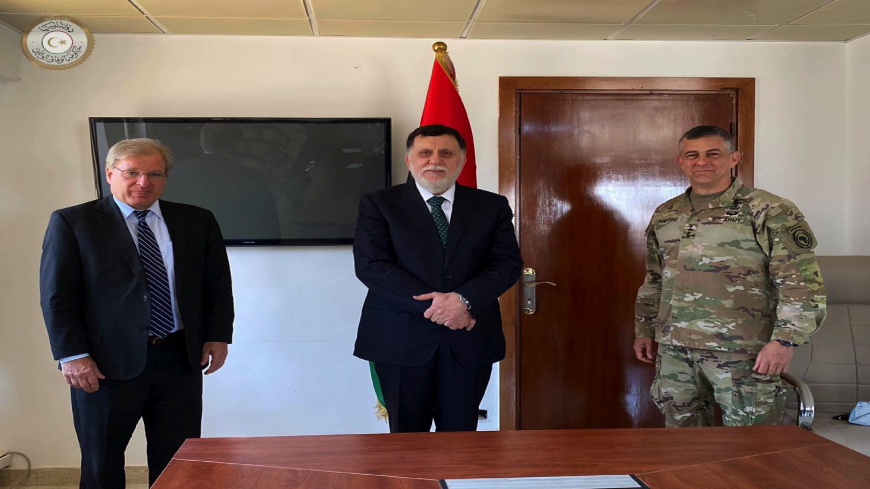 The head of US Africa Command (AFRICOM) and Washington’s ambassador to Libya urged western Libya’s Prime Minister Fayez al-Sarraj to return to the United Nations-backed cease-fire process during a meeting west of Tripoli on Monday, the State Department said.

Col. Christopher Karns, a spokesperson for US AFRICOM, emphasized to Al-Monitor that the meeting was led by Ambassador Richard Norland. The State Department said in an emailed statement that the discussions focused on “current opportunities for a strategic pause in military operations by all parties to the conflict.”

“Ambassador Norland outlined US support for the diplomacy underway through UN auspices to promote a cease-fire and political dialogue,” the statement read.

“[AFRICOM commander] Gen. Stephen Townsend presented his military perspective on the risk of escalation, the dangers posed by Russia’s support for Wagner operations and the strategic importance of ensuring freedom of navigation in the Mediterranean.”

The State Department said US officials will continue to engage with “the full range of interlocutors from across the country.”

Why It Matters: The United States has long avoided taking decisive action in support of either rogue Gen. Khalifa Hifter or the United Nations-backed government he is fighting against.

But with Russia and Turkey poised to escalate their rival military investments in the conflict, Washington has an interest in the war returning to a sort of equilibrium. The United States says al-Qaeda and the Islamic State exploit the fighting, and an eventual return to some level of cooperation over the country’s oil sector could help reduce both sides’ dependence on foreign actors.

The Government of National Accord (GNA) has so far been unlikely to accept calls for a cease-fire, given the existential threat posed to it by Hifter’s offensive against Tripoli launched last April. But the GNA’s breakout from the western capital in recent months has reversed some of Hifter’s most significant gains.

The coastal city of Sirte remains the next strategic prize. The GNA’s main backer, Turkey, has said Hifter’s forces must withdraw from Sirte in order for a lasting cease-fire to be feasible.

Norland has reportedly encouraged both Serraj and Hifter to pursue a cease-fire before, but Gen. Townsend’s presence at today’s meeting may have been a signal to Egyptian President Abdel Fattah al-Sisi, who threatened direct military intervention on Hifter’s behalf over the weekend if the GNA takes Sirte or al-Jufrah.

What’s Next: What comes next relies largely on how much Hifter’s backers are willing to invest in defending Sirte and how far Turkey is willing to go with the GNA. The United Arab Emirates financed Hifter’s offensive on the bad bet that he could take Tripoli, and Russia’s reported interest in a potential future naval base at Sirte, even if true, may not be enough to warrant serious further military investment.

Turkey and the Tripoli-based government have a strategic interest in capturing Sirte and al-Jufrah from Hifter. Besides being important staging areas for future LNA operations, Hifter’s control of Libya’s oil crescent would be in jeopardy if the GNA takes the coastal city.

Know More: Fahim Tastekin explains the importance of Sirte for the future of Libya’s conflict.