Russian fighter aircraft recently delivered to Libya in support of Khalifa Hifter's campaign against the Tripoli-based government are now being put to use. 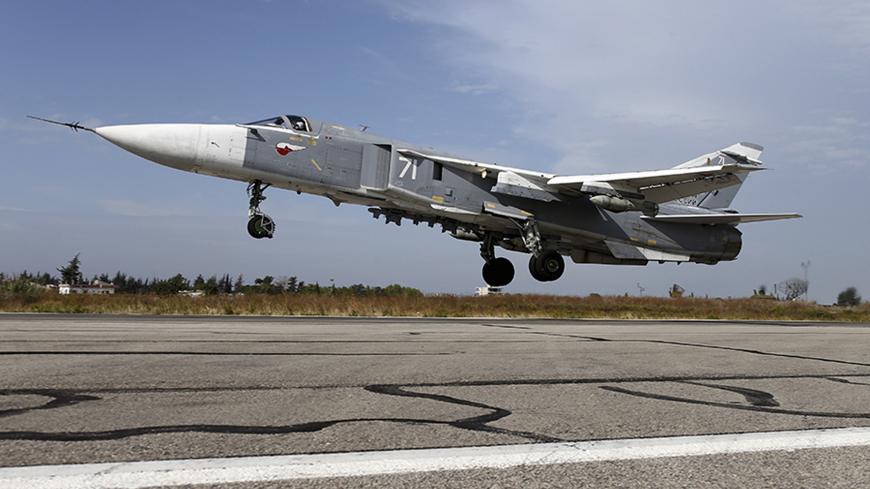 A Sukhoi Su-24 fighter jet takes off from the Khmeimim air base near Latakia, Syria, in this photograph released by Russia's Defense Ministry on Oct. 22, 2015. - REUTERS/Ministry of Defense of the Russian Federation/Handout via Reuters

Russian fighter aircraft recently delivered to Libya in support of Khalifa Hifter's campaign against the Tripoli-based government are now being put to use.

Imagery released by US Africa Command on Thursday shows an Su-24 attack aircraft using the runway at al-Jufrah air base in central Libya. AFRICOM also lent credibility to recent photographs purportedly showing a MiG-29 flying near the northern coastal city of Sirte, where the Tripoli-based government has focused its counteroffensive.

A spokesperson said AFRICOM does not yet know who the pilots are, raising concern that Wagner mercenaries or Libyan pilots without proper training may be preparing to use the aircraft in combat against the United Nations-backed Government of National Accord.

“The belief is the Russian pilots are conducting basic flying, working on proficiency and gathering situational awareness,” US Air Force Col. Christopher Karns, head of AFRICOM’s public affairs office, told Al-Monitor. “If it is Russian pilots, this would represent an escalation,” Karns said, adding that AFRICOM has no evidence the aircraft have yet carried out strikes.

Why it matters: Less than a year after then-national security adviser John Bolton reportedly assented to Hifter's offensive, AFRICOM raised the alarm that Russia’s foothold in Libya could develop into a strategic problem for NATO.

The al-Jufrah base has become increasingly important to Russia’s military support for the rogue general since the Government of National Accord routed Hifter's forces and their Wagner backers from areas around Tripoli in a sweeping counterattack over the past several weeks.

At least 14 Russian MiG-29 fighter and Su-24 attack aircraft arrived last month at the air base, which has served as a staging area for Wagner mercenaries retreating from Tripoli. A Russian-made mobile radar system has also appeared near the landing strip, according to AFRICOM.

The deliveries prompted the US military to accuse the Kremlin of trying to “tip the scales” in Libya’s civil war last month. The Trump administration so far refrained from providing decisive tangible support to either side.

But the United States is not counting on Russia to quit just yet. “They may … find working with Gen. Hifter difficult,” senior State Department official Christopher Robinson said last month. But “they do tend to not back down, even when they’ve made a bad bet.”