Egyptian President Abdel Fattah al-Sisi announced his country’s readiness to intervene militarily in Libya and train tribes there to fight militias allied with the Tripoli-based government. This has raised questions about the impact such a move would have on the battles in Libya. 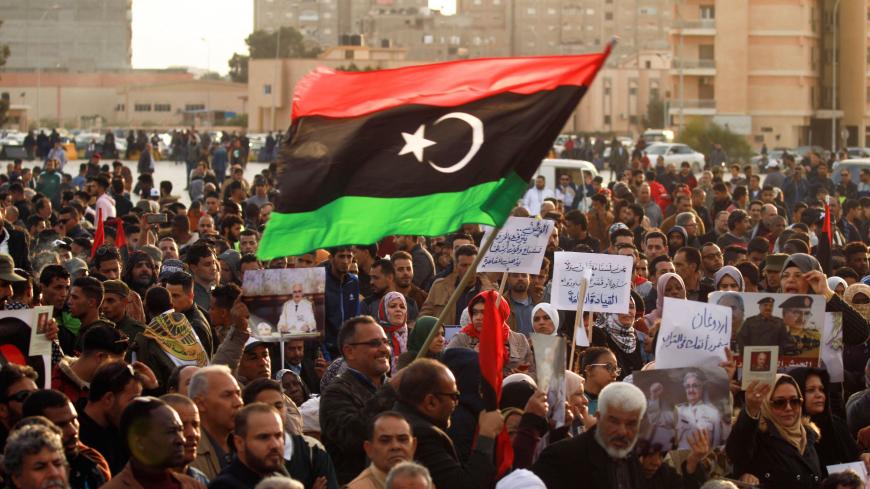 Supporters of Libyan military strongman Khalifa Hifter wave a national flag as they take part in a demonstration in the coastal city of Benghazi in eastern Libya against Turkish intervention in the country's affairs on Feb. 14, 2020. - ABDULLAH DOMA/AFP via Getty Images

CAIRO — The Libyan National Army (LNA), led by Field Marshal Khalifa Hifter, on June 28 sent military reinforcements from the 128th Infantry Battalion to the central Libyan region to repel any attempts by the Turkish-backed Government of National Accord (GNA) forces to advance toward the key city of Sirte and al-Jafra air base.

During an inspection tour of the Egyptian armed forces in the western military zone on June 20, Egyptian President Abdel Fattah al-Sisi had said that Egypt would not allow the Libyan pro-government forces to cross “Sirte and al-Jafra,” as these constitute a red line for Egypt’s national security. Sisi alluded to military intervention in Libya.

Taking control of Sirte would pave the way for tightening the grip on Libya’s oil ports in the east. Al-Jafra, which is located in the center of the country, is one of the largest air bases and a major operations room for the Hifter-led forces. In other words, controlling these two would lead to controlling the Libyan east, and this poses a clear threat to Egypt’s western borders, according to military experts.

Sisi’s statements and declaration of intent to militarily intervene in Libya come following a series of defeats suffered by Hifter’s forces over the past weeks against the GNA and the Turkey-led armed militias, most recently in Tarhuna, Hifter’s last stronghold in the west of the country from which he withdrew in favor of the GNA forces on June 5. Earlier, the GNA had regained full control of Tripoli and its suburbs after Hifter's attempts to liberate it from the grip of the militias in a battle he launched in April 2019.

In his remarks at the western military zone, Sisi announced for the first time Egypt’s readiness to train and equip Libyan tribal youth to confront the Turkish-backed militias and stop any progress they might make. Sisi addressed the tribes: “If we ask the Egyptian forces to progress, they will do so spearheaded by tribal sheikhs. And when the matter is over, the Egyptian forces will come out in peace because we do not want anything but the security, stability and peace of Libya. And if the Libyan people moved through you (the tribes) and demanded us to intervene, it would be a signal to the world that Egypt and Libya are one country with common interests: security and stability.”

Sisi’s call to arm tribal youth was widely welcomed, and residents of Tobruk issued a statement on June 20: “We, the civil society institutions, sages, dignitaries, sheikhs and citizens of the city of Tobruk and Dar al-Salam, Libya, support President Sisi’s speech announcing his will to stand by Libya and the Libyan people against the Turkish invasion and aggression and the Syrian armed militias.”

On Dec. 29, 2019, head of the Syrian Observatory for Human Rights Rami Abdul Rahman revealed that 300 Syrian fighters loyal to Turkey have been deployed to Libya to fight alongside GNA forces against Hifter’s army. Meanwhile, the LNA accused in a May 20 statement Syrian militias of killing Libyan civilians who were returning to their homes in Tripoli.

In a statement issued on June 20, the Council of Sheikhs and notables of Tarhuna announced its full support for Sisi's speech, as it stressed that Egypt’s intervention in Libya is legitimate in accordance with the Treaty of Joint Defense and Economic Cooperation.

The treaty, which was signed by Arab League member states in June 1950, calls for taking all necessary measures, including resorting to the armed forces, to counter any aggression on any member state and restore peace and security. The treaty also stipulated the creation of a joint military command that includes representatives of the Arab military chiefs of staff to organize the common defense actions.

The statement continued, “We are exposed to Turkish colonialism that seeks to control our capabilities, plunder our wealth, dismantle the social fabric, revive the Ottoman heritage, in addition to turning Libya into an incubator for terrorism, mercenaries and [the Islamic State].”

The council further called on Egypt to intervene immediately and implement Sisi’s speech.

On June 30, the people of Benghazi raised banners that read, “Egypt, the Heart of the Arab Nation,” thus expressing their endorsement of Egypt’s support to the Libyan people in the face of Turkish aggression.

On the same day, chairman of the Libyan Council of Elders Mohamed Idris el Maghrabi called for a mass demonstration throughout Libya on July 5 against the Turkish invasion. He stressed that the tribal youth will fight alongside the armed forces led by Hifter.

Benghazi witnessed a mass demonstration on July 5 in support of the LNA and to reiterate the people’s rejection of Turkish interference in Libya.

Head of the Cabinet of the Supreme Council of the Sheikhs and Notables of Libya Muhammad al-Misbahi told Al-Monitor he is preparing to organize a meeting in Cairo in the presence of tribes from all cities and regions to coordinate with the Egyptian side regarding the training and armament mechanism aimed at confronting the Turkish ambitions on their lands.

Misbahi said the council will allow the tribal youth to volunteer and will present them to the Egyptian leadership to train and arm them so that they are recruited in the LNA, led by Hifter, to fight the Turks and secure Sirte and al-Jafra, especially as the GNA is mobilizing its forces to advance toward the two sites and oil ports while rejecting any cease-fire initiatives.

On June 25, GNA forces announced their intention to continue advancing toward the city of Sirte. “There are no red lines impeding our forces’ advance toward Sirte,” Salah al-Din al-Namroush, the undersecretary of the Ministry of Defense in the GNA, said in an interview with the Anadolu Agency.

“The GNA forces are at the gates of Sirte, and the process of liberating it has not been delayed. Our forces are making some arrangements on the outskirts of the city,” he added.

On June 7, the GNA announced its rejection of a political initiative announced by Sisi to implement a cease-fire in Libya as of June 8, adding that it is seeking to control all Libyan territory.

Gamal Mazloum, a military expert and adviser at the Nasser Higher Military Academy, said that Sisi is seeking to win the support of the tribes in his battle to secure his borders with Libya, firstly to show the world that his entry into Libya came with the support and desire of the Libyan people, and secondly to benefit from the fighting experience of the tribesmen on their lands, which are located outside of the Egyptian borders and require extensive monitoring.

Asked about the intransigence of the Turkish side and the GNA and its insistence on advancing toward Sirte, Mazloum said, “I think Sisi is intent on entering Libya; his statements whereby Libya is a red line means that he will not back down from intervention.”

“If the [pro-government] forces cross Sirte and al-Jafra, east Libya will be under control, and this poses a threat to Egypt’s western borders and puts its national security at great risk.”

Mazloum concluded his statements by saying, “Sisi does not want to go to war in Libya, especially considering that Sirte is about 1,000 kilometers from Libya’s borders with Egypt. This requires increased efforts, weapons and huge costs, especially considering that Egypt is fighting on several fronts and cannot bear the costs of entering into war outside its borders. Developments on the ground, however, seem to be paving the way for war.”