Is 'grand political bargain' in store for Libya?

No matter which party is victorious in southwest Libya, if Misratan forces and Field Marshal Khalifa Hifter begin a full-scale battle for control, there is little doubt that the whole southern region will be destabilized as Russia’s increasing public support for Hifter and his anti-Islamist "strongman" credentials fuel the fire. 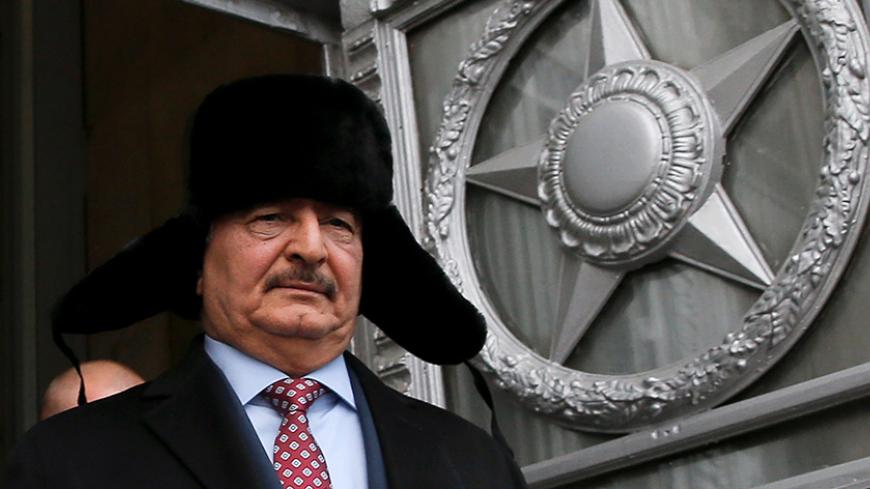 In Libya’s ever-shifting sands, where conspiracy and disinformation overlay a reality shaped by fluid political alliances, erratic military maneuvers and a crumbling economy, it can be challenging to paint an accurate and reliable picture of what is happening on the ground, let alone to predict how current events might shape the country’s future. Despite this uncertainty, all signs point to an imminent watershed moment for Libya. Is the United Nations process on the verge of collapse? Or can a new grand bargain be struck between the main factions? Is a full-scale shooting war in the offing? Or is the country en route to becoming a Russian satrapy?

Over the last month, the anti-Islamist Libyan National Army (LNA), under the command of Field Marshal Khalifa Hifter, has sought to extend its control outside of its traditional stronghold in eastern Libya, launching airstrikes against strategic air bases near Sebha in southwestern Libya and reinforcing the positions of its Zintani allies in the western region. These actions have brought the LNA into direct conflict with Misrata’s Third Force, a militia from the powerful city of Misrata that guards key military and infrastructural facilities in the southwest region, nominally under the auspices of the UN-backed Government of National Accord (GNA). The UN envoy to Libya has called "on all parties to act with restraint and to resolve issues through peaceful dialogue," yet the current situation is like the quintessential Libyan barbeque: The kindling is already smoking, and all it needs is a dose of gasoline to turn it into roaring flames that will engulf everything.

Russia’s increasing public support for Hifter and his anti-Islamist "strongman" credentials may be the fuel for this particular fire. On Jan. 11, Hifter was flown aboard a Russian aircraft carrier that has recently anchored off Libya’s eastern coast. He was given an official tour of the vessel before holding a video conference with Russia’s Defense Minister Sergei Shoygu and accepting a consignment of medical supplies. The move follows Russia’s pledge earlier this month to lift the UN arms embargo to allow Hifter to access weapons as well as recent visits by Hifter and his political allies to Moscow.

Already it appears this extra support is having some impact. The LNA is making significant gains against jihadi fighters in Benghazi, with several high-profile figures captured by the LNA last week. Security has been ramped up at the oil crescent ports, which Hifter has held since September, and the Ras Lanuf facility is being used to launch airstrikes around Sebha. Indeed, it appears Hifter is applying the same strategy for control in southwest Libya as he did in the oil crescent: winning the support of local tribes in the area to remove the social support for his rivals. And it is gaining some traction: On Jan. 5, a group of tribal elders, civil society activists and militias from different southern tribes issued a statement in support of the LNA and demanded that Misrata’s Third Force leave the area.

However, it is important to note that the LNA is not militarily strong in this area, and Misrata has its own support among other local tribes. Likewise, although the LNA has some units stationed just south of Zawiyya to the west of Tripoli, most of the normally fractious political factions and militias in western Libya stand against Hifter and would almost certainly respond by uniting to oppose any LNA incursions in the area. Nevertheless, if Hifter’s forces are able to access Russian equipment and weapons, and if the LNA seizes air bases in southwestern Libya from Misrata, then the risk of the LNA launching an aerial and ground offensive against western Libya, in particular the oil port of Zawiyya, cannot be ignored. One hopes that signals from the West, and the United States in particular, are deterring such potential foolhardiness.

It is this threat that could lead Misratan forces to mobilize en masse in southwestern Libya to cut off the LNA’s advance and prevent it from taking air bases that would allow it to attack Misrata or its allies in western Libya. After the Misratan-led, GNA-aligned al-Bunyan al-Marsus coalition defeated the Islamic State in Sirte in early December, divisions have been growing within Misratan ranks between hard-line Islamist factions who want to take the fight to Hifter and pro-GNA moderates who want to continue the fight against other Libyan jihadi groups, many of whom are providing support to their besieged Misratan comrades in Benghazi. These divisions had threatened to destabilize and weaken Misrata, with tensions spilling over into Tripoli, yet the LNA’s advance over the past two weeks appears to have reunified the city against Hifter, at least for now.

On Jan. 3, an LNA airstrike against Jufra air base killed one civilian and injured the head of Misrata’s Military Council. The following day, Misrata’s Municipal Council, which represents the more moderate faction within Misrata, issued a statement denouncing Hifter as a war criminal, holding him responsible for destabilizing southern Libya and calling on all fighters to be ready to mobilize against any possible offensive by the LNA. It remains unclear whether such a mobilization will take place, but if it does, and if it happens soon, then the balance of power is likely to be in Misrata’s favor as Hifter’s action would bring most of western Libya rallying to its side. Moreover, the Misratan fighters are battle-hardened from months fighting IS in Sirte and have more to lose if Hifter succeeds in taking territory on their doorstep, while the LNA would struggle to mobilize more forces from eastern Libya without risking the gains it has made against jihadis in Benghazi or against the Federalists in the oil crescent.

No matter which party is victorious in southwest Libya, if Misrata and Hifter begin a full-scale battle for control, then there is little doubt that the whole southern region will be destabilized. There have been calls for calm from a variety of local and international actors, and there is some hope that the rapprochement efforts that have been going on in the background between rival factions may provide channels of communication to de-escalate the conflict. However, the terms of any new political bargain are likely to be far more favorable to Hifter and the eastern faction than those of the existing Libyan Political Agreement.

The GNA and its Presidential Council are weak and becoming increasingly fragmented and irrelevant, as highlighted by the resignation of council member Musa al-Koni on Jan. 2. Egypt, Algeria and Russia have been hosting various meetings and negotiations between different Libyan parties to try to find a diplomatic solution to the political impasse that would include Hifter, with Egypt in particular pushing for the Libyan Political Agreement to be reworked to include Hifter as the head of the Libyan Armed Forces (a role the Presidential Council currently holds) and to reduce the size of the council. The United States has yet to respond and risks being outmaneuvered by rival powers. Now is the time for increased US engagement. The Donald Trump administration will come into office with a unique opportunity to mediate a genuine settlement. Its first step should be the appointment of a special presidential envoy tasked with mediating a resolution between Libya’s main power blocs.

It is not yet clear whether Russia’s predicted global ascendancy will materialize, whether a new grand political bargain for Libya can be negotiated or even whether Hifter would halt his military ambitions to accept the terms of any new peace deal, no matter how favorable to him. However, it is certain that how external forces choose to engage with Libya over the coming months will decide the country’s political landscape for years to come.