The Hifter effect on the battle for Libya's Sirte

The expected liberation of Sirte in the near future is overshadowed by Khalifa Hifter, the commander of the Libyan National Army, steadily gaining power and territory through the militarization of the governance of much of eastern Libya. 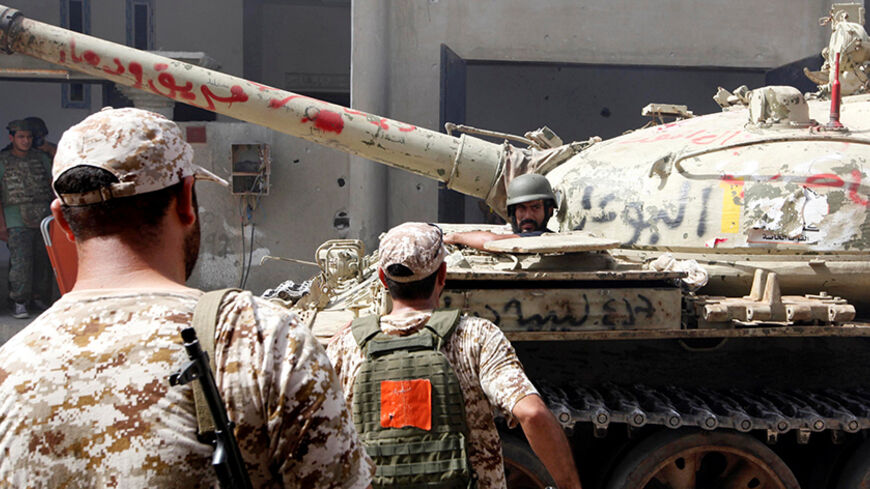 A fighter from Libyan forces allied with the United Nations-backed government sits in an armored vehicle during a battle with Islamic State militants, Sirte, Libya, Oct. 8, 2016. - REUTERS/Ismail Zitouny

For months now, the ouster of Islamic State (IS) forces from Libya’s coastal city of Sirte has been touted as imminent, yet like the light at the end of the tunnel that is within sight but out of grasp, complete victory against IS continues to evade the Misratan-led, Bunyan al-Marsus (BM) forces, and their US allies.

There is still little doubt that a victory of some sort will be eventually won. In fact, before President Barack Obama leaves office, the United States may be able to claim that its aerial and training support have proved instrumental in ousting IS from Sirte. However, without a unified political solution in place through which Sirte’s battered infrastructure, public services and civilian way of life can be restored post-IS, any such victory may turn out to be very superficial. IS emerged in Sirte out of a Misratan occupation following the defeat of an al-Qaeda-linked jihadi group, Ansar al-Sharia, in 2013. The post-conflict stabilization was botched and both civilians in Sirte and Ansar al-Sharia fighters chafed under the Misratan yoke, the latter defecting wholesale to IS in 2015.

Is Sirte closer to being liberated?

IS forces are currently entrenched within the third residential area in northeast Sirte, and despite their limited numbers, the remaining IS fighters continue to inflict casualties on their Misratan opponents through sniper fire and explosive devices. On Oct. 7, BM forces, who are nominally aligned with the UN-brokered Government of National Accord (GNA), launched a fresh assault, which culminated in splitting the enclave. A BM media official, Ali al-Mabrouk, said, "The forces of Bunyan al-Marsus made some advances and completely [cut off] the 600-block area in Sirte." Nevertheless, at least 8 BM fighters were killed in this latest advance, while IS fighters still appear able to conduct attacks outside of their stronghold; on Oct. 2, a Dutch photojournalist was killed by sniper fire in an area of Sirte already supposedly "liberated" from IS forces. Furthermore, reports of fighting between BM forces and jihadis south of Sirte in recent weeks seems to confirm fears that IS fighters have been able to seep out of Sirte, and may therefore be able to regroup or assimilate into other jihadi groups elsewhere.

Have US airstrikes really helped?

The United States has conducted 210 sorties since Aug. 1, when it launched Operation Odyssey Lightning — its campaign of airstrikes in support of BM forces fighting IS in Sirte — and has twice exceeded its planned time frame with operations now entering their third month. The low levels of ordinance dropped and the need for such extensions speak volumes about the ineffective military phasing of this operation. Airstrikes should have been used to soften up IS positions long before BM fighters had begun the urban warfare that has turned IS into a guerrilla enemy. This approach was not adopted because the GNA only requested US assistance after its own forces got bogged down. It should come as no surprise then that the Misratan Military Council — which is coordinating military efforts on the ground in Sirte — has indicated its discontent with the US air support, calling it ineffective.

Due to this incorrect phasing, airstrikes may not have lowered allied casualties or accelerated the battle’s time frame. Since the assault on IS in Sirte began in May, Misrata has suffered heavy losses for a city of only 500,000 inhabitants — at least 560 BM fighters have been killed and 2,750 injured. Rifts and tensions within Misrata have magnified and Misrata’s role as Libya’s most powerful city-state has diminished.

While the Sirte campaign has dragged on in the east, Khalifa Hifter, the commander of the so-called Libyan National Army (LNA), has steadily been amassing power and territory through his militarization of the governance of much of eastern Libya, which now extends to within 50 kilometers (31 miles) of Sirte. On Sept. 11, he seized the oil crescent ports from the federalists, allowing the resumption of much-needed crude exports, and firmly tipping the country’s balance of power in his direction.

Hifter’s actual victory in the oil crescent has pre-empted and overshadowed Misrata’s anticipated victory in Sirte, shifting power away from the GNA and western Libya, toward Hifter in the east. Oil production has reached 554,000 barrels per day and its continued flow is essential to stymie OPEC attempts to cut production and raise prices. These new realities on the ground mean that Hifter now has greater leverage within the international community as well as with many towns, tribes and militias on the ground. It is too early to say what impact this will have in the ongoing fight against jihadism in Libya.

On the one hand, given that there is no longer a third force separating the LNA and Misratan forces — a role the federalists and IS had previously occupied — and that both Misrata and the LNA are fighting IS and other jihadi groups, albeit in different locations, this could theoretically strengthen the logic of partition and tacit compromise between eastern and western Libya in the event of the collapse of the UN-mediated peace process. Indeed, there are likely to be many battle-weary Misratan fighters who are willing to tacitly accept Hifter’s gains so long as the LNA does not advance further west or tries to keep oil revenues for themselves. That said, although Hifter's influence is strong in eastern Libya, he is struggling to exert his control over his allies elsewhere, with LNA units in both southern and western Libya rebelling against his rule in recent days. Although a rebellion by ex-Moammar Gadhafi regime commanders in Sebha was quashed last week, this shows that Hifter does not yet have the power or influence to take the rest of Libya by force.

On the other hand, anti-Hifter sentiment remains sky high and is already fueling a backlash that could stimulate further jihadi recruitment. Islamist hard-liners from across Libya appear to be rallying their forces to Tripoli, fearful that current negotiations with Hifter will lead to him being given a security role within the UN-mediated political process. Kidnappings and assassinations between pro-GNA and Islamist militias in Tripoli have been on the rise in recent weeks, and if a new "grand bargain" is struck that reflects Hifter’s power on the ground, it is highly likely that these anti-Hifter hard-line Islamists will respond with violence, possibly spawning a newly rebranded jihadi network.