Can Libya find unity through oil?

With the Libyan National Army’s takeover of the crescent oil ports, Gen. Khalifa Hifter may be the key to a true national unity government. 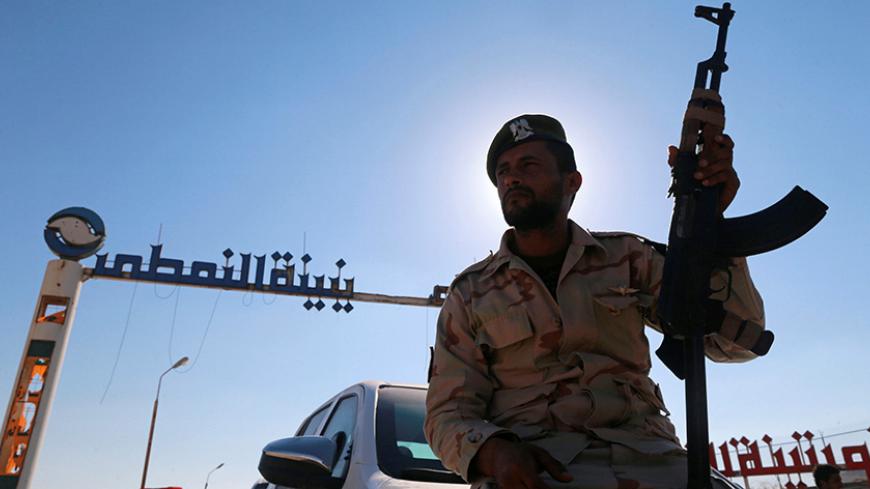 A member of the Libyan forces loyal to eastern commander Khalifa Hifter sits on a car in front of the gate to the Zueitina oil terminal in Zueitina, west of Benghazi, Libya, Sept. 14, 2016. - REUTERS/Esam Omran Al-Fetori

For years, Western policymakers have sought to sweep the post-Moammar Gadhafi mess under the rug. Although they are not primarily responsible for the country’s post-Arab Spring implosion — as the recent report by conservative member of UK Parliament Crispin Blunt erroneously implies — Western leaders have chosen to keep Libya at arm’s length by delegating to the United Nations the dirty job of sorting out the warring factions.

The UN aim to forge a unity government through negotiation has always been a noble goal, but its approach has often been half-baked and tainted by UN corruption. When the Government of National Accord (GNA) formally came into being in March 2016, it was not representative of Libya’s key factions. Instead it was dominated by stakeholders from Misrata and Tripoli, with a sprinkling of Islamists. This compounded fears of political exclusion among Easterners and led to greater support for the anti-Islamist Gen. Khalifa Hifter, who has long sought to upend the UN-backed political framework and establish military rule.

After months of a stalemate, Hifter may have finally found the appropriate means to put a nail in the GNA’s coffin. On Sept. 11, he wrested the oil crescent away from his federalist opponents in a military offensive, dubbed Operation Sudden Lightning. The Libyan National Army’s (LNA) largely bloodless takeover of the oil crescent ports led to the National Oil Corporation’s (NOC) immediate resumption of exports of stored crude oil. Although these shipments were halted by a federalist and Islamist counterattack on Sidra and Ras Lanuf ports Sept. 18, the LNA swiftly repelled the attack. It is possible to imagine the swift export of all the remaining storage of crude oil. Due to these victories, the power balance has completely shifted in the LNA's favor, further undermining the GNA and their federalist and Islamist allies. Just days after the first tentative exports, the black market value of the Libyan dinar had jumped 20%, signaling the Libyan street’s positive reception of recent developments.

The most powerful decision-maker in the oil sector, NOC Chairman Mustafa Sanallah, is not only based in Tripoli, he is nominally the employee of Hifter’s enemies — previously the General National Congress (GNC), and now the GNA. It is superficially surprising, then, that he now appears to support the LNA’s takeover of the oil crescent ports and on Sept. 19 called for the long-standing blockades of the pipelines connecting the southwest oil fields to the coast to be lifted. This is because Sanallah wants to decimate all forms of blackmail and extortion in one fell swoop.

Hifter’s ouster of federalist leader Ibrahim Jadhran might provide just the momentum Sanallah needs. Jadhran had long occupied the oil ports and prevented Sanallah from increasing much-needed crude production throughout 2016 by demanding bribes before he would let Libya’s oil flow.

More surprising than Sanallah’s support is that of both the international community and the unity government’s Presidential Council (PC), which, after initially condemning the stealthy takeover, appears to have acquiesced to LNA control. The only condition they have issued for their support is that oil exports resume under the banner of the NOC, and not illicitly.

Herein lies one answer to the riddle of why the international community and the UN-mediated PC, which it supports, would now agree to support Hifter over the federalists, despite having initially supported the federalists against Hifter: oil.

Libya’s economy is in dire straits, and the cash from oil exports is needed to support the foundations of a coherent Libyan government. Hence, it now appears that all the mainstream players are willing to accommodate whatever solution can get crude flowing — putting funds into Libya’s balance sheet.

On the one hand, this is quite an about-face. Over the last months, the West has largely opposed Hifter, driving him further into the embrace of Egyptian President Abdel Fattah al-Sisi and Russian President Vladimir Putin. On the other hand, it appears that a covert meeting was held in Tunis, Tunisia, on Sept. 8 where Western powers and Hifter’s envoys discussed the importance of safeguarding the oil ports. It is possible that an understanding was reached vis-a-vis Hifter’s securing the oil ports against both the Islamic State and Jadhran. Or, more probably, no concrete understanding was reached, but both sides understood a shared interest — and each began to act accordingly.

The emergence of this tacit understanding would have been the final boomerang from the West’s failed engagement with Jadhran. Early this summer, UN special envoy to Libya Martin Kobler tried to buy Jadhran’s support to resume oil exports via his July 21 proposal. This proposal sparked the ire of many, both in Libya and abroad. The backlash from Kobler’s failed gambit now appears to be a complete reshuffling of the political deck, with Jadhran becoming irrevocably excluded from the negotiating table. Kobler now has his tail between his legs. His meeting a few days ago with the hard-line, anti-GNA House of Representatives President Ageelah Saleh in Cairo in an attempt to find a new compromise agreement on how to salvage the Libyan Political Agreement highlights his belated shift of policy.

Another potential explanation for this U-turn is the shifting tide of Libyan public opinion toward Hifter and the LNA.

The PC and international backers of the GNA were quick to issue a statement Sept. 12 demanding the LNA’s unconditional withdrawal from the oil crescent ports. The following day, Kobler tried to convince the UN Security Council to issue a new resolution with punitive measures against Hifter. However, he was unsuccessful.

This negative reaction provoked an angry backlash throughout Libya, with some Libyans seeing this condemnation as interference in Libyan affairs. Angry demonstrations were held in many cities across the country Sept. 16 in support of the LNA. Zintani and Warshefanan militias also threatened to cut the Western pipelines, which take gas to Italy via Mellitah and the Greenstream, if the LNA were attacked.

Fayez Serraj, prime minister of the UN-backed Presidential Council, was the first to change his tune, stating Sept. 13 that he would not declare war on another Libyan faction, nor seek foreign intervention. This sentiment was repeated by local officials and city representatives from Misrata, who told Kobler that Misratan forces would not go to war to support Jadhran against the LNA. By Sept. 16, the tone of most international actors had shifted; they welcomed the speedy resumption of exports of stored crude, the handover of oil ports to the NOC and the encouraging of a new round of dialogue. Bizarrely, the traditionally pro-Hifter French have been making the biggest fuss.

Libya’s current political alliances are not only in flux — they are nontransitive. Enemies quite frequently work together on shared objectives, and two allies could have opposite relationships with a third party. Alliances can shift and change within the blink of an eye, with sworn enemies joining forces to confront a threat.

In response to this enduring fluidity, the UN-backed political process cannot stick to fixed ideas and needs to bend like a reed in the wind or risk being snapped like a twig in a vice. Working to bring Hifter’s supporters inside the political dialogue is the right approach. With any luck, it could even culminate in a unity government worthy of the name.