With IS expelled from Libya's Sirte, what comes next?

Libya's GNA-backed Misrata fighters disposed of IS in Sirte, staking its claim as a politically dominant force in the fractured country. 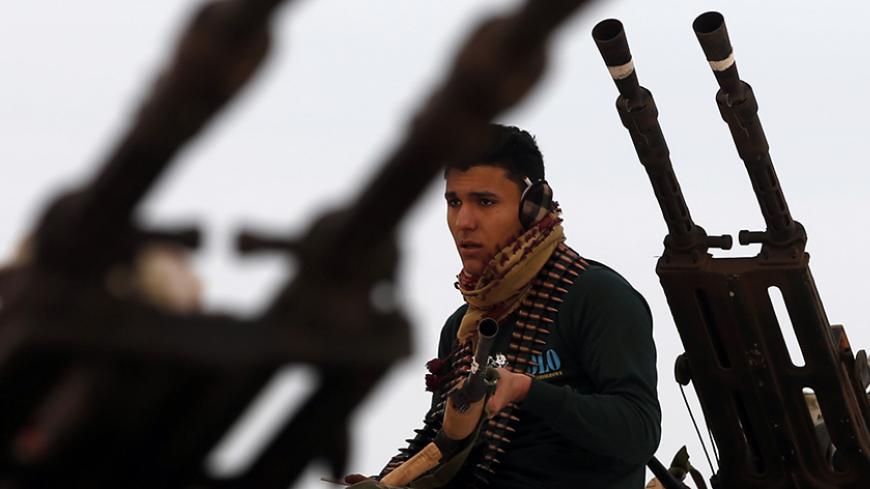 A fighter from Misrata sits on top of a vehicle near Sirte, Libya, March 16, 2015. - REUTERS/Goran Tomasevic

Last week, the Islamic State (IS) was finally dispossessed of its most important piece of real estate outside of the Levant: Libya’s Sirte. After months of slow progress, Misratan fighters aligned with the UN-backed Government of National Accord (GNA) finally advanced the last few hundred yards into Sirte's Al-Giza Al-Bahriya district, clearing the remaining buildings of booby-traps, IEDs and suicide bombers.

Now that IS has been territorially defeated, the question of greatest significance for Libya’s trajectory is not the one the intelligence agencies are focused on, which is what the remnants of IS will do next. Rather, it is the question diplomats and analysts have long been pondering: What will the victorious Misratan fighters do next? Potential IS terror attacks may cause panic, but the actions of the fighters from the northwestern city of Misrata have the capacity to unify or conversely destabilize the whole country. The Misratans took down IS not out of a particular hate of jihadis, but out of a desire to obtain further Western support and become Libya’s dominant political force. The gambit may have backfired. Will we now see a hot civil war between Misrata and Field Marshal Gen. Khalifa Hifter, who dominates in Libya’s east? Or with the removal of a common enemy, will the component parts of Banyan Marsus (BM) break apart, allowing Misrata’s enemies to become the dominant military force in Libya?

Some BM forces, especially those with strong links to the GNA, have become convinced throughout the process of fighting in Sirte that IS is intimately linked with other Libyan jihadis, such as the Benghazi Revolutionary Shura Council (BRSC) and the Benghazi Defense Brigades (BDB). This attitude is especially strong among the anti-jihadi Madkhali Salafists, who now appear to be turning on their erstwhile Islamist-affiliated allies in Misrata.

BM forces on Dec. 9 stormed a camp in the Temmina area of Misrata after units from the BDB, which attacked the oil crescent Dec. 7, retreated there. The Misrata Municipal Council has also issued an order to prevent ships sailing from Misrata with relief supplies for Benghazi, indicating that Misrata’s official organs are beginning to crack down on their citizens and militiamen supporting non-IS jihadis. This is likely to put them in direct conflict with the “hard-liners,” who since 2014 have been supporting all stripes of Islamists in eastern Libya against Hifter and his Libyan National Army (LNA).

A number of these hard-liner, anti-GNA Misratan forces have entered Tripoli over the past week to provide support to the allies of former General National Congress (GNC) Prime Minister Khalifa al-Ghwell, who led an anti-GNA coup attempt in the capital in October. This should come as no surprise, as in 2015 certain Misratan hard-liners helped the BRSC fight against Hifter, while many BDB members are Misratan renegades who rejected the command of BM.

Although the LNA has not participated in the fight against Sirte, it has reaped many of the gains. In September, Hifter took control of the oil crescent ports. Since then, oil exports have increased and the LNA has fortified its positions in the oil crescent — although, there have been rumors over the past few weeks of a counterattack being planned from Jufra, southwest of the oil crescent, by a motley crew of federalists, Islamists and some anti-Hifter GNA forces. Few expected such an attack to succeed due to these fighters’ lack of local support and limited military capacity. So when a convoy of these disparate forces moved on Bin Jawwad in the wake of IS’ defeat in Sirte, it was not surprising that the LNA quickly drove back the assault, killing or capturing over 100 fighters. As a result of this botched raid, Hifter has further consolidated his control of territory all the way down to Brak al-Shati in southwest Libya, where on Dec. 10 an LNA brigade retook Brak Air Base after Misrata’s third force retreated.

Taken together, these developments indicate that a new renegotiation of power on the ground is already taking place between Hifter and Misrata, suggesting that only the most hard-line Misratans would be foolish enough to attempt to push back Hifter’s advance militarily.

This is not to say peaceful collaboration is around the corner. Reports indicate that BM command has opted to appoint a military governor to rule the city in protest at the election of a pro-Hifter individual as mayor of Sirte on Dec. 12.

The situation on the ground would now suggest that the Misratans’ victory against IS has been pyrrhic. They suffered extensive casualties and have had their internal unity fracture, while Hifter has grown in popularity due to his advances in Benghazi and in the oil crescent. This trend looks set to continue as pro-LNA elements in western Libya have just lifted the longstanding blockade on the Ryayna valve, which could let an additional 350,000 barrels per day flow to the Zawiya oil port.

Throughout much of Libya’s early 20th-century history, the western portion of the country was fragmented into city-statelets, while the east was fairly unified. As such, the Sanussiyya were able to lead a unified resistance to Italian occupation in eastern Libya, while the various chieftains of western Libya feuded among themselves — diminishing their capacity to confront the colonizer.

A similar pattern appears to be repeating itself today. Eastern Libya still possesses a strong Arab tribal structure that Hifter has been able to use to his advantage. By contrast, western Libya has fissures between Amazigh and Arabs, and the inhabitants of its main city — Tripoli — are fragmented based on their place of origin and neighborhood. Indeed, since 2011 Misrata has reassumed its political position from the Italian period as the one coherent political force in western Libya. If the city’s internal fissures cannot be mended, the result could be the destabilization of the whole western region.

The developments of the past week have not only demonstrated the unifying power of common enemies in Libya, but more importantly how quickly these "anti" alliances can shift once the common enemy disappears. A mutual hatred of Hifter brought together factions that until recently were fighting one another, while now that IS is territorially defeated, the Misratan BM forces appear to be fragmenting into a series of smaller "anti" factions. Some are joining the anti-GNA Islamist forces in Tripoli, while others are focusing on anti-jihadi operations closer to home. Some would no doubt be eager to join an anti-Hifter coalition if further defeat did not seem so assured. Others are anti-conflict, opting to support a political solution after suffering months of fighting, injury and death.

These internal Misratan divisions have been simmering for some time, and although they have been brought to the surface by recent events, this does not mean that Misrata is on the verge of civil war. Misrata, perhaps more than any other post-Qaddafi power center, has succeeded in overcoming internal strife in order to put its interests first. However, with Libya’s fluid alliances changing faster than ever, and the GNA possibly entering its dying days, what Misrata does next is likely to shape Libya’s trajectory over the coming weeks.

The world cannot afford a collapse of Misratan power and stability. Therefore, Western policymakers should not leave Misrata out to dry. America in particular must not let the Misratans go unrewarded for fighting and dying against IS. President-elect Donald Trump’s transition team should understand this all too well. Furthermore, for Libyans to be able to settle their differences and achieve a lasting political compromise, a genuine balance of power and mutually acceptable stalemate must first be reached. Only then should a new political process be initiated — ideally, one that includes both Hifter and the Misratans.