Rather than uniting Libya's feuding national oil companies and myriad rival militias, the United Nation’s clumsy attempts to restart oil exports have pushed them all into pitched battle. 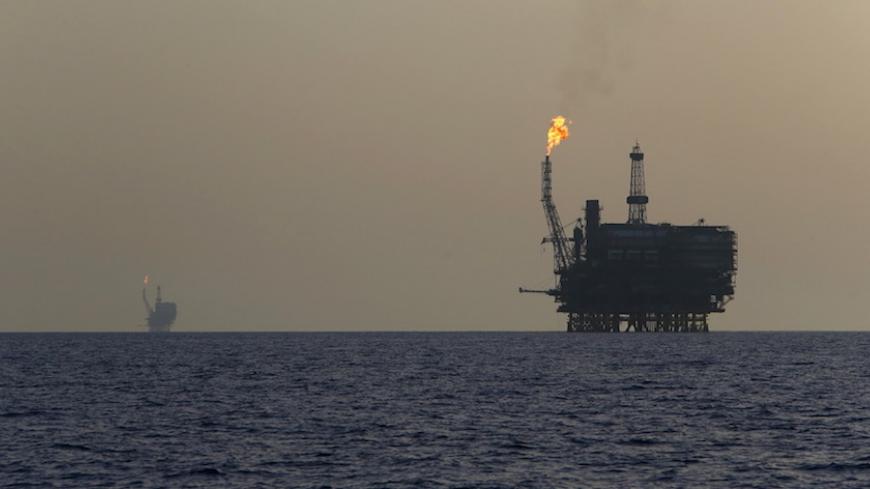 Offshore oil platforms are seen at the Bouri Oil Field off the coast of Libya, August 3, 2015. - REUTERS/Darrin Zammit Lupi

Libya's current dysfunction is more Orwellian than most realize. The so-called unity government, aka the Government of National Accord (GNA), is not actually a union of the country’s main militias. Nor does it geographically represent the country by combining power centers. It draws almost exclusively on Misratan and Tripolitanian powerbrokers.

The supposed July 2 "merger" of the eastern and western rival National Oil Companies (NOC) is a similar exercise in linguistic creativity. The eastern Tobruk government and the western Tripoli-based GNA are still pursuing different oil policies and maintain separate NOCs. Simultaneously, each is trying to prevent the other from benefiting from the country's oil wealth. In retrospect, it appears the merger announcement three weeks ago was likely fabricated to allay Western demands for progress in the oil sphere.

Over the past week, the international community and the United Nations has been caught doubling down on its "oil first" strategy. Rather than seeking to secure genuine political compromises or incentivize coordinated fighting against the Islamic State (IS), the UN appears to have prioritized bribing key militias to allow oil to flow through infrastructure that they control. This would not be the first time the UN special envoy to Libya was involved in bribes. Unsurprisingly, it is already backfiring.

It has long been appreciated that it is not IS’ control of the coastline, but rather the rivalries between the federalists — rogue Gen. Khalifa Hifter's Libyan National Army (LNA) — and the Islamist-aligned militias of Misrata that are preventing a resurgence of Libyan hydrocarbon exports. The federalists have long occupied the key terminals Ras Lanuf and Sidra, which are located in the oil crescent region that stretches from Bin Jawwad, east of Sirte, to Marsa Brega, southwest of Benghazi.

Knowing that possession is nine-tenths of the law, they shut off the spigot of Libya’s key oil terminals in 2013-14, when prices were still reasonably high, bringing the then-government in Tripoli to its knees. By their own admission, their "strike" cost Libya approximately $100 billion in revenue. Federalist leader Ibrahim Jadhran apologized for the previous damages he had caused his countrymen, while still asserting that if he is not included in any future power-sharing deal, he can and will prevent oil terminals from coming back online.

As such, his Petroleum Facilities Guard was the key eastern militia included in the UN-brokered GNA. Despite becoming legitimated as a political actor, the oil did not flow, as Jadhran simply lacks the ability to deliver increased production. In fact, his actual power in the oil crescent has waned over the past months just as Hifter’s has waxed. Furthermore, the main oil terminals are irreparably damaged due to disuse and repeated IS attacks.

In this regard, Riccardo Fabiani of Eurasia Group told Al-Monitor, “The extent of the infrastructural damage at Ras Lanuf and Sidra is unclear. Both ports’ nameplate capacity is about 600,000 barrels per day, which means that even if they were to operate at 30% capacity they would still add a substantial 200,000 bpd.” Fabiani's statement represents an accurate technical rather than a political reading of Libya’s exporting difficulties. Jadhran continues to promise that if paid he can reopen the terminals. His rhetoric projects his indispensability, hence, increasing his bargaining power. In reality, he may only be able to export oil already stored in tanker farms, especially in Zuetina.

Not fully grasping the nested technical, political and game theory dynamics, UN envoy Martin Kobler visited Jadhran July 21 in an attempt to pry open the oil crescent ports, which promptly backfired unleashing a scramble for control of the oil ports on behalf of the Islamist-aligned Benghazi Defense Brigades (BDB) and the wing of the LNA supported by French special operations. After the BDB was repulsed from the oil crescent July 23, the internationally recognized NOC chairman Mustafa Sanallah published a scathing letter. Referencing the violence Kobler had unwittingly unleashed, Sanallah wrote that he was dismayed at Kobler’s “providing recognition” to Jadhran as “it sets a terrible precedent and will encourage everybody who can muster a militia to shut down a pipeline, an oil field or port to see what they can extort.”

This terrible precedent of appeasement has long prevailed in Libya. In 2013, for instance, the Berber militias sought to block the natural gas pipeline to Italy to gain recognition of their language in the Libyan Constitution, and every few months various groups have shut down oil facilities and ports demanding that they receive their unpaid salaries. Libya’s political actors are unashamedly zero-sum thinkers.

All these boycotting groups would be better served if Libya’s oil flowed and the wealth was reasonably fairly distributed. And yet, they have long settled for a classic case of prisoner’s dilemma. Jadhran does not want the oil to flow if the Tripoli-based NOC, and hence Misratan and Islamist interests, benefit from the cash. Those interests and the UN may be willing to buy Jadhran off to let the oil flow, but doing so will cut other actors out of the game, such as Hifter or the Tebu militias in the south, engendering them to derail things. While Jadhran may have control of the oil ports in Zuetina, Sidra and Ras Lanuf, the LNA and aligned tribes control the oil fields in the Sirte and Sarir basins, meaning that steady oil exports are unlikely to resume in the short term.

On July 26, LNA’s Chief of Staff Abdelrazak Nazhuri warned that any foreign oil tankers approaching the Libyan coast would be targeted by the air force. Nazhuri, who was recently appointed military ruler in the east by Ageelah Saleh, the president of the House of Representatives (HoR), said that only oil tankers that had been sanctioned by the eastern NOC (i.e., the one recognized by the HoR) would be allowed to enter Libyan waters. So much for the supposed NOC merger. The warning comes after both rival administrations of the NOC in Tripoli and Benghazi separately condemned the UN envoy’s meeting with Jadhran. The threat of a blockade actually returns Libya to an earlier set of political configurations. Jadhran, who had recently become a key ally of the GNA and the international community, is once again an outlaw trying to smuggle illicit oil abroad.

In spring 2014, he chartered the North Korean-flagged tanker Morning Glory, which after reaching the high seas was apprehended by US special forces. That the vessel was able to leave Libyan waters was proof enough of the incompetence of Prime Minister Ali Zeidan. Days after the vessel was apprehended he lost a vote of no confidence. This was the first step that led to the polarizing HoR election followed by the split of the country into two rival governments.

If history is any indicator, should Jadhran yet again attempt to smuggle oil it would likely be enough to cause the complete collapse of the UN-brokered “unity process.”