As Libya's oil exports, and funding for oil operations, look set to rise, the struggle for political control is shifting to Libya’s financial institutions. 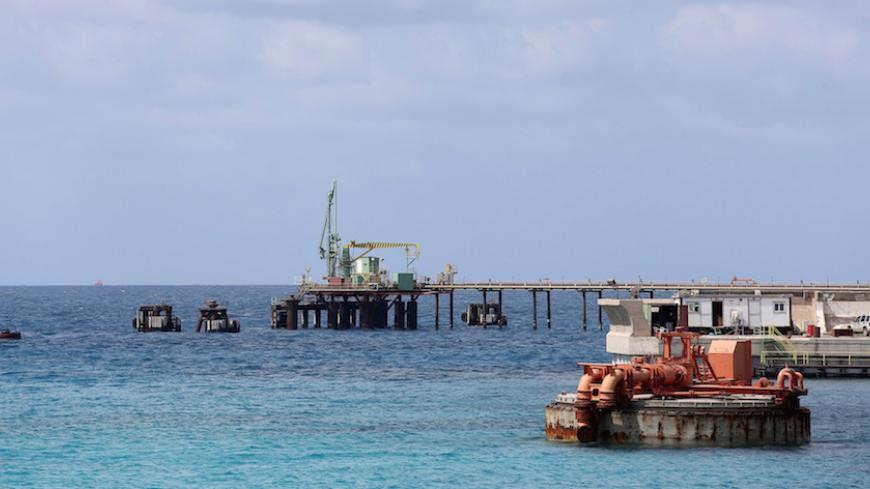 For nine months, the United Nations has attempted to force the so-called General National Accord (GNA) government on Libya. Despite myriad international pronouncements of support, the GNA has failed spectacularly to take hold on the ground. Regional squabbles, constitutional complexities affecting its legitimacy and its lack of institutional capacity impede the GNA's progress. Lurking behind all these proximal causes are its lack of revenue. It has never controlled Libya's key nodes of oil production and exports.

On Sept. 11, forces aligned with Gen. Khalifa Hifter, the GNA's most prominent rival, seized control of most of Libya's oil crescent ports — evicting the remaining pockets of Ibrahim Jadhran's federalists. In the wake of this momentous action, the two-year hiatus on international oil exports from Ras Lanuf, Sidra and Zueitina was speedily brought to an end. Since then, tankers have been loaded (mostly with crude that has been in deep storage in tanker farms) and funds for repairing oil facilities have been allocated. Soon, revenue from these oil shipments will flow back into Libya's coffers. To whom in Libya's complex, fractured institutional landscape will these funds go, and why are they being allowed to flow?

On Sept. 21, the same day that the first shipment of crude oil since 2014 left Ras Lanuf for Italy, the National Oil Corporation announced it had received a payment of 310 million Libyan dinars ($224 million) from the UN-backed Presidential Council — which functions as the GNA's executive body — to carry out repairs and maintenance at the oil facilities, and would receive another 620 million dinars paid in two equal amounts by the end of the year. The following day, 22 countries and international bodies — including key players such as Egypt, the United Arab Emirates (UAE), Qatar and Russia — issued a joint communique on Libya, reiterating commitment to the Libyan Political Agreement signed in Skhirat, Morocco, last year, as well as welcoming the nominal transfer of control of ports in the oil crescent to the National Oil Corporation and the resumption of exports.

On the face of it, after months of mishaps and accidents, lack of National Oil Corporation funding and diminished oil revenues, the reopening of these ports should be a cause for national celebration, especially given the dire economic straits Libya is in.

It is important to remember, however, that the architect of this revival is Hifter; the same man who has consistently opposed the GNA and the UN peace process, who refuses to recognize the authority of the Presidential Council and has made no secret of his admiration for military leaders, such as Egypt's President Abdel-Fattah al-Sisi. Yet the revenues from the oil exports he is allowing to flow are supposedly all channeled through the Tripoli-based Central Bank of Libya, which is under the control of the UN-backed Presidential Council. So why does Hifter allow this to happen when the funds will bolster the very political entity he wants to remove?

First, by seizing the oil crescent ports and reopening them, Hifter has earned a great deal of political legitimacy among Libyans, from both east and west, who were not previously supporting him. Hifter's move was brilliantly timed because his opponents from Misrata recently made progress against the Islamic State (IS) in Sirte and severely decreased the threat of terror attacks on port infrastructure. By letting the oil flow, Hifter can claim he is rising above politics and is acting in the best interests of the Libyan people, something the international community would be hard pressed to challenge given he has seemingly handed the ports over to the National Oil Corporation.

Likewise, if Hifter were to overtly seek to gain control over the Central Bank of Libya — whether by redirecting oil revenues or taking kickbacks from Libyan coffers — he would weaken his leadership credentials. On Sept. 21, the High Council of State, a consultative body enshrined by the Libyan Political Agreement, announced that it was "compelled" to take over full legislative powers from the House of Representatives as it had supported Hifter's coup, and also planned to appoint a new Central Bank of Libya chairman. The High Council of State's move was widely rejected as out of touch with reality — the Central Bank of Libya chairman, Sadiq al-Kabir, is seen as pro-Tripoli and not a fan of Hifter. That Hifter's opponents are failing to gain traction indicates that Libyans are increasingly valuing unity and power over division and tit-for-tat politics.

Second, Hifter now controls the Presidential Council's access to desperately needed oil revenues and can therefore use this as a bargaining tool to get what he wants. In fact, he could even seek to employ similar tactics as Jadhran — by blackmailing the Presidential Council by turning the spigot off. Libya's crude output has risen to 450,000 barrels per day already, up from 260,000 barrels a day last month. However, these numbers are deceptive because most of the increase is based on the finite amount of stored crude being finally exported. Nonetheless, some fields will be coming back online and production does seem to be able to be gradually ramped up.

Acknowledging the tremendous importance of these developments for any future GNA success, on Sept. 27, Prime Minister Fayez Serraj said Hifter or his close allies would be represented in the new government currently being drawn up by the Presidential Council. But this is unlikely to make Libya's powerful general suddenly subscribe to the process. Hifter's swift takeover has highlighted how little power the Presidential Council has on the ground; therefore, he would unlikely be satisfied with anything less than a complete reworking of the Libyan Political Agreement with him in a position of power.

Third, it is important to remember that despite the fighting and fragmentation in Libya, the Central Bank of Libya has largely continued to pay salaries to a whole host of opposing militias, including most of Hifter's Libyan National Army forces. Therefore, it is likely that Hifter's short-term funding priorities are focused on arms and ammunition rather than paying salaries, as in terms of arms purchases, access to Central Bank of Libya funds would be of little help in and of itself.

Instead, Hifter is looking to his international allies to access military supplies. In recent interviews, Hifter has acknowledged the intelligence support and advice his Libyan National Army receives from Egypt. And Egypt, in return, has reaffirmed its support for Hifter. Hifter has also been urging Russia, another ally, to help lift the UN arms embargo so that his forces can gain access to more arms and military equipment.

In short, Hifter's ambitions reach far beyond gaining access to specific amounts of Central Bank of Libya funding. He appears to be playing the long game; progressively building up legitimacy, leverage and influence. Since the start of the uprisings against Libyan leader Col. Moammar Gadhafi, Hifter has tried via various tactics and ruses to become Libya's strongman. It is in this light that we must interpret his current military maneuver in the oil crescent and generosity toward the GNA. He clearly hopes to finally acquire a strong enough position to seize the leadership of Libya for himself, whether through political negotiations or more likely through military force.

Fortunately for Libyans who aspire to constitutional governance, Hifter is not there yet, and he has many formidable foes — most notably the Misratan militias, who, conveniently for Hifter, have been battering down IS. Should Hifter make a power grab, the Misratans would fight to the bitter end before allowing such a staunchly anti-Islamist, former regime figure to seize power in Libya.

Nevertheless, Libyans are growing ever wearier of the relentless conflict, chaos and confusion that plague the country; if Hifter can demonstrate that he truly offers a more stable alternative, with the support of powerful allies such as Egypt, the UAE and Russia, it is conceivable that he might eventually achieve his dream — especially if the international political scene undergoes a vast upheaval in November because of the US elections.