Can Turkey double down in Libya game?

Under attack by Khalifa Hifter’s forces, Libya’s UN-recognized government in Tripoli has pinned its hopes on Turkey, but despite its forceful rhetoric of support, Ankara can hardly tip the balance in Tripoli’s favor. 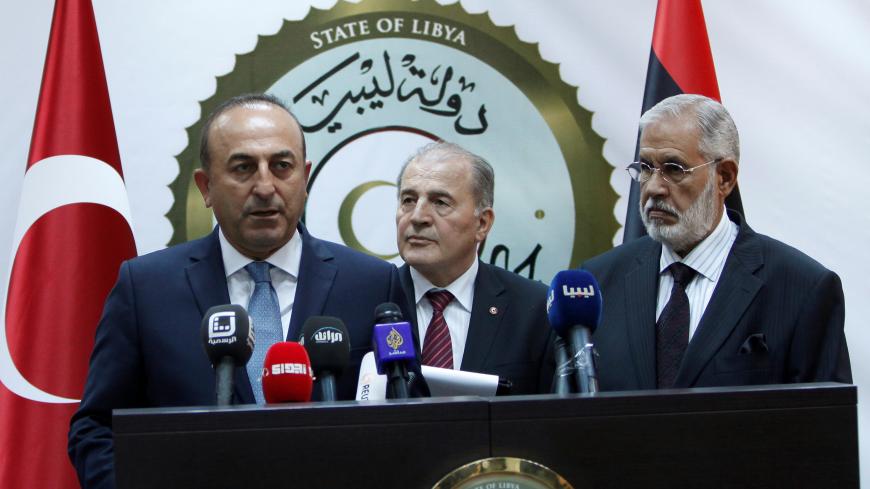 It is hardly an auspicious time for geostrategic adventures for Turkey. The governance mess after the country’s transition to an executive presidency system, a worsening economic downturn and mounting political tensions since the March 31 local polls require Turkey to focus on its domestic woes. Yet, on top of its Syrian stalemate and soon after landing in the losers' club in Sudan, Ankara is cruising into another regional crisis — the one in Libya.

Turkey came back into the spotlight in Libya’s conflict after Libyan National Army (LNA) commander Khalifa Hifter launched an offensive on Tripoli April 4, having taken control of two-thirds of the country, backed by Egypt, Saudi Arabia and the United Arab Emirates. The Tripoli-based Government of National Accord (GNA), led by Fayez al-Sarraj and backed by the Muslim Brotherhood and other Islamist groups, has pinned high hopes on Turkey. Sarraj, who has mounted a counter-operation to defend Tripoli, asked Ankara for support in an April 28 phone call with President Recep Tayyip Erdogan.

Setting the bar rather high, Erdogan pledged to “stand firm by our Libyan brothers” and “mobilize all our means to disappoint those who want to turn Libya into another Syria.” Arguing that dark scenarios were underway against regional peace, Erdogan said that Sarraj’s government “takes its legitimacy from the people,” while dubbing Hifter “a dictator backed by Europe and some Arab countries.”

A day after the Sarraj-Erdogan call, the GNA interior minister visited Ankara to discuss the details of cooperation, including reportedly how to make use of bilateral defense and security deals. On April 19, Erdogan had received also the head of the Tripoli-based, Islamist-dominated High Council of State.

Erdogan may speak of dark scenarios in Libya, but Turkey has been part of those scenarios since 2011. GNA supporters point to a coalition of countries seeking to make Hifter the sole master of Libya, with financial aid coming from Saudi Arabia, arms and drones from the UAE and warplanes from Egypt, in addition to military advisers from France.

US President Donald Trump’s April 15 call to Hifter came as another blow to the Tripoli camp. In a statement that was the clearest yet in support of Hifter, the White House said Trump recognized Hifter’s “significant role in fighting terrorism and securing Libya’s oil resources” and the two discussed “a shared vision for Libya’s transition to a stable, democratic political system.”

Washington’s support is hardly surprising, given Hifter’s background. After falling captive in the war with Chad in the 1980s, Hifter made it to the United States and spent two decades there, reportedly in a close relationship with the CIA. With the Trump-Hifter dialogue, the earlier appeal of Secretary of State Mike Pompeo has all but lost its meaning. “We oppose the military offensive” by Hifter’s forces, Pompeo had said, urging “the immediate halt to these military operations against the Libyan capital.”

Through overt or tacit support for Tripoli, Turkey and Qatar form the rival axis in Libya, with Italy also investing in this camp in line with its future interests.

Turkey’s strongest card is the UN recognition of the GNA, but the accusations that Ankara faces undermine its argument of legitimacy. The Hifter forces and the Tobruk-based government have repeatedly accused Turkey of shipping weapons to Libya.

In January 2013, weapons were found on a ship en route from Turkey to Libya after bad weather forced it to anchor in Greece. In December 2014, Egypt intercepted another ship carrying weapons, and a Korean ship arriving to the Libyan port of Misrata turned out to contain arms loaded from Turkey. In August the same year, Hifter ordered his men to strike a ship coming to Derna from Turkey on the grounds it carried weapons. In September 2015, Greece seized a ship that had taken an ammunition cargo from the Turkish port of Iskenderun.

Turkey has also been accused of shipping weapons via Sudan. In November 2017, a ship that set off from the Turkish port of Mersin was stopped at Port Said, laden with 29 containers of ammunition.

Most recently, on Dec. 18, an arms-laden ship was seized at the port of Khoms, some 100 kilometers east of Tripoli. According to customs officials, the cargo contained 3,000 Turkish-made pistols as well as hunting rifles and explosives. The incident followed the reported discovery of 2.5 million Turkish-made bullets on a ship seized at the same port the day before. During a visit to Tripoli several days later, Turkish Foreign Minister Mevlut Cavusoglu agreed to a joint investigation into the arms shipments, which, he said, “do not represent the policy or approach of the Turkish state.” In a report to the UN Security Council in September, the panel overseeing the arms embargo on Libya had confirmed the shipment of arms to Libya from Turkey and the UAE.

The accusations against Turkey have rekindled since Hifter began his march on Tripoli. In a series of tweets, some of them in Turkish, LNA spokesman Ahmad al-Mesmari has charged that Turkey “continues to provide weapons to terrorists in Libya” and claimed possession of “documents and other evidence” that prove Ankara’s support for the Islamic State (IS), while arguing that Hifter’s forces “are fighting the internationally recognized terrorist group al-Qaeda in Tripoli.” At a press conference April 19, Mesmari also claimed that Turkey had sent al-Nusra militants from Syria to Libya and provided drones to terrorists.

Although the campaign against Turkey is not without basis, simplifying Turkey’s role as support to terrorism is apparently aimed at driving Turkey away and isolating the Tripoli government. The relationships behind the arms shipments remain unclear, but this issue aside, Ankara’s pro-Tripoli policy appears unlikely to tip the balance in Libya.

In talks with US, Russian and European counterparts in recent weeks, Turkish officials have sought support for a return to the road map of Ghassan Salame, the UN special envoy to Libya, which has been effectively shelved amid Hifter’s thrust on Tripoli. Yet nothing concrete has come out of those efforts, with the UN recognition of the GNA losing importance in the face of the new developments on the ground. As a result, the majority of actors in the European Union, the Arab League and the UN Security Council have come to bet on Hifter’s success.

At the Arab League, a tendency has reportedly emerged to recognize Hifter as the new legitimate leader if he takes Tripoli. The Security Council has urged an end to hostilities in Libya, but stands no chance of passing a resolution that would beset Hifter. By spurning Britain’s draft resolution April 19, the United States and Russia demonstrated they are on Hifter’s side.

As a neighbor of Libya, Egypt feels entitled to intervene due to the ramifications of instability on its borders. The Trump administration’s approach to the region has come to overlap with the policies of the Saudi-Emirati pair. It also appears to please Egypt as well, as evidenced by Washington’s push to designate the Muslim Brotherhood a terrorist group, hot on the heels of a visit by the Egyptian leader.

France, meanwhile, blocked an EU statement April 11 that would have held Hifter responsible for the clashes. Qatar, Turkey’s partner in Libya, has seen its role and influence weaken to a large extent, while Sudan, Turkey’s “invisible” cohort in Libya, is out of the game after Omar al-Bashir’s ouster last month.

With all those factors at play, it's hard to expect a successful outcome for Turkey in Libya. The forces Turkey supports have managed to hold on to Tripoli and Misrata, but a scenario in which they manage to push Hifter back to Tobruk and Benghazi appears too weak now. Hifter has long struck deals with the tribes in the oil-rich southern and eastern regions and lured Libyan soldiers to his side after the regular army disintegrated in 2011. If Hifter’s forces prevail, the cost of taking sides for Turkey could mean forgetting about Libya altogether, much to the chagrin of Turkish contractors, who abandoned projects worth $19 billion in Libya in 2011 and were hoping to return with a bang.