Is Putin getting serious on Libya?

As Prime Minister Dmitry Medvedev led the Russian delegation to the Palermo conference on Libya, Moscow spoke of its economic interests in the country but, most importantly, was sending a strong political message to warring factions. 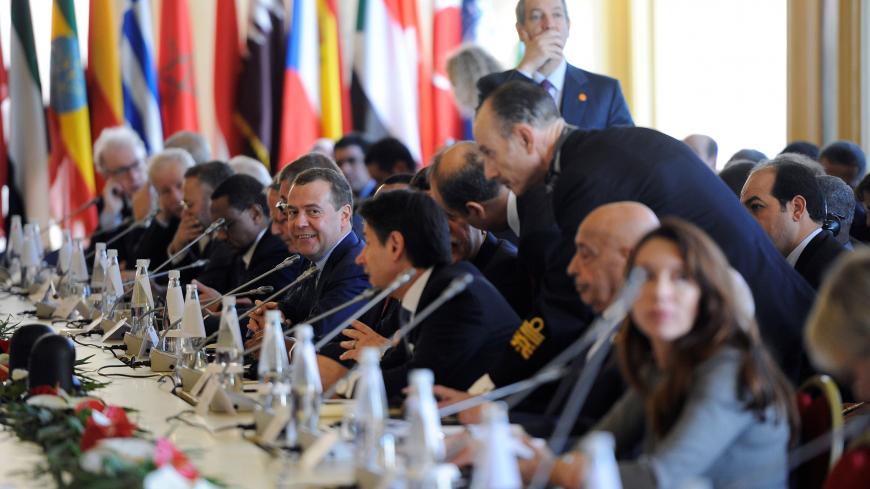 MOSCOW — Over the last few weeks, apart from the usual Syrian track, Libya has dominated Russia’s Middle Eastern agenda. On Nov. 12, Russian Prime Minister Dmitry Medvedev led the Russian delegation to Italy for a two-day conference in Palermo in an Italian bid to bridge the parties in conflict, reunite Libya’s institutions and craft a path to elections. Previously, a similar attempt by France bore little fruit.

Al-Monitor recently reported about Libyan military strongman Khalifa Hifter’s visit to Moscow on Nov. 7, where he held talks with Russian Defense Minister Sergei Shoigu and the head of the general staff of the Russian army, Valery Gerasimov. The alleged head of the Wagner private military contractor group, Evgeniy Progozhin, was also spotted at the talks, which raised speculation about a possible deployment of Russian mercenaries in Libya.

“All of our activity in Libya is meant to demonstrate we are ready to contribute to the settlement process in this country. We welcome efforts by the UN envoy on Libya, Ghassan Salame, who is working hard [and has taken] some critical steps toward the settlement process. His action plan was adopted by the UN Security Council, including Russia. It’s now our major objective to help the parties settle their disagreements, ensure implementation of the Skhirat agreements and negotiate the issue of holding elections,” Lev Dengov, head of the Russian Contact Group on Libya — a joint initiative formed in late 2015 by the Foreign Ministry and the State Duma — said in an exclusive interview with Al-Monitor a year ago. Today, the respective moves by the Foreign Ministry and the Defense Ministry are meant to emphasize that Moscow hasn’t changed its attitude in this respect.

The double-engagement policy in Libya by the Russian diplomats and by the Russian military with Libyan Prime Minister Fayez Sarraj and Hifter, respectively, has bewildered some and amazed others: Are the Foreign and Defense ministries showcasing a classic interagency rivalry, each with a stake in a different party, or is Russia diversifying its toolbox, channels of contacts and hedging the potential risks of placing all its eggs in one basket? Or has the Kremlin made its decision in favor of Hifter, as many in the West presume, with the outreach to Sarraj's people just a facade of multilateralism to have the Russians in the game as probably the only remaining objective mediator? In fact, all three theories have some plausibility and are not necessarily mutually exclusive.

In Palermo, prior to the official gathering, Medvedev sat down with Italian Prime Minister Giuseppe Conte, Egyptian President Abdel Fattah al-Sisi, Tunisian President Beji Caid Essebsi and Hifter for a two-hour meeting. The encounter angered the Turkish delegation, which stormed out of the conference over what it saw as “an attempt to keep Turkey out of the process.” Russia’s deputy foreign minister didn’t mention whether Sarraj was present at the unofficial gathering, but the Turkish party, according to The Associated Press, was irritated that consultations involving Sarraj and Hifter were brokered by parties that excluded the Turks.

“Some countries [are] trying to cripple the process [of transformation in Libya] for their own interests. … What Libya needs for stability is less foreign intervention, not more,” Turkish Vice President Fuat Oktay complained, without naming names.

The delegation led by Sarraj walked out of the meeting later that day just as Hifter was delivering his remarks.

Despite the gloomy prospects for a Libyan reconciliation, Medvedev came to Palermo with a long-term agenda of Russian economic engagement with Libya.

Earlier, the first deputy head of the Russian government office, Sergei Prikhodko, who until May 2012 had been in charge of the Kremlin's foreign policy department, said Russian companies will participate in joint investment projects in Libya “when the security situation in the country is normalized and unified government institutions are formed.

"There are spheres where effective cooperation is already possible — for instance, in boosting trade turnover. ... The interest of Russian business circles toward Libya is evident, and this is a good prerequisite for close joint work. We intend to prepare the conditions to restore partnership in different spheres once the circumstances become more favorable," Prikhodko concluded.

In Palermo, Medvedev further endorsed the Skhirat agreement as a way to facilitate progress in settling Libya.

"I am positive that it can be done through multilateral efforts in accordance with the decisions made by the United Nations Security Council. Our country has always insisted that there should be no distortions and misinterpretations," he said.

It certainly is no coincidence that Putin dispatched Medvedev on a Libya mission. The bombing of Libya in 2011 by France, the UK and the United States, as well as the killing of longtime Libyan leader Col. Moammar Gadhafi, occurred with the backdrop of Russia's abstention on a key Security Council vote during Medvedev’s presidency (2008-2012). Back then Putin and Medvedev allegedly sparred over the decision, and the outcome of the Libya campaign has had a major influence on Russian foreign policy thinking, including relations with the West, and impacted Putin’s own decision to intervene into Syria in 2015.

The message Putin is sending to Medvedev with this designation is clear: "You [helped] break it, now you [help] fix it" — or pay for it with [your own] political capital, if you fail.”

Medvedev said in Palermo, "We remember the way various resolutions were adopted then. I made certain decisions myself, including those concerning the weapons embargo on Libya and the introduction of the air exclusion zone. It was claimed that the decisions were to help stop violence and create conditions for development. Regrettably, all this remained unimplemented. This should be remembered to ensure the same scenario should not have a rerun in any other country." The comments were made with a sense of regret for having trusted Europeans and Americans at the time where he genuinely thought he could reset Moscow’s relations with both.

"We are determined to do everything possible to ensure that a lasting peace sets in on Libyan soil and that other countries escape its tragic fate," Medvedev said, sounding very much like what Putin would want Libya players to hear from someone who has a personal story of putting trust into initiatives that were never meant to be implemented in the way they were drafted.