Russia’s 'leading from behind' strategy on Libya

Russia’s Libya policy is less about Libya and more about Europe, hence Moscow’s preference to let the Europeans take the public lead on the conflict. 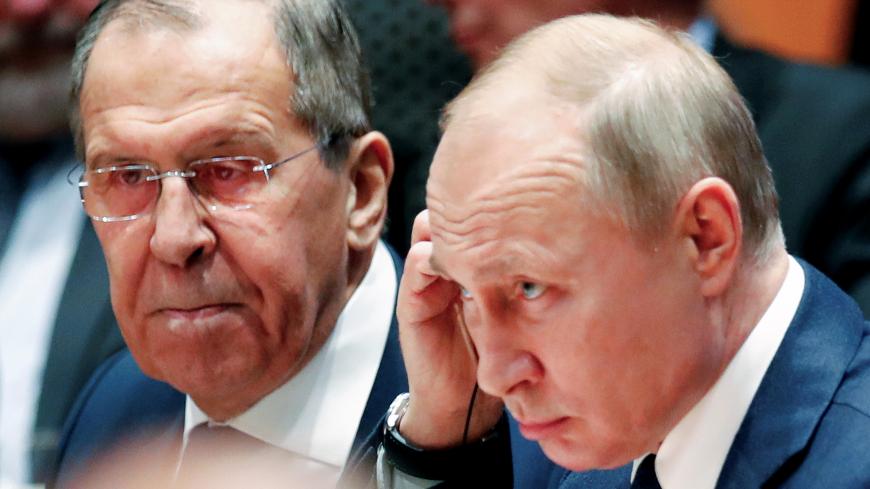 On Jan. 13, Russian President Vladimir Putin traveled to Berlin for a Germany-sponsored peace conference on Libya. A few days earlier, Moscow, in partnership with Ankara, hosted its own talks between leaders of the warring parties — Libyan National Army’s commander Khalifa Hifter and chair of the Government of National Accord Fayez al-Sarraj. The talks in Moscow didn’t lead to a major breakthrough that could have cemented the Russian-Turkish cease-fire agreement clinched between Putin and Turkish President Recep Tayyip Erdogan in Istanbul on Jan. 8. The Kremlin might have expected “a key agreement” to be signed in Germany, which also didn’t happen. Nonetheless, the week of top-level Russian diplomacy on this track didn’t leave Moscow empty-handed.

The NATO-led military campaign in Libya in the spring of 2011 and the subsequent killing of its ruler, Moammar Gadhafi, in October of that year had a profound impact on Russia’s relations with the West and Moscow’s own Syria policy. Coupled with Russia’s takeover of Crimea and the war in the east of Ukraine in 2014, Russia’s relations with Europe and the United States soured to the point where the parties have virtually exhausted the bilateral agenda they have carefully developed for over 20 years. The activity on the tracks that until that point kept the relationship going was halted.

Russia’s decision to intervene in Syria was as much driven by Russia’s security concerns as by Putin’s desire to fix the relationship with the West on new grounds — through the formation of a coalition to counter the Islamic State. When the numerous appeals and a number of practical efforts failed, Russia activated its regional profile and created “realities on the ground” that made some of the Western states change their tone and posture toward Moscow.

While Russia’s Syria policy was initially more oriented toward “a deal” with the United States, the Libyan track was perceived by the top Russian decision-makers as having to do with Europe.

Although Russia had rather strong positions in Libya under Gadhafi, it essentially had to start from a low level when the long-time ruler of the country was killed and the country slipped into chaos and war.

In December 2017, Al-Monitor spoke with head of Russia’s contact group on Libya Lev Dengov. By that time, Russia’s Libya policy had already been crystallizing as a “multilayered pie” of state interests, pursuit for an improvement in its global status in confrontation with the West and the profit motive of certain Russian groups.

Back then, Dengov articulated a strong European angle in the Russian policy on Libya.

“Europe, especially its Mediterranean part, has been suffering from mass flows of illegal immigrants and from the emergence of new terrorist epicenters. So the [goals] of nipping the terrorist threat in the bud and putting a cap over the migration flow are two of our priorities,” Dengov explained.

By then, Moscow had been engaging with southern tribes in Libya as a potential way to halt migrants in their tracks. Asked whether this effort had any success, Dengov briefly answered, “Russians have established contacts with virtually all southern tribes, with their elders and representatives.”

While most of the Western coverage for Russia’s policy in Libya was focused on the presence of Russian mercenary groups, such as the Wagner Group, which is owned by Yevgeny “Putin’s chef” Prigozhin, Russia’s state policy had been undergoing a transition. From a limited engagement, including through private military contractors, Moscow has been gradually increasing its influence in the political segment of the conflict.

Medvedev endorsed the Skhirat agreement signed in December 2015 as a framework for settling the Libyan conflict. But his participation was meant to convey Russia’s interests in Libya and send a signal to the warring parties that Moscow was willing to step up its efforts as a “true broker.”

"We remember the way various resolutions were adopted then. I made certain decisions myself, including those concerning the weapons embargo on Libya and the introduction of the air exclusion zone. It was claimed that the decisions were to help stop violence and create conditions for development. Regrettably, all this remained unimplemented," Medvedev said at the time.

His comments were made with a sense of regret for having trusted Europeans and Americans at the time where he, while in the position of the president of Russia (2008-2012), thought he could reset Moscow’s relations with both.

The five-hour conference in Berlin was preceded by four months of preparatory efforts, including five preliminary rounds and consultations of senior officials. Moscow has continued to edge into the position of a crucial player in the Libyan conflict, but as before preferred to keep its public profile rather low until it first hosted the intra-Libyan talks and, second, Putin himself decided to lead the Russian delegation to Berlin.

"It was thanks to our insistence that the [German] organizers retreated from their original plan to convene a meeting without the Libyan parties and invited the Libyan leaders to the conference," said Lavrov, who is now acting Russian foreign minister until a new government in Russia is formed.

"The number of participants from among Libya’s neighbors increased also at our initiative," Lavrov added, following the talks in Berlin.

The fact that a few days earlier Hifter departed Moscow without signing up to the Russia-sponsored truce statement dealt a blow to Russia’s reputation in the public view.

Putin may not have enjoyed having Hifter rain on his parade, but Moscow put up a good face rather quickly. Shortly after Hifter’s departure, the Defense Ministry announced the general was given two more days to think over the decision to sign the paper — the time before the Berlin conference. The next day, the Kremlin claimed that Hifter had sent Putin a letter where the former extended his gratitude to the Russian president for the conference in Moscow and expressed readiness to visit Russia for yet another “post-Berlin” talk.

Russia ultimately took credit for laying out the basis for the Berlin statement that stressed the need for “a lasting cease-fire," the launch of the political process, commitments to the territorial integrity of the country and the need to “ensure access of all Libya’s parties — religious, ethnic and political groups — to natural resources."

From this perspective, whether the cease-fire in Libya holds or whether the points the conference participants agreed upon can be implemented is a poor measurement of Russia’s success/failure on the Libyan dossier.

Now that Russia and the EU have a common foreign policy item on the bilateral agenda, German Chancellor Angela Merkel is traveling to Moscow to discuss something other than Ukraine and the Europeans are finally feeling engaged — and relevant — in dealing with an issue vital to their security. Russia’s political investments have already paid off. Economic ones, however, are yet to be regained.

But whether it is its Europe-oriented or profit-driven approach, Russia has entered another conflict in the Middle East North Africa region with its goal being to have its best diplomatic performance — first with the Europeans, then with the Middle Easterners. Unlike in Syria, however, in Libya Moscow appears ready to play a “secondary” role, allowing the Europeans to take a more public stance and the involved Middle Eastern states to do the main job of taming their proxies on the ground.

At the same time, both the European and regional powers would still have to turn to Russia to have the results of their work delivered to the negotiating table and worked into a final agreement. In a way, it’s Russia’s own version of the strategy of “leading from behind.”

“We subscribed to a number of important initiatives in that [Berlin] statement,” a senior Russian diplomat privy to the talks in Berlin and speaking not for attribution told Al-Monitor.

“The process of making them all materialize is not going to be easy and will take a while; we understand that. But we’ll have to be working on these issues with European colleagues for a long time, which may eventually turn out to be healthy for our relations,” the diplomat added.