While Russia doesn't want to see Khalifa Hifter’s self-styled Libyan National Army collapse, there are signs Moscow’s interests may align more closely with other figures in the country’s eastern government. 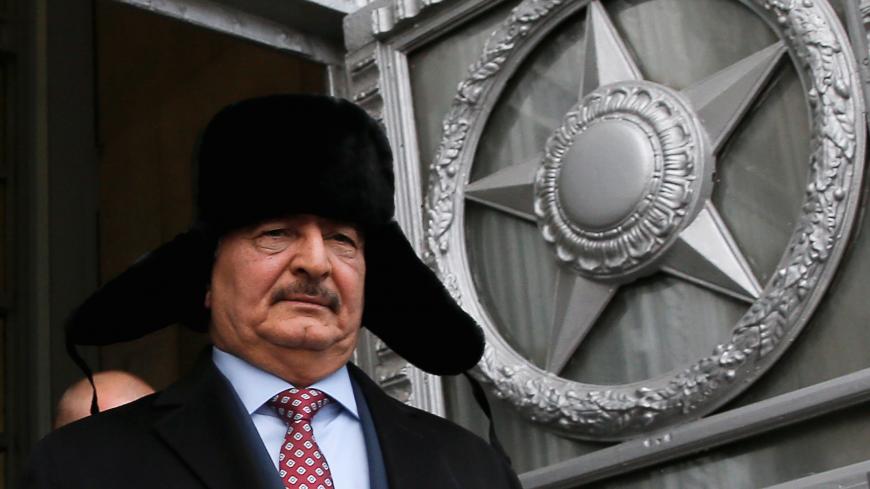 While Washington has been accusing Moscow of inflaming the conflict in war-torn Libya by sending mercenaries to fight on behalf of strongman Khalifa Hifter, signs have been emerging that Russia is increasing contacts with the Hifter-aligned eastern-based parliament at the expense of Hifter himself.

On May 7, US State Department spokesman Chris Robinson said Moscow’s support of Hifter had led to “a significant escalation of the conflict and a worsening of the humanitarian situation in Libya." Meanwhile, late last month, the head of Libya’s eastern-based parliament said his political road map, presented to the parliament in late April, was drafted by Russian experts working with parliamentarians in Libya.

During a meeting with eastern Libyan tribes April 27, Aguila Saleh Issa, president of the Tobruk-based House of Representatives, said no secret was made of the presence of Russian political advisers in Libya, adding that these advisers had lent him support after Hifter did not win the fight for Tripoli.

Is Hifter being sidelined?

Saleh’s admission of the role of Russian experts in drafting the road map came after Hifter's April 27 statement that he has taken up the reins of power acting on behalf of the military — not the eastern government. Thus Saleh essentially acknowledged a “silent” coup in eastern Libya.

The military leader’s step seemed to have been rooted in the rising position of the Tobruk parliament president and his initiatives, among other factors. Hifter had lost some backing after a string of defeats in the battle for Tripoli. External players such as Russia were increasingly predisposed to believe Hifter was unable to solve the matter militarily and only stood in the way of the peace process launched in January at the Berlin Conference. That is why they were increasingly inclined to think they should instead deal with Saleh and Abdullah al-Thani, the head of the interim government in the east, and encourage them to come to the fore in the dialogue with the Government of National Accord while gradually sidelining Hifter.

The scenario was evidently unacceptable to the field marshal and apparently led to his declaring himself Libya's ruler.

Given that Russia had helped the Tobruk parliament president draft the peace initiatives and banked on them for resolving the conflict, it could not support Hifter’s attempts to usurp power and withdraw from the Skhirat agreement that had led to the Government of National Accord.

Russian Foreign Minister Sergey Lavrov said at a news conference April 28, “We did not approve of the recent statement of Sarraj, who refused to talk with Hifter. Nor do we approve of the statement that Hifter will now single-handedly decide how the Libyan people will live. Neither way is conducive to a lasting compromise.”

It is the first time that Moscow seems to have clearly voiced discontent with Hifter’s actions since the strongman’s self-styled Libyan National Army launched an operation against Tripoli in April 2019.

At the same time, the Russian foreign minister expressly highlighted that Saleh’s initiatives receive Moscow’s support. Lavrov indicated that he believes they give impetus to the Libyan peace process, unlike Hifter’s steps.

Lavrov said Saleh had called for a national dialogue “aimed at the formation of common government bodies which would represent evenly and equally Libya’s three key regions.” The foreign minister stressed the importance of allowing Libyans to identify for themselves the approaches that are mutually acceptable, while noting, “External actors should support such approaches in every way.”

He added, “I hope that the lessons of the previous attempts will be learned, and we will be encouraging the Libyans themselves to talk and find a compromise.”

Even some within Russian business circles have leveled criticism at Hifter. A representative of the country’s energy sector, speaking to Al-Monitor on condition of anonymity, said, “What repercussions does Hifter’s desperate gesture have for the energy markets? A million barrels of Libyan oil will not return to the market anytime soon — nor will the joint venture with Gazprom resume its activities in the eastern part of the country. The unhealthy state that Libya got into circa 2014 will pervade it in the years to come. Unfortunately, it is now Hifter who stands in the way of constructive dialogue and recovery.”

It should be noted that this is the second time this year that the field marshal has derailed Russia’s peace initiatives on Libya, thus disgruntling Moscow. In January, Russia and Turkey initiated a Moscow meeting between Hifter and the head of the Government of National Accord for a possible cease-fire agreement, but to no avail.

Amid the commander’s setbacks in the campaign to seize Tripoli, the Kremlin is growing increasingly wary of his behavior, which is resulting in Russian attempts to find other, more reliable figures on the Libyan playing field. Saleh must have been on the list of such candidates. However, it is still unclear what, if any, nongovernmental organizations dealt with him, or whether all this was done by advisers representing the Russian Foreign Ministry. It cannot be ruled out that those experts who worked with Saleh are currently providing the same services to the interim government led by Thani. One particularly likely candidate is the Business Advisory Council for Libya headed by Stanislav Kudryashov, which positions itself as the representative of Thani’s government in Russia.

Meanwhile, organizations such as the Foundation for National Values Protection — that is, those linked to Wagner Group boss Yevgeny Prigozhin — are reported to have tried to feel out Saif al-Islam Gahdafi (former Libyan leader Moammar Gadhafi's son), establish direct contact with him and propose him as a possible alternative or successor to Hifter. Finally, the Russian Contact Group for an intra-Libyan settlement — headed by Lev Dengov and under the Foreign Ministry and State Duma — promotes the interests of the Sarraj-led Government of National Accord and political organizations in western Libya.

Despite its cooler relations with Hifter, Moscow will continue to provide the Libyan National Army with assistance as it is the only political force in Libya to have entered into a partnership with Russia so far. Although the Kremlin says it follows an equidistant approach toward both parties to the conflict, the level of contact with Sarraj is much lower than that with Hifter. This is because Russia’s mercenaries act on the field marshal’s side.

Russia claims that the mercenaries supporting the Libyan National Army do not represent the country’s interests and are not sponsored by Moscow, yet the link between the bosses of such groups and the Kremlin is evident. Thus, Moscow will keep using them as a leverage to pressure Hifter. In case of necessity, military contractors will likely be ordered to withdraw from the front to make him more cooperative, as it was shortly before the Berlin conference. But they also could be ordered to return to business in greater numbers to prevent Sarraj and his ally, Turkey, from strengthening their positions too much. In any case, Hifter’s victory is not on Moscow’s agenda. It just wants to stop the Libyan National Army’s front from collapsing, which will help the Kremlin to act as a mediator on the Libyan track.