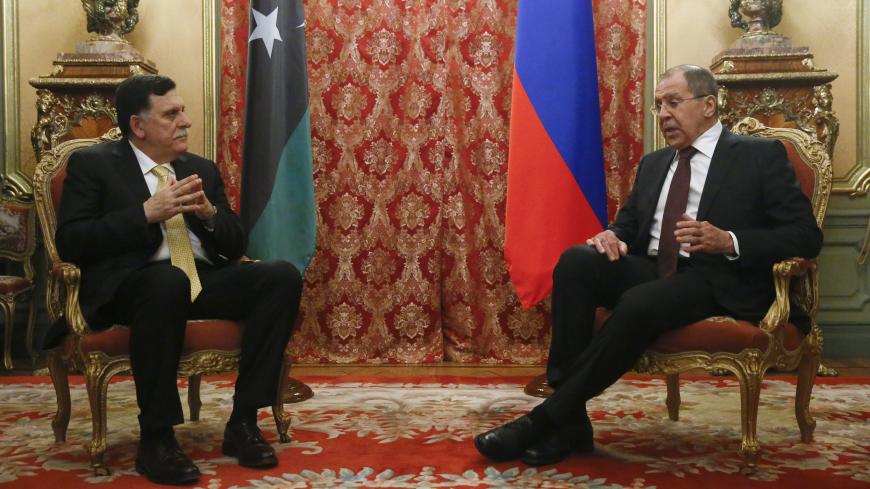 MOSCOW — Mohammed Siyala, the foreign minister of the Libyan Government of National Accord (GNA), came to Moscow this week for talks with his Russian counterpart, Sergey Lavrov. While Syria has been occupying center stage of Russia’s Middle East agenda, Moscow has never ceased its activities in Libya since it became involved in the peace process in mid-2014 and began building contacts with multiple Libyan factions.

The Lavrov-Siyala meeting Dec. 12 focused on prospects for resolving the disputes of rival factions in Libya under the UN action plan. They also discussed the prospects of Russia shortly reopening/returning its embassy to Tripoli. The ministers expressed interest in restoring full trade and economic partnerships as the situation in the country normalizes.

Before Moammar Gadhafi was toppled, Russian companies had lucrative energy contracts in Libya. Moscow wants those back, while Libyan authorities see Russian businesses as key to restoring the country. Some Russian companies, such as oil giant Rosneft, have already received permission to operate in Libya. Speaking to Kommersant newspaper, Siyala said the GNA’s newly formed Presidential Guard is prepared to guarantee the safety of such companies’ employees. He also mentioned that Libyans expect Russia to finish construction of the $4 billion, 500-kilometer (311-mile) railroad connecting Sirte and Benghazi, and that the line might even be extended both to the east, to Egypt, and west, to Tunisia.

Moscow is still concerned about two Russian sailors — members of the international crew of the Temeteron tanker detained in Libya in June 2016 — who remain in custody on charges of oil smuggling. Siyala promised to expedite legal proceedings but said the rest will fall under a court’s jurisdiction.

In March, the Libyan Coast Guard captured the Russian MV Merle bulk carrier suspected of being involved in smuggling scrap metal. Proceedings necessary to return the ship to its Russian owner are underway.

It was the capture of the Russian Mikhail Chebotarev tanker in September 2015 that caused Moscow to form the Russian Contact Group on Libya — a joint initiative by the Foreign Ministry and the State Duma. The group is composed of military experts and parliament members and is broadly supported by Chechen President Ramzan Kadyrov. The group’s activity is directed by Deputy Foreign Minister Mikhail Bogdanov and Adam Delimkhanov, Chechnya’s representative in parliament.

The contact group, led by Lev Dengov, who in his current role is also an adviser to Kadyrov, has become Russia’s primary political tool in working on Libyan issues. The group organized visits to Russia for all major figures in the Libyan conflict.

Siyala’s trip was yet another step by Moscow to build further ties with the Tripoli-based GNA while continuing to preserve balanced partnerships with other major parties.

Following the Lavrov-Siyala meeting, Dengov told Al-Monitor that Russia currently has no timeline for its Libya policies except for implementing the Skhirat agreement, a UN-backed pact signed Dec. 17, 2015, in Skhirat, Morocco, to form the GNA.

“There’s simply no alternative” to the pact, said Dengov. “All of our activity in Libya is meant to demonstrate we are ready to contribute to the settlement process in this country. We welcome efforts by the UN envoy on Libya, Ghassan Salame, who is working hard [and has taken] some critical steps toward the settlement process. His action plan was adopted by the UN Security Council, including Russia. It’s now our major objective to help the parties settle their disagreements, ensure implementation of the Skhirat agreements and negotiate the issue of holding elections,” he added.

Asked about Russia’s own interest and stake in the process, Dengov said Libya is a “vital strategic point for Africa, for the Middle East, for Europe and for Eurasia.”

“Europe, especially its Mediterranean part, has been suffering from mass flows of illegal immigrants and from the emergence of new terrorist epicenters. So the [goals] of nipping the terrorist threat in the bud and putting a cap over the migration flow are two of our priorities. Today, the migrants from this region aren’t posing a direct threat to Russia, but you never know how the migration flows and trends may shift in the near future — they could start heading toward our borders.”

Russia has been engaging with southern tribes as a potential way to halt migrants in their tracks. Asked whether this effort has had any success, Dengov said, “By now, Russians have established contacts with virtually all southern tribes, with their elders and representatives.”

He added, “They welcome our outreach to them and they have been incredibly instrumental in the intra-national peace process. What we really want in this kind of work is to avoid an impression of encroaching on their sovereignty. We aren’t imposing ourselves; we are just offering our ideas. If all the parties welcome us, we are ready to further interact with them all, to facilitate their own interaction among themselves. And such an approach is also helpful in putting a cap on the flows of migrants.”

When speaking of the terrorist threat to Libya and the prospects of the Islamic State (IS) relocating there, Dengov voiced his personal opinion that this prospect is unlikely in the immediate term.

“There are many other countries — and I’m not saying which they are — that are more ‘benevolent’ for [IS]. Because of its instability, Libya is a desired place for groups like IS, but I don’t see it as a threat as of today. The geography and logistics are simply such that it’s complicated for [IS] to move to Libya that easily.”

Despite Rosneft’s contract with Libya’s National Oil Corp. and purchases of Libyan oil to re-sell, Dengov denied energy resources are a primary incentive.

“Russia is a country rich in natural resources and there are countries around Libya that have a far greater need for Libyan oil. Yet it’s important for Russia to maintain our contacts in energy cooperation because it would ultimately work to strengthen Russia-Libyan relations,” he said.

As for what Libya wants from Russia, Dengov insisted that the “two major resources Libyans need from us are honesty and fairness.”

Dengov also dismissed the presence of Russian private military contractors (PMCs) in the country. Earlier this year there were reports that Russia had deployed special forces to an air base in western Egypt near the border with Libya, a move the United States deemed as an attempt to support Gen. Khalifa Hifter, the commander of the Libyan National Army.

“Indeed, the RSB-Group has been present in Benghazi on demand from a private European company to do mine clearing at a cement factory there. But it’s not a PMC; neither are there other PMCs or Spetsnaz [special forces] military units,” Dengov claimed.

“We remain committed to all respective UN resolutions. The same is true for the arms embargo. We are coming to believe that until the Skhirat agreements enter into force, any moves by any [external] party that can lead to dominance of one Libyan group over another can destabilize the situation. We are maintaining [a level] approach to the warring parties, to not tip the fragile balance. In Libya, we don’t want to be associated with one party. There are enough conflicts between parties in Libya today to set the country on fire again, so we walk incredibly cautiously.”

Dengov said the role of Chechnya and Kadyrov had a special place in the Russian approach to Libya. He reiterated GNA Deputy Prime Minister Ahmed Maiteeq’s September statement about Chechnya “being the region whose experience in dealing with terrorism and post-conflict restoration deserves attention.”

“Kadyrov is a Sunni Muslim who has been rescuing Russian citizens in Libya, Syria and Iraq. He has the experience and he cares for Muslims around the world, defending them from different threats. Libyans see this, they appreciate it and they reach to him. He has been very helpful to the policies of the Russian state there.”

Speaking of Russia’s assessments of the prospects for the Libyan settlement, Dengov concluded, “Moscow can make the best of its interaction with all parties, but first and foremost, the Skhirat agreements” should be implemented, with whatever modifications the sides deem necessary.

“We are being watchful that no one imposes forms or formats that would pressure the parties; they have to agree with one another willingly. But if Russia could help the parties in any way and they call on us to do so, we’d be happy to deliver,” he concluded.