Allegations that Moscow is deploying troops to Libya have triggered domestic debate over Russia's role in the crisis. 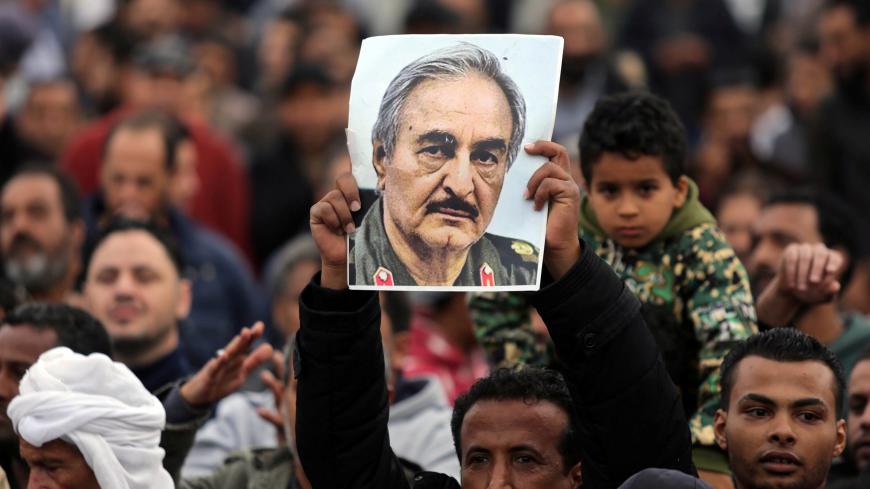 A man holds a poster of eastern Libyan military commander Khalifa Hifter during a rally demanding Hifter to take over, after a UN deal for a political solution missed what his supporters said was a self-imposed deadline on Sunday, Benghazi, Libya, Dec. 17, 2017. - REUTERS/Esam Omran Al-Fetori

MOSCOW — Russia is believed to have been deploying dozens of troops to Libya over the last few days. The story, first reported by The Sun, sheds light on what the British media said Prime Minister Theresa May had been briefed by the British intelligence as Russia’s “new Syria” operation. The troops Moscow has sent to Libya allegedly are meant to back up the commander of the Libyan National Army, Gen. Khalifa Hifter, who is in de facto control of much of eastern Libya. Hifter has long urged Moscow to help his army with troops and military equipment.

Russia allegedly deployed dozens of special forces (Spetsnaz) servicemen as well as officers of the Chief Directorate of the General Staff, previously known as the GRU, Russia’s main military intelligence service. Some of these forces had been in Libya initially on a training and liaison mission but they received reinforcement within the last few days. Russia has also reportedly established at least two military bases alongside Libya’s coastline in the towns of Tobruk and Benghazi, that are additionally covered by mercenaries from the notorious Russian Wagner Group. The deployment to Libya has been discussed at least since earlier this year, yet some military experts argue the Wagner Group has had longer outposts in the country.

According to The Sun, Moscow has also deployed Kalibr anti-ship missiles and S-300 air defense missile systems in the country to keep hold of the biggest illegal migration route from Africa and the Middle East to Europe.

The head of the Russian contact group on the intra-Libyan settlement, Lev Dengov, denounced the report by the British tabloid as having “nothing to do with reality.”

“This isn’t the first time that we are faced with a situation when Russia’s interaction with one party in Libya is twisted to appear as a policy of unilateral support,” Dengov told Russia’s RBK business daily.

“As of today, the leadership of our country formulated the state policy vis-a-vis Libya and pursues concrete tasks that deal with restoration of economic ties between Russia and Libya — tasks of engaging with all parties. Russia is also in close contact with key international players interested in Libya’s restoration — France and Italy — as well as regional players," he added.

The Russian Embassy in the United Kingdom also dismissed The Sun's report as “a new attempt to shift the responsibility over the destruction of the country and ruined lives of millions of Libyans on to Russia that had nothing to do with NATO’s offensive [on Libya] in 2011, which grossly violated a number of UN resolutions.”

A representative of the embassy told RIA Novosti, “Russia has never sought a military interference and supports peacemaking efforts in Libya. We are fully committed to Security Council Resolution 1970 that placed an embargo on arms supplies to Libya."

At the same time, a military source close to the Russian Defense Ministry confirmed to RBK that the Russian troops, including elite forces sent from the Moscow region, have been gradually deployed to eastern Libya in recent months. A local source in the Libyan government also spoke to the Russian media of a “recent military activity” by Russia in the region.

The news sparked a new round of debate in Moscow over Russian interests in Libya, and whether another intervention at this point is worth investing in.

Semyon Bagdasarov, director of the Moscow-based Center for Middle Eastern and Central Asian Studies, who argues for a radically stronger Russian presence, said Moscow has at least three incentives to project power in Libya.

“All stakeholders in Libya are interested in oil. Today there is more oil produced in the country than under [former President Moammar] Gadhafi. The Europeans very much want to piggyback on these pipes. Russia — should the outcome of the upcoming Libyan elections turn in its favor — can also significantly expand its presence in this market. There is now a Moscow-friendly government in Tobruk, and presidential candidate Aref Ali Nayed has recently met with President [Vladimir] Putin,” Bagdasarov told Moskovsky Komsomolets newspaper.

Russia is eager to reinstate many of the oil contracts it lost following the death of Gadhafi, and Russia’s Rosneft and Libya’s National Oil Corporation signed a cooperation agreement in February 2017. One view in Moscow is that the move is dictated not so much by coveting the revenue, but more by the desire to ensure control of oil production in the country to prevent a drastic fall in oil prices.

“The second priority is to eradicate terrorists there,” Bagdasarov noted. “There is a lot of ground for this type of work in Libya — no lesser than in Syria — and Moscow will be able to deliver.”

He concluded, “Finally, a return to Libya may restore Russia’s positions in the arms exports to the country. The fall of Gadhafi came at a cost of $10 billion to Russia — that’s what it lost in military contracts that were never fulfilled. A Russian military base there would help Libya become a top buyer of Russian arms again.”

Alexander Golts, a military observer for the liberal New Times magazine critical of the Kremlin’s assertive outreach to the Middle East, argues the opposite.

“The calculations for potential benefits to Russia [in case of intervention into Libya] are based on foundations that are more shifting than the sands in the Libyan desert. They argue for Russia to get involved into a country with a seven-year-long civil war … a dyarchy … and a dozen of uncontrollable tribal militias. Stabilization in the country is a very distant prospect. Russia’s right to interfere in all of this is doubtful. In Syria there was the government’s invitation that is in accordance with the international law. Military aid to Hifter would mean another 'secret operation' that when revealed will turn into another shame for our country,” Golts wrote in the dail Ezhednevny Journal Oct. 11.

“There’s a strong misinterpretation of fragmented information on Libya that is coming from different channels,” Grigory Lukyanov, assistant professor at the School of Political Science of the Moscow-based Higher School of Economics, told Al-Monitor.

“The rumors over a Russian military base in Libya have been around for at least two years. Now they are saying there is a base in Benghazi. It is a relatively big city and there is no way you can hide an awl in a bag there – should there be a Russian military facility, local freelancers hunting for sensational stories would have been all over this news, which is not the case now,” Lukyanov, a leading Russia watcher of Libyan developments, argues.

He added, “A military presence goes against the stated interests of Moscow for it breaches the 'principle of equidistant' that Russia practices with key Libyan actors. But the Libyan settlement does need some fresh alternative approaches and Russia’s experience can be a valuable asset in this process.”