The only positive outcome of Turkey’s "tension strategy" on Libya has been paving the way for the Berlin Libya conference on Jan. 14. 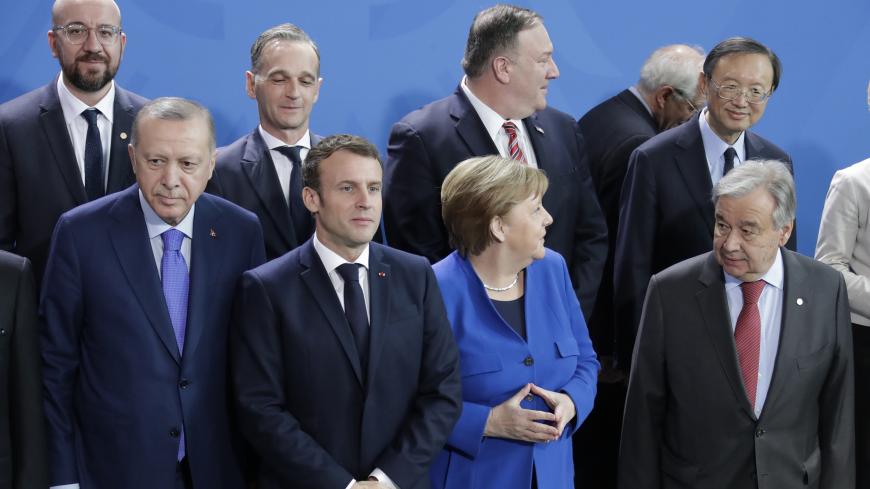 Turkey’s Libya strategy seems to have produced many side effects with the situation on the ground rapidly escalating.

Turkey’s hard power tactics on Libya perhaps paved the way for the Berlin summit by provoking the international community to take action against Turkey’s unilateral moves, but the final communique that the foreign powers agreed on during the conference are conflicting with Ankara’s interests and military plans. The provision that envisages sanctions on parties that break the United Nations arms embargo is effectively blocking Turkey’s military venture. The communique also calls for a formation of a unity government that is recognized by the war-torn country’s Tobruk-based parliament that strongly opposes the military cooperation and maritime boundary agreements that Turkey signed with the Fayez al-Sarraj-led Government of National Accord (GNA).

Russia, Egypt and the United Arab Emirates (UAE) have boosted their support for Libyan National Army (LNA) leader Khalifa Hifter who announced Jan. 18 that he would block oil exports from the country's main ports in retaliation for Turkey’s actions. The disruption in the oil production can have “devastating consequences first and foremost for the Libyan people,” warned the United Nations Libya mission.

Erdogan had to agree to work with Russia, but jointly brokered cease-fire talks between the GNA led by Fayez al-Sarraj and the Hifter-led delegation have not produced the desired results.

Turkey was about to register the summit as a successful outcome of its hard power tactics, but Hifter left the negotiating table without signing the truce agreement leading everyone back to square one.

Why has Turkey’s “tension strategy” not yielded the results Erdogan has promised?

The capacity problems Turkey’s air force is facing after the 2016 botched coup attempt aside, the distance between the two countries is preventing Turkey to conduct effective air operations in the Libyan airspace. Turkey’s hopes to use neighboring countries as logistical routes and bases were also dashed by the staunchly neutral positions of Tunis and Algeria.

Erdogan has been particularly disappointed by the Ennahda movement, when Tunisian parliament Speaker Rached Ghannouchi, leader of Ennahda and a close friend of Erdogan in the Muslim Brotherhood network, said that Tunisia will not be part of the Libyan conflict. Tunisian President Kais Saied denied Turkey’s claims that Tunis was supporting the Sarraj-led GNA.

Algeria also has adopted a similar position by announcing that the country will maintain its distance with the warring Libyan parties after some news reports claimed two Turkish frigates were en route to Algerian ports.

Egypt, as one of the critical allies of Hifter, has challenged Turkey’s plans more openly than ever. Egyptian President Abdel Fattah al-Sisi announced that Cairo is determined to take the necessary actions against any Turkish intervention.

The announcement has raised the prospect of turning Libya into a direct confrontation scene between Turkey and the Egypt-UAE bloc that has been at odds with Ankara’s foreign policy policies since 2013.

Egypt’s military exercise called “Qader 2020” coincided with the Moscow meeting leading many to consider the exercise as a show of force against Turkey.

Turkey’s Libyan venture also increased the tension in the competition over eastern Mediterranean hydrocarbon resources. Erdogan has argued that the deal Turkey signed with the GNA government to demarcate maritime borders would eliminate the Cyprus, Greece, Israel and Egypt bloc’s efforts to link eastern Mediterranean gas fields with European markets bypassing Turkey. In response, the bloc has stepped up these efforts by signing an energy cooperation deal between Greece, Israel and Cyprus.

On Jan. 8, foreign ministers of Greece, Egypt and Cyprus met in Cairo to declare the deals Turkey signed with the GNA "void," in a move that further deepens Turkey’s isolation in the international arena.

Turkey’s pro-government circles’ overoptimistic expectations about Turkey’s “pivotal role in Libya” ignores the change of wind in Libya. Turkey-backed Islamist forces under siege between Tripoli and Misrata were hoping to push back the Hifter-led forces with the help of Turkey’s military support, but in the end lost Sirte. The joint Turkish-Russian calls for a cease-fire came just as the Hifter-led forces were advancing toward Sirte.

The LNA seized the city without much conflict when a Salafist jihadist faction defected from the GNA and joined the ranks of the Hifter-led forces. The defection indicates the volatile nature of the conflict. Although Tripoli-based Salafists supporting the GNA are quite powerful, in the climate of war one should always keep in mind reality: Tribes or clans tend to favor the powerful party, similar to the scenario that has transpired in Syria.

Indeed, some 1,000 people from various tribes from several cities, including Benghazi, Tobruk, Bayda, Zintan and Ghat, gathered in Benghazi to pledge support to Hifter and the Tobruk-based parliament in early January.

Apparently, some elements of the ousted regime also back Hifter, including the daughter of late Libyan leader Moammar Gadhafi.

“When Turkish soldiers’ boots desecrate our homeland soil, which was watered by the blood of our martyrs, if there is no one among you to repel this aggression, then leave the battlefield to the free women of Libya and I will be at their forefront,” Ayesha Gadhafi said Jan. 2, declaring her support for Hifter.

As a result, Erdogan backpedaled and brought up the idea of recruiting mercenaries from Syria for Libya to limit the Turkish army’s role with coordination and training. Ankara’s plan was to boost air defense in and around the airspace of Tripoli, which Ankara designated as a “red line.” So far, the number of Turkish troops dispatched to Libya have reached 80.

However, Turkey’s efforts to recruit Syrian fighters appears to have caused rifts in the Syrian opposition ranks. Hence, Turkey didn’t have any choice but to sit at the table in Moscow.

The initial plan was to launch an initiative similar to Astana, but the Libyan equation does not allow such an initiative. In Astana, Turkey talks on behalf of the opposition while Russia and Iran talk on behalf of Damascus. In the Libyan conflict, on the other hand, Turkey has lost its leverage for mediation, while Russia retains its potential to act as a mediator. Furthermore, the counter front against Turkey is steadily expanding with new members and none of them were present during the Moscow negotiations.

“We would like to join the efforts by the Europeans, including the Germans, the French and the Italians, as well as Libya’s neighbors — Algeria and Egypt — and the UAE, Turkey, Qatar and the Russian Federation to channel them in one direction in order to urge the Libyan parties to the conflict to reach an agreement through negotiations, rather than to continue to sort things out by using force,” Russian Foreign Minister Sergey Lavrov said during a Jan. 14 news conference.

Lavrov’s remarks affirm Russia perhaps managed to block Turkey’s military involvement, but there is more to be done.

According to Sky News Arabia, Hifter laid down seven conditions before signing the truce, including the LNA will be deployed in Tripoli; Syrian fighters will withdraw from the country; Turkey will be excluded from the international force that will be deployed for peacekeeping; some armed factions in Tripoli will be abolished; and a new unity government recognized by the Tobruk-based parliament will be set up.

None of these are in line with Turkey’s interests in Libya and Erdogan’s self-contradicting remarks are not helping the cause.

Last month, Erdogan asked Russia to end its support to Hifter while announcing his intention to deploy troops in Libya. On Jan. 5, Erdogan denied to recognize Hifter as a legitimate actor in the Libyan war when opposition parties criticized Turkey’s one-sided Libya policy.

On Jan. 8, Putin said Russia and Turkey were acting as “mediators” in the conflict and called for a cease-fire, no objections were raised by Ankara.

On Jan. 13, Erdogan dispatched Turkey's defense and foreign ministers and spy chief to Moscow to sit at the same table with the Hifter whom he had labeled a putschist.

Another flip-flop came after Hifter refused to sign the truce and left Moscow.

“We will not hesitate to go after Hifter,” Erdogan said.

The only positive outcome of Turkey’s “tension strategy” was paving the way for the Berlin meeting on Jan. 19. Turkey’s most important objective is to make the maritime deal permanent, yet the result of the Berlin summit actually has made it more difficult.