Turkey's formalization of military support to Libya's internationally recognized government has prompted worries of an on-the-ground confrontation with Russia. 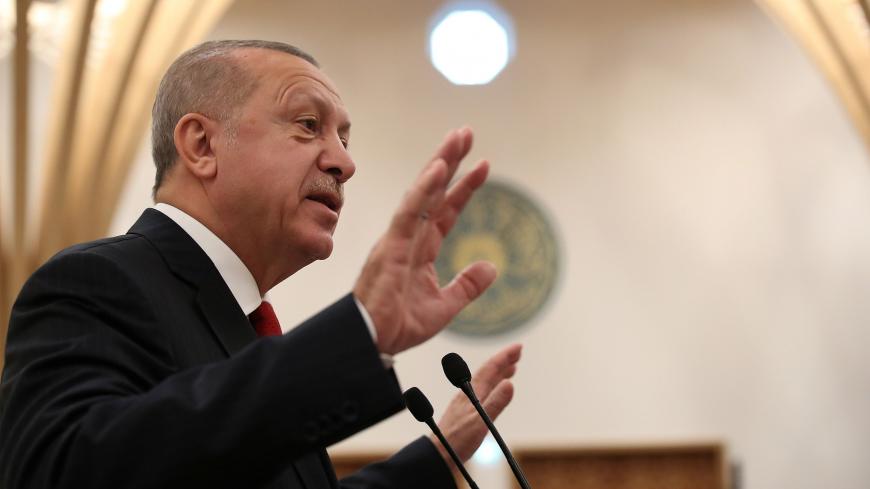 Turkey is poised to formalize its military support to Libya’s internationally recognized government, that would inclue dispatching a rapid reaction force to the war convulsed North African nation if need be, under the terms of an agreement that will be brought before the Turkish parliament for ratification

Turkish President Recep Tayyip Erdogan renewed his pledge to provide the Tripoli-based Government of National Accord (GNA) with backing in wake of a deal they signed Nov. 27. It covers intelligence-sharing and arms deliveries, among other things.

"We will be defending the rights of Libya and Turkey in the Eastern Mediterranean," Erdogan told the pro-government AHaber news channel Dec. 15. The announcement came a day after GNA Prime Minister Fayez al-Sarraj met with Turkish Foreign Minister Mevlut Cavusoglu and Defense Minister Hulusi Akar in Qatar, his government’s other top mentor.

Egypt, Saudi Arabia, the United Arab Emirates and France are aligned with Khalifa Hifter, the Libyan general turned warlord who seeks to topple the GNA with his Libyan National Army. Egyptian President Abdel Fattah al-Sisi swiftly took aim at Erdogan’s comments, riposting, “We could have intervened in Libya. But we didn’t do this and respected Libya’s circumstances to preserve fraternity.”

Hifter vowed last week to make a final push to take Tripoli, but the steady supply of arms and mercenaries to both sides has resulted in a stalemate since April, when Hifter launched his latest offensive. Ankara dispatched armed drones, which Hifter’s forces shoot down. The UAE supplied Hifter with more lethal Chinese-made drones, according to The New York Times.

A recent UN report showed that supporters of both camps have flooded either side with weapons, in breach of UN sanctions.

Hifter, 76, has waged an intermittent campaign to take Tripoli since 2014. Russian support, however, has allowed his forces to make advances in recent days.

Turkish muscle-flexing — most recently in Syria, where it launched an Oct. 9 assault against a US-backed Kurdish militia — has sparked a torrent of proposed US sanctions and alarm bells across the region. Erdogan shows no signs of backing down in the face of mounting pressure. He threatened over the weekend to kick US forces out of Incirlik air base and the Kurecik radar station in Malatya, which is used to spy on Iran, should US sanctions go into effect.

In tandem with their security agreement, Turkey and the GNA have also signed a memorandum of understanding on delineating maritime boundaries, which effectively extends Turkey’s continental shelf in the Eastern Mediterranean.

Ankara crafted the move to counter its regional rivals, Cyprus, Greece, Egypt and Israel. All claim drilling rights for hydrocarbon reserves in the Eastern Mediterranean and are acting in concert against Turkey. Turkey has raised the stakes, sending drill ships off the coast of Cyprus accompanied by naval vessels to protect them.

Greece has complained to the United Nations, calling the maritime deal with the GNA illegal and even booting the Libyan ambassador to Athens in response. Greece has the backing of its fellow EU members. The Brussels-based bloc has vowed to impose sanctions on Turkey if it doesn’t reverse course.

There are few signs it will.

“Libya’s internationally recognized government and the [self-declared] Turkish Republic of Northern Cyprus are Turkey’s only allies in the Eastern Mediterranean,” said Ozgur Unluhisarcikli, the Turkey director for the German Marshall Fund of the United States, a Washington DC-based think tank. “It's therefore not surprising that Turkey decided to seal this agreement with Sarraj.”

Detractors have spun the narrative of Ankara's backing for the GNA as one of an increasingly interventionist Turkey seized by neo-imperial ambitions and Muslim Brotherhood leanings. Analysts warn, however, that this reductionist take fails to convey the full picture.

Inga Kristina Trauthig, a research fellow at the International Center for the Study of Radicalization in London, told Al-Monitor, “A significant chunk of the war is playing out in propaganda, especially online. No Libyan force wants to be seen as dependent on foreign powers, but all forces have international connections, so it's important to work on countering and/or framing these connections.”

Trauthig continued, “Instead of being interpreted as a renewed military pledge, the latest [agreements between Turkey and the GNA] have quickly found their way into the toxic dominating narratives of the current civil war — in this case, that the GNA is a government propped by Turkey.”

In fact, Turkey initially opposed the 2011 NATO-led intervention that brought down Moammar Gadhafi and plunged the energy-rich country country into chaos. One reason was Turkey had $15 billion worth of outstanding contracts in Libya. Erdogan’s pious base also opposed Western military intervention against a fellow Muslim country. Erdogan had urged Gadhafi to step down and allow a peaceful transition. Turkey eventually fell in line behind the international coalition when it was clear Gadhafi's fate was sealed.

Some argue that the bigger risk in Turkey deepening its involvement in Libya is that it will butt heads with Moscow, as it did in the early days of the Syrian conflict.

While Russia formally disavows taking sides in Libya, it's an open secret that an army of Russian mercenaries called the Wagner Group is helping Hifter with Moscow’s tacit consent.

Kerim Has, a Moscow-based Turkish expert on Russian affairs, agrees that things could get sticky between Turkey and Russia in Libya, depending on how far the sides push their involvement in direct confrontation with the other.

Has told Al-Monitor, “Ankara’s stance in Libya is a clear portent of a new sphere of tension in Turkish-Russian relations. There are no signs that Russia supports the Turkey GNA deal. Quite the opposite. It's clearly disturbed by it, in particular with the articles pertaining to military cooperation.”

Moscow’s discomfort stems in part from its view that the Islamic State, Jabhat al-Nusra and other jihadi elements have joined the ranks of GNA forces, Has said. Moscow would rather do business with the more secular Hifter, who, in any case, would likely give Russia a healthy stake in the country’s energy sector, if he were to prevail.

That said, Has believes that while neither Ankara nor Moscow will switch sides in Libya, they will also avoid a dust-up because larger common interests are at stake. He said, “While efforts are underway for the activation of the [Russian-made] S-400 missiles, when talks have begun for the sale of Russian Su-35 jets to Turkey, when Russian gas from the Turk Stream pipeline [to Turkey] is about to flow, it's unlikely that either Moscow or Ankara would desire direct conflict in Libya.”