Ankara warns Hifter to lay off Turkish assets in Libya

Threats are escalating between Turkey and Libyan warlord Khalifa Hifter, and Moscow seems to be egging them on despite its calls for a ceasefire. 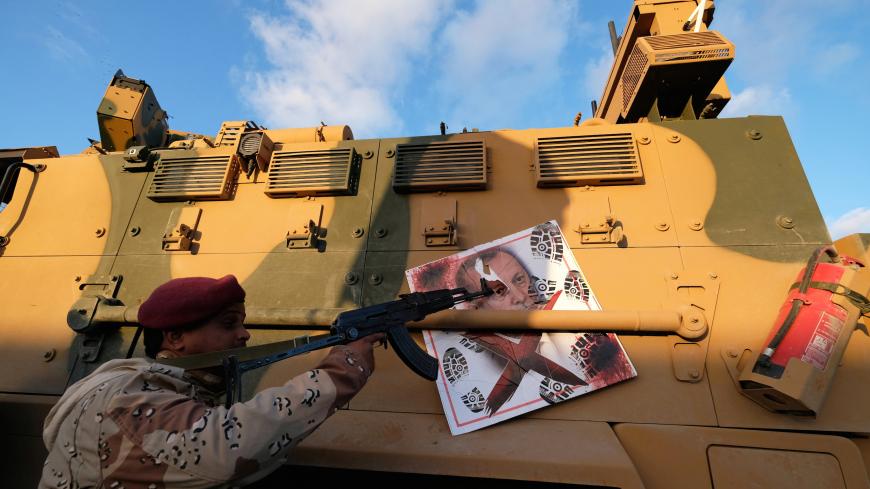 Turkey has warned of grave consequences if Libyan warlord Khalifa Hifter acts on threats to attack Turkish assets in Libya, signaling a further potential escalation in the Libyan conflict. Turkish Foreign Ministry spokesperson Hami Aksoy said in a statement today that Turkey would see “the putschist elements as legitimate targets” if its interests came under attack.

The warning followed threats from Hifter’s air force chief Saqr al-Jaroushi, who said, “All Turkish positions and interests in all cities are legitimate targets for our air force jets and we call on all civilians to stay away from them.”

The mutual chest-pounding came amid reports that several Soviet-era fighter jets had arrived from Russian bases in Syria to the east of the country controlled by the renegade dual-citizen Libyan-American general. “You are about to see the largest aerial campaign in Libyan history in the coming hours," Jaroushi claimed.

Aksoy said it was “noteworthy” that Jaroushi had delivered his threats “after new war planes are deployed in Libya’s east with foreign support.”

Bloomberg reported that at least six MiG 29s and two Sukhoi 24s had flown into the east from the Russian-controlled Hmeimim air base in Syria, escorted by two SU-35 Russian air force jets.

The deployment prompted fevered speculation that Russia has decided to redress the balance of Libya’s nine-year civil conflict in favor of Hifter.

Some analysts disparage the idea that Russia will risk a full-on confrontation with an increasingly combative Turkey. Rather said Emadeddin Badi, a senior fellow at the Atlantic Council, “What we are likely to see is once again a diplomatic rapprochement between Turkey and Russia that would be designed to shut all other powers out while Ankara and Moscow act as power brokers in western and eastern Libya, respectively.”

Today’s telephone call between Turkish Foreign Minister Mevlut Cavusoglu and his Russian counterpart Sergey Lavrov, in which the pair called for an immediate cease-fire in Libya and a resumption of UN talks to end the war, suggests that Badi’s assessment may be right. Turkey has long pushed for a cease-fire and its military intervention was calculated to level the playing field before negotiations start.

Ankara and its Government of National Accord (GNA) allies led by Fayez al-Sarraj received something of a boost from NATO’s Secretary General Jens Stoltenberg, who told Italy’s La Repubblica that Hifter and Sarraj could not be placed on the same level, as the latter headed the sole Libyan government recognized by the United Nations. “For this reason NATO is ready to support Tripoli,” he said.

The jousting between Ankara and Hifter came amid stark UN warnings about the deepening humanitarian crisis in Libya compounded by the COVID-19 pandemic. In an address to the UN Security Council yesterday, Stephanie Williams, the world body’s acting special representative for Libya, said the chronic violence had sharply increased humanitarian needs for the country’s civilian population, including 400,000 internally displaced Libyans and 654,000 migrants, refugees and asylum seekers. Williams said, “Just when we think that the bottom has been reached in Libya, we somehow manage to achieve new depths of violence, heartlessness and impunity” with a “massive influx of weaponry, equipment and mercenaries to the two sides.”

Turkey and Russia’s stab at brokering a cease-fire in Moscow on Jan. 13 failed as did a conference convened six days later in Berlin, in large part due to Hifter’s obduracy, as he believed he was winning the war.

But Hifter has suffered heavy setbacks in recent weeks as a result of Turkey’s escalating intervention on the side of Sarraj's internationally recognized GNA. Hifter is backed by Turkey’s regional foes Egypt and the UAE as well as by France and Russian mercenaries from the Wagner Group, whose owner is alleged to be close to the Kremlin. Moscow formally denies any connection to Wagner.

Either way they are betting on what increasingly looks like a losing horse.

Turkish Bayraktar drones have wrecked Hifter’s latest offensive started over a year ago to take Tripoli, destroying Russian-made Pantsir air systems as Turkish war ships patrol the waters around the capital. The GNA announced it had destroyed at least seven Pantsir S-1 and captured one other since May 17.

Over the past month the GNA has wrested a string of small towns linking Tripoli westward to the Tunisian border. In a major coup earlier this week, it captured al-Wattiya, the LNA’s sole air base within proximity of Tripoli.

Turkey's defense minister took credit for the gains, saying “the balance in Libya changed significantly” as a result of Turkish training.

The Turkish presence with at least 100 military officers and an unknown number of Syrian rebel proxies, thought to run into the thousands, rests on a pair of military and maritime accords signed in November between Ankara and the GNA. The agreements give Ankara legal cover for its overt intervention in the war.

“With the situation as it currently is, Turkey and Russia jointly have enough influence to alter the military landscape,” Badi told Al-Monitor.

“Whether they can turn this clout into a new political road map is uncertain, but they do have an incentive to try.” He continued, “Some sort of deal could be reached whereby Turkey would guarantee its maritime demarcation zone [in the Eastern Mediterranean] while Russia secures its business and economic interests — it wouldn’t be unwelcome by the factions in Western Libya.”

But others view Russia’s calculations somewhat differently. “The deployment of the [Russian fighter aircraft] along with other still unknown equipment that’s been delivered over the past few weeks is designed to try and wrest aerial superiority from Turkey,” said Tarek Megerisi, a policy fellow at the European Council on Foreign Relations. Megerisi told Al-Monitor, “In my opinion Russia is simply trying to keep the war going at a time when [Hifter] and [his army] look like they are on the brink of collapse. As Russia sees this as the vehicle it needs to continue entrenching, at least until they find a new Libyan to back.”

Megerisi contended that France would be quietly supportive of the Russian moves. “And I would bet dollars to doughnuts that the UAE played a central role orchestrating this with the Russians.” Both France and the UAE also opposed Turkey’s expanding military presence in northern Syria.

The stakes are high for foreign backers of oil-rich Libya’s warring factions, and especially so for cash-strapped Turkey. Ankara is keen to revive around $16 billion worth of contracts awarded to Turkish construction companies before the fall of Libyan dictator Moammar Gadhafi. Sarraj has pledged to honor the contracts.

A GNA victory would also lock in the maritime agreements that challenge Greece and Cyprus’ claims over the Eastern Mediterranean, which contains large reserves of natural gas. Tensions have escalated since last year, when Turkey sent drill ships accompanied by naval escorts to effectively torpedo Cyprus’ efforts to commercially exploit the gas.

But for any deal between the warring sides to hold up, Russia would have to constrain the UAE and Egypt “or channel their interventions into a political rather than military format,” argued Megerisi. For now, it remains unclear which way Russia will veer, though its dealings with Turkey in Syria suggest that it will pursue its strategy of simultaneously wielding both carrots and sticks.