Will Libya cheer up Erdogan?

Ill-calculated moves by rebel commander Khalifa Hifter have played into the hands of Turkey and its allies in the Libyan conflict, leading to the fall of a strategic air base in al-Wattiya; however, the situation is still volatile, and it is early to declare a victory. 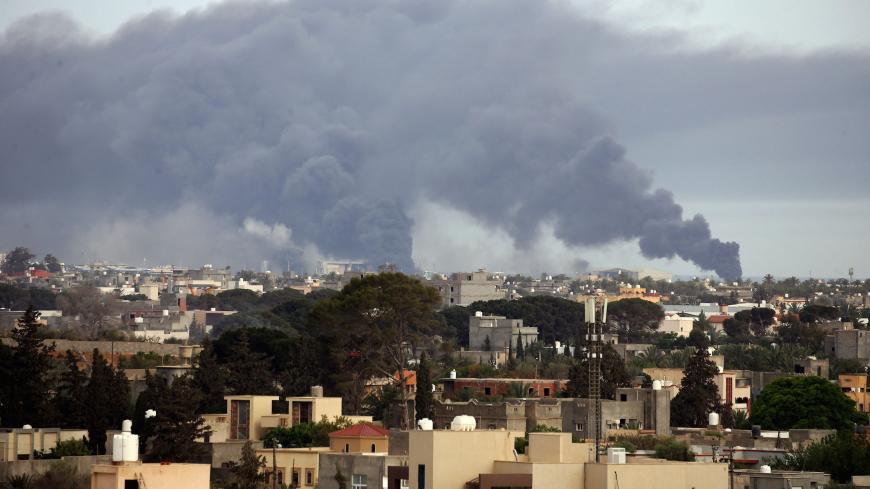 Smoke fumes rise above buildings in the Libyan capital, Tripoli, during reported shelling by strongman Khalifa Hifter's forces, on May 9, 2020. - MAHMUD TURKIA/AFP via Getty Images

Turkey’s intervention in Libya, marked heavily by the use of drones, has helped its allies change the balance on the battlefield while fanning tensions with Egypt and the United Arab Emirates, the main backers of the opposite side, and sharpening international polarization in the region.

Over the past several weeks, the forces of the Tripoli-based Government of National Accord, aided by Turkish military coordination and drones, have reversed many of the losses they suffered against Khalifa Hifter’s Libyan National Army in late March. In an offensive called Operation Peace Storm, the Tripoli forces had tried to seize the strategic al-Wattiya air base southwest of Tripoli, but the March 25-26 thrust failed, leading to the loss of a stretch of the coastline all the way to the Tunisian frontier.

Yet in the first two weeks of May, the Tripoli government’s forces conducted at least 57 airstrikes on al-Wattiya in a renewed effort to capture the key base and stepped up attacks on Hifter forces stationed in Tarhuna, not far from Tripoli. On May 18, the base finally fell to the Tripoli government’s forces. Observers in Tripoli believe the fall of al-Wattiya will relieve pressure on the capital and end Hifter’s dreams of extending his control to the whole of Libya.

The turn of the tide has led observers to speculate that “Turkey’s friends are winning” or that Turkey’s strategy has left Hifter on the defensive. Meanwhile, Egypt, the UAE, Greece, Cyprus and France issued a joint statement May 11, accusing Turkey of fanning tensions and instability in the region, including in Libya and the eastern Mediterranean, where rivalry over gas resources continues to simmer.

Ankara responded in kind, accusing the quintet of “sacrificing the democratic aspirations of the peoples to the callous aggression of putschist dictators.” It singled out France for “attempting to be the patron of this axis of malice” because Turkey had foiled French plans “to establish a state of terror in Syria” — a reference to France’s support for Syrian Kurds. Turkish Foreign Minister Mevlut Cavusoglu, meanwhile, lashed out at the UAE for “fanning chaos in the region,” slamming Abu Dhabi not only for backing Hifter but also for “supporting the al-Shabab terrorist group in Somalia” and “seeking to divide Yemen.”

The war of words was preceded by attacks on central Tripoli, in which shells landed near the Turkish Embassy. In a May 10 statement, Ankara warned that it “will consider Hifter’s elements as legitimate targets in case they target our diplomatic missions and interests in Libya.” While Hifter’s forces denied responsibility for the attacks, Ankara’s warning raised the specter of Turkish F-16 warplanes taking to the stage in Libya on the grounds of self-defense, regardless of who the perpetrators are.

Turkey’s intervention in Libya has become increasingly intertwined with its energy ambitions in the eastern Mediterranean after its signing of a maritime demarcation deal with the Government of National Accord, led by Fayez al-Sarraj, in November. This has fueled the conflict in Libya. President Recep Tayyip Erdogan secured parliamentary approval for a military deployment in Libya in January and, while stepping back from deploying combat forces, he has pursued a four-pronged strategy involving the following:

According to the Al Arabiya network, Turkey’s intelligence chief Hakan Fidan traveled to Libya in early May to assess the situation on the ground after Turkish special forces began deploying in Tripoli in late April.

Also, the number of fighters transferred from Syria has increased. According to the Syrian Observatory for Human Rights, 8,700 fighters, including non-Syrians, had reached Libya as of May 14, in addition to 3,550 others being trained in Turkey. The mercenaries have lost 287 men in Libya, the report said, while claiming that Turkish-backed Syrian factions have recruited about 150 minors to fight in Libya.

Turkey also succeeded in using Tunisia as a route for shipments to Libya, stirring the political pot in the North African country, which has sought to stay impartial in the conflict next door. The Tunisian presidency said last week that it allowed a Turkish aircraft carrying medical supplies for Libya to land in Tunisia, provided that the shipment was conveyed to Libyan authorities through Tunisian security officials. A group of Tunisian political parties denounced the permission, rejecting “any attempt at dragging Tunisia in the game of regional alliances.”

Hifter had upped the stakes April 27, declaring himself the sole leader of Libya and rejecting the 2015 Skhirat Agreement, a UN-mediated deal to unite the country, which was never fully implemented. After suffering setbacks on the battlefield, his forces launched Operation Ababil Birds on May 6 in a bid to capture the capital, a goal that has eluded them since an ambitious but failed push in April 2019. They have reportedly achieved some progress in areas south of Tripoli.

Fathi Bashagha, the interior minister of the Tripoli government, conceded May 13 that government troops had yet to repel Hifter’s ground forces despite the government's air supremacy thanks to Turkey’s support. Also, the Hifter side seemed to be balancing the militia score, with about 2,000 Syrian fighters reportedly sent to Libya with Russian help, in addition to up to 1,200 mercenaries from the Russian Wagner group who were already assisting Hifter.

In sum, the battlefield remains dynamic and in a state of flux, far from promising a decisive victory to either side. The stalemate around Tripoli continues.

In the international arena, however, Hifter has generated headwinds over his unilateral claim at power, which also boils down to a snub of his allies in the Tobruk-based House of Representatives, and the civilian casualties that the attacks on Tripoli have claimed.

In this context, NATO Secretary-General Jens Stoltenberg’s remarks to the Italian daily La Repubblica could be seen as a boost for Erdogan. In an interview published May 14, Stoltenberg said all parties in Libya should observe the UN arms embargo, but added, “This does not mean, however, putting the Hifter-led forces and the government of Fayez al-Sarraj, the only one recognized by the United Nations, on the same level. For this reason, NATO is ready to support the Tripoli government.”

Yet Turkey’s confrontation with fellow NATO members Greece and France precludes any NATO intervention in Libya after Turkey’s own heart. Similarly, Russia is unlikely to abandon its dual strategy of maintaining support for Hifter via the Wagner group and engaging with Sarraj diplomatically.

The new balance of power could perhaps force the parties to return to the framework agreed upon at the Berlin conference in January, which calls for a negotiated settlement through talks in various committees. Also, the Tobruk-based parliament and government could grow more willing for a dialogue with Tripoli after Hifter’s snub. Such an eventuality could allow Erdogan to claim once again that he has “foiled the game” of his opponents.