Are Russia and Turkey in tug of war over Libya?

Libya has emerged as a contested issue between Russia and Turkey. 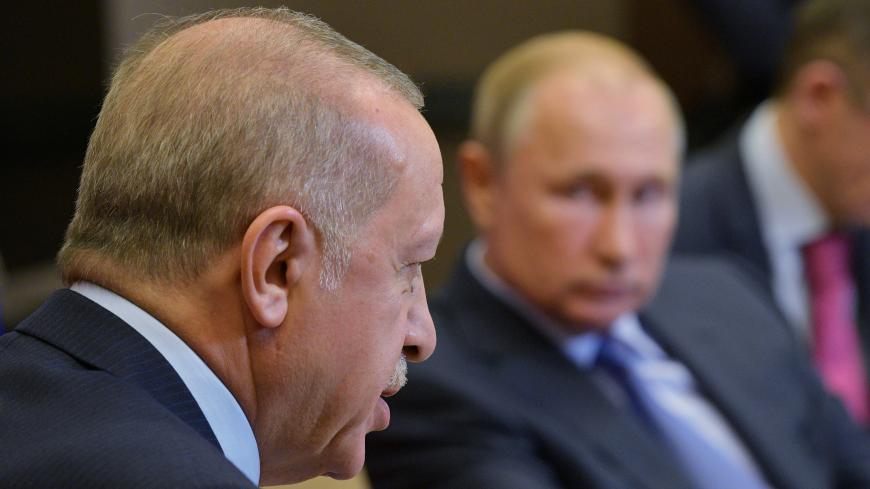 Russian President Vladimir Putin and his Turkish counterpart Recep Tayyip Erdogan discussed the situation in Syria and Libya in a Dec. 11 phone call. The Turkish side initiated the conversation to address the countries' emerging differences over Libya that the two were trying to patch up. A few days earlier, Erdogan had declared his readiness to dispatch soldiers to Libya.

“There is a security company from Russia [in Libya] called Wagner," Erdogan said. "This company sent its security staff there. On the issue of sending soldiers … if Libya makes such a request from us, we can send our personnel there, especially after striking the military security agreement.”

Erdogan and the head of Libya's Government of National Accord, or GNA, Fayez al-Sarraj, signed memorandums Nov. 27 on maritime boundaries and security cooperation, prompting unease in Moscow. Russian Foreign Ministry spokeswoman Maria Zakharova stressed that the memorandums “could disrupt preparations for an international meeting on a Libyan settlement scheduled to be held in Berlin later this year.”

Such a stance in Moscow signals concern that Turkey’s military support for the Tripoli-based government may wreck the attempts of Khalifa Hifter’s allies, including Russia, to bolster Hifter's standing ahead of the Berlin talks.

Despite Russia's efforts to adhere to the “principle of equidistance with all players” on the ground, it seeks to buttress Hifter and his supporters in the Libyan war. The Kremlin expects Hifter, the commander of the Libyan National Army (LNA), and his backers to have the final say in post-war Libya, albeit while maintaining a balance of power and even, perhaps, keeping Hifter’s opponents on as legitimate political forces. However, Ankara’s greater military contribution to Tripoli complicates the scenario, and Hifter himself still lacks international legitimacy following his failure to impose a military settlement on the Libyan conflict.

At the same time, Moscow is hedging its bets by maintaining ties with Tripoli, in particular through contracts that Russian oil and gas companies signed with Libya’s National Oil Corporation in December. Russia’s Tatneft will conduct oil exploration in a contested area in the Ghadames Basin, which borders areas controlled by both the LNA and GNA. This contract reflects Russia’s desire to preserve relations with both warring parties, for the operations here are impossible without security guarantees from both sides. Another company, the Gazprom-affiliated Wintershall, which is based in Germany, will explore oil in the Sirte Basin, which is largely under GNA control. For this operation, the National Oil Corporation and Wintershall agreed to establish a joint venture, al-Sirir Petroleum Operations Company.

In turn, the Erdogan-Sarraj memorandums, especially the one on maritime borders, testify to a long-term partnership between Ankara and Tripoli. The agreements, which clear the way for Turkey to secure oil shale deposits in the Mediterranean Sea, depend on the GNA, or its loyal successors, being in power. Ankara will therefore continue to stand by Sarraj's government.

One should take Erdogan’s statements about sending troops to Libya seriously. The Turkish leader has already honored previous promises to help Sarraj. Shortly after Erdogan pledged in late April to use all his country's "capabilities to prevent the conspiracy against the Libyan people," the Amazon Giurgiulesti ship arrived in Tripoli from the Turkish port of Samsun, loaded with Kirpi II 4×4 armored personnel carriers and several Vuran vehicles for the GNA-loyal army. Ankara did not conceal the transfer of these weapons, which defy UN sanctions. Around the same time, Turkey also supplied its Bayraktar combat drone to the GNA army.

Back then, Ankara’s assistance allowed Hifter’s adversaries to act more aggressively and take over the city of Gharyan, the LNA's main rear base, from Hifter's backers. Now that Russian private military companies allegedly operate in Libya backing Hifter, Turkey seeks to step up its own aid to Tripoli, all of which could dramatically tilt the balance of power.

Though the presence of Russian mercenaries and military personnel in Libya and their assistance to Hifter are beyond doubt, the role of those mercenaries in operations near Tripoli seem grossly exaggerated, which LNA officials themselves confirm.

The circumstances of Russia's military presence in Libya have yet to be clarified. Contradictory news reports occasionally surface regarding the activities of Russian mercenaries and military in support of Hifter.

Some reports suggest that the presence of Russian mercenaries and advisers has materially improved the performance of LNA snipers as well as the mortar and artillery. However, in a televised interview with Emirati al-Aan, a person presented as a wounded Russian mercenary said he largely stayed in Benghazi and only occasionally went to Tripoli. However, he was primarily tasked with training Libyan fighters to operate in urban terrain.

Most of the LNA’s assistance, however, must still be rendered by the United Arab Emirates, Egypt and Jordan, while Russia does not appear capable of securing Hifter's triumph in the fight for Tripoli.

Instead of sending its military, Turkey could deploy its own private military companies to Libya, first and foremost SADAT. Remarks from Russian Foreign Minister Sergey Lavrov on “the increasing number of Syrian fighters from Idlib seen on the ground" in Libya may suggest that SADAT fighters are already operating in Libya. Turkish private military companies may have even engaged Syrians for Ankara’s foreign ventures. If that is indeed the case, Turkey would be the only party capable of facilitating such a deployment to Libya. Thus, the threat of a direct clash between Russian and Turkish mercenaries, if not their respective militaries, looms in Libya.

Eventually the Libyan dossier may enter into Russia and Turkey's current deals regarding Idlib and northeastern Syria. This is why Russian aid to Hifter can be seen as another way for it to exert pressure on Ankara. However, the consolidation of Hifter's position ahead of the conference on Libya also plays into Moscow’s hands, to a large extent. Moreover, one cannot ignore Russia’s possible “packaged” agreements with the UAE, which include both the Libyan and Syrian issues. For instance, Moscow has provided Hifter — an Emirates ally — with more fervent assistance in exchange for the UAE backing the restoration of the Syrian regime's legitimacy.

by Murielle KASPRZAK and Joseph SCHMID | AFP | May 26, 2022
END_OF_DOCUMENT_TOKEN_TO_BE_REPLACED