How serious is Russia's commitment to Libya settlement?

Now that recent talks to unite Libya's rival governments have failed, observers are evaluating the extent of Moscow's investment in peaceful reconciliation. 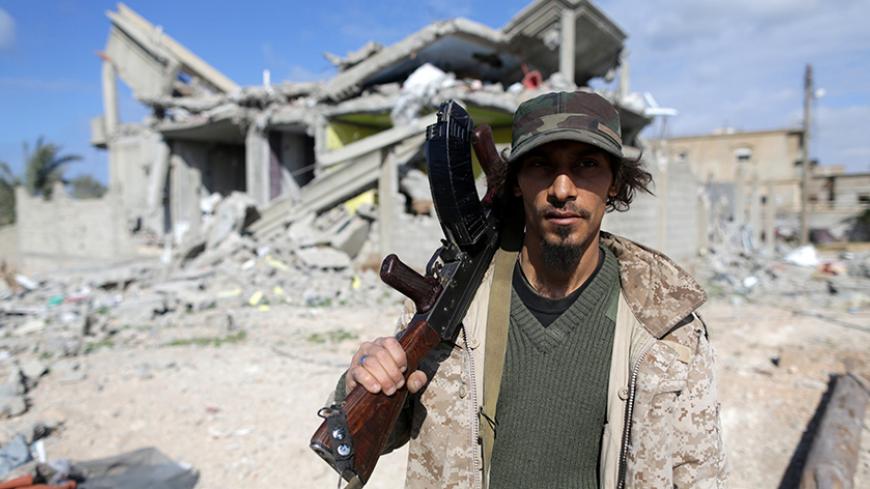 A member of east Libyan forces holds his weapon as he stands in front of a destroyed house in Benghazi, Libya, Jan. 28, 2017. - REUTERS/Esam Omran Al-Fetori

A rare attempt to broker a deal last week in Cairo between the rival governments of Libyan Prime Minister Fayez al-Sarraj and Gen. Khalifa Hifter generated a lot of speculation, although the talks failed.

Delegations representing Sarraj's UN-backed Government of National Accord (GNA) in Tripoli, and governing bodies supporting Hifter in Tobruk, arrived in Egypt for a number of meetings, including what had promised to be the first face-to-face encounter between the two leaders in their present capacities. The talks were organized and facilitated by the Egyptian government, and were set to be chaired by Egyptian President Abdel Fattah al-Sisi himself.

It is widely believed that bridging the gap between Sarraj and Hifter is the key to national reconciliation for Libya, which has been torn by civil war since Moammar Gadhafi was overthrown in 2011.

Hifter, emboldened by his expanding influence in Libya, reportedly rejected a power-sharing deal pitched by Sarraj. Under that proposal, the renegade general would become one of the official commanders of the Libyan military, although the role of commander in chief would be split among representatives of several political factions. To Hifter, Sarraj's proposal does not match the realities on the ground, where Hifter's Libyan National Army and loyal forces control between 50% and (according to Hifter's estimate) 95% of the country.

Following the failed talks, the general told an Egyptian TV channel that his army comprises 60,000 skilled servicemen, including many trained in urban combat — a statement that was surely designed to up the ante for Sarraj.

Egypt and Moscow have been backing Hifter's political ambitions in Libya and both did their share of lobbying to make the Cairo meeting happen. But, given how much leverage Russian diplomats have with the Tobruk government, the failed talks bring into question Moscow's real commitment to a peaceful settlement of the Libyan crisis. It also remains unclear to what extent Russia's and Hifter's interests are aligned at the moment, if the Libyan leader disregards his ally's recommendations.

The UN-brokered Libyan Political Agreement is the crucial element of national reconciliation in Libya, but Hifter and Moscow also see it as the main obstacle. The agreement rejects Hifter's ambition to be the sole commander of the Libyan National Army. Per the document, a nine-person Presidential Council should "assume the functions of the supreme commander of the Libyan army."

That is not acceptable to Moscow, let alone Hifter. To Russia, sharing military responsibilities would open the door for potential infighting. Instead, Russia would prefer to have all defense activities centralized under the country's leader — essentially another Gadhafi-type rule.

The amended agreement proposed by the Tripoli government (Sarraj) to the Tobruk (Hifter) delegation in Cairo stipulated that the functions of the commander in chief would be divided among the head of the House of Representatives, the head of the State Council (a quasi-Senate) and Sarraj himself — eliminating Hifter from the decision-making process. Given his increasing power in Libya and his strengthening profile internationally, Hifter is unlikely to accept what he sees as a blunt attempt to strip him of his main means of projecting power.

Despite unconfirmed reports that Moscow signed an arms-supply agreement with Hifter after his surprise January meeting with Russian military officials on board the Admiral Kuznetsov aircraft carrier — which would be the strongest show of support to date — Moscow is fully committed to restrictions imposed on Libya in 2011. Russia has so far been maneuvering within the UN-established framework and does not seem to feel any urgency to provide its ally with weapons just yet. As long as the United Arab Emirates and Egypt are willing to prop up the Libyan National Army through cross-border deliveries of military hardware, Russia does not need to intervene. In fact, Moscow may feel relieved that the UN-imposed arms embargo is still in place, because otherwise it would need to consider Hifter's numerous requests for military aid, potentially diverting to Libya some of the forces intended for Syria. It's not clear whether the Kremlin is ready to support Hifter militarily, but that scenario would certainly be a test for the relationship.

While Moscow presently sticks to the rules of the game in Libya, it is profoundly skeptical about the Libyan Political Agreement and international efforts chiefly led by Martin Kobler, the UN envoy to Libya. In late December, Russian Deputy Foreign Minister Gennady Gatilov delivered what appears to be Moscow's harshest criticism of Kobler's work so far. Gatilov said Kobler's backing of the Tripoli government in its confrontation with Hifter stalls the reconciliation process. Gatilov described Kobler's policies as "efforts to strike separate deals with part of the Libyan political establishment behind the back of other influential players." Hifter follows the same line and simply does not recognize the envoy's refusal to meet with him.

Antonio Guterres became UN secretary-general in January, and changes are expected on the Libyan front. Kobler's contract runs out in the first half of 2017, and the UN will have to pick his replacement by then. Guterres wanted to replace Kobler with former Palestinian Prime Minister Salam Fayyad, but new US ambassador to the UN Nikki Haley blocked the move. Russia, however, strongly backs Fayyad's candidacy, since the Russian Foreign Ministry, including Foreign Minister Sergey Lavrov, knows him well from his days as the Palestinian prime minister. It remains to be seen whether Guterres will battle the UN bureaucracy to appoint Fayyad, but Russia is unlikely to push for any serious reconciliation until Kobler is replaced.

In a separate development, Russia's oil giant Rosneft signed an investment and crude-purchasing agreement this month with Libya's National Oil Corp. (NOC), indicating revived interest in doing business in the North African country despite the ongoing crisis. Hifter controls the bulk of Libya's oil resources and after his gains in September, when his forces seized control of most of Libya's oil crescent ports, oil can once again be shipped out of the largest terminal in Libya's port of Sidra.

The NOC maintains a very careful balance between the two governments in Libya. The company's head has defended NOC's separation from politics, arguing that the company is a vital element of the Libyan economy, which is in ruins. As a result of the Libyan National Army's gains, oil production surged in the country, from 300,000 barrels a day in September to more than 700,000 barrels in January. This dynamic is attractive enough for international business to take its first steps to return. Other Russian companies are equally eager to explore opportunities in Libya and recover some of the profits lost on deals signed with the Gadhafi government — which signals Russia is in fact invested in a peaceful resolution of the conflict; otherwise large business deals would be out of question for the time being.