Now that the UN and the Tobruk-based government of Libya have endorsed a new agreement to form a united government, the latter must juggle conflicting priorities both inside and outside the war-torn country. 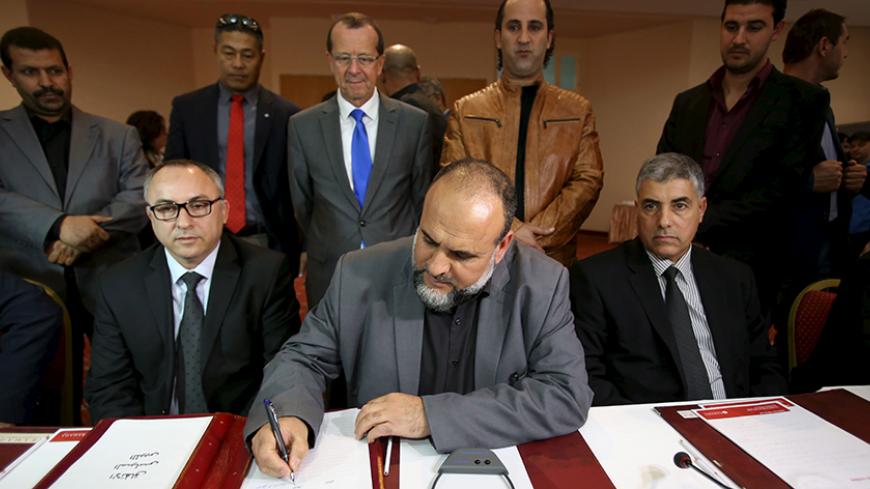 According to UN envoy to Libya Martin Kobler, Libya will have one government by the end of January 2016, and it will be in Tripoli. Despite the difficulties facing it, the new government of national accord has already won major international approval. On Dec. 23, the UN Security Council adopted Resolution 2259, recognizing it as the sole legitimate government of the war-torn country.

Bernardino Leon, the former UN envoy to Libya, spent nearly 14 months in difficult negotiations starting September 2014, when he first took up the job. Since August 2014, when the capital was overrun by a coalition of Islamist militias forcing the elected government to flee to Tobruk, Libya has had two quarreling parliaments and two opposing governments. They have accepted a political agreement signed in Skhirat, Morocco, on Dec. 17, 2015.

However, the Tobruk-based parliament speaker refused to endorse the political agreement and the government it produced until Jan. 1, after his meeting with Kobler, under international pressure.

But the UN envoy was less fortunate in Tripoli, where he met the speaker of the General National Congress, Nouri Abu Sahmain, who refused to endorse the new government.

In any case, the international community seems to be determined this time to impose its will on Libya’s disagreeable politicians. Indeed, the UN Security Council endorsed the new government before it was voted on by Libya’s elected parliament. The UN appears more concerned with establishing the government than what will happen afterward.

Many regional countries, including Libya’s neighbors, have also welcomed the new government, headed by architect-turned-politician Fayez Sarraj. Jordan, Egypt, Spain and Tunisia have all welcomed this development and promised support.

Yet it remains unclear how this government will operate in Tripoli — if it ever gets there — and what its priorities will be toward its citizens and the international community. The capital, Tripoli, is under the control of the self-proclaimed government since it was overrun in August 2014 by a coalition of Islamist militias, which currently occupy all government buildings.

During his visit to Tripoli, Kobler, along with his military adviser, Lt. Gen. Paolo Serra, met with some militia leaders in an effort to secure their support for the new government, but it is unclear if any such commitments were made.

If Sarraj’s government ever makes it to Tripoli, it will face two conflicting sets of priorities.

For world powers, particularly the five permanent members of the UN Security Council and European Union countries, the most urgent priority is to have one government in Libya able to command one united force able to fight the Islamic State (IS). The terror group has been quietly expanding in Libya after it took over Sirte on the coast. Each of the two governments is now backed by different militias. The aim is to have both sides unite their military capabilities to fight a common enemy.

IS has, for the first time, publicly declared its presence in Sabratha just 60 kilometers (37 miles) west of Tripoli. On Dec. 9, IS paraded its fighters in some 30 cars around the city center as a display of force. Given the proximity of Libya to the southern EU shores and in light of the November Paris attacks, EU members are extremely worried that Sirte poses an immediate danger and could serve as a launching point for future terror attacks.

The second priority for Western powers, regional countries and the UN is for the new united government to play a more active role in reducing the flow of migrants from Libya to Europe over the Mediterranean Sea. The Libyan route has been a favorite for smugglers, and over 3,700 migrants drowned last year while making the dangerous trip to Europe via Libya. An estimated more than 200,000 have made it to Europe after taking small boats from Libya. How the new government can be effective in meeting these two obligations has yet to be seen.

However, ordinary Libyans have a different set of priorities and expectations from the new government. For them, migrants flocking to Europe and the war on IS are not as important as safety in their neighborhoods or finding work. They would like to enjoy some stability in their daily lives and be able to go about their business without worrying about being randomly jailed, kidnapped or shot at. They want the new government to tackle matters of daily concerns such as the skyrocketing prices, lack of cash in the banking system and timely payment of government salaries. They yearn for a decent medical system in which public hospitals can offer free, quality services, as they did before Libya plunged into its current state of chaos nearly five years ago.

Many Libyan media outlets have been airing comments by ordinary citizens across the country expressing their support for the proposed government, but they're doing so only out of despair and a lack of any viable alternative. There is a general feeling that this government is more concerned about what the outside world wants and less about what Libyans want.

Libyans would like to see the national reconciliation issue, so far neglected, be taken seriously by this new government and treated with urgency. More than a million Libyans are displaced inside and outside the country and hope to return home to a relatively safe environment. Tawergha, a town of over 40,000 people east of Tripoli, was destroyed by militias from neighboring Misrata after they accused the entire town of backing the former regime in 2011. The residents were forced to flee and live in refugee camps scattered all over Libya. For them, to return home is their ultimate wish. While in Tripoli, Kobler visited one such camp and had a firsthand experience of the miserable life those Libyans are forced to live.

It will be a very difficult task for the new government to balance its domestic obligations with its international responsibilities. However, it has no choice but to face these conflicting sets of priorities head on, or it will meet the same fate as the four previous Libyan governments since the war in 2011. They came and went after wasting billions of dollars of public money, and little was done to improve the lives of ordinary citizens, let alone restore peace and social harmony.