One year on, Libya's unity accord needs more work

The Libyan Political Accord signed last year in Morocco between Libya’s rival political factions has proven imperfect, but to maintain what progress has been made, any renegotiations must be partial. 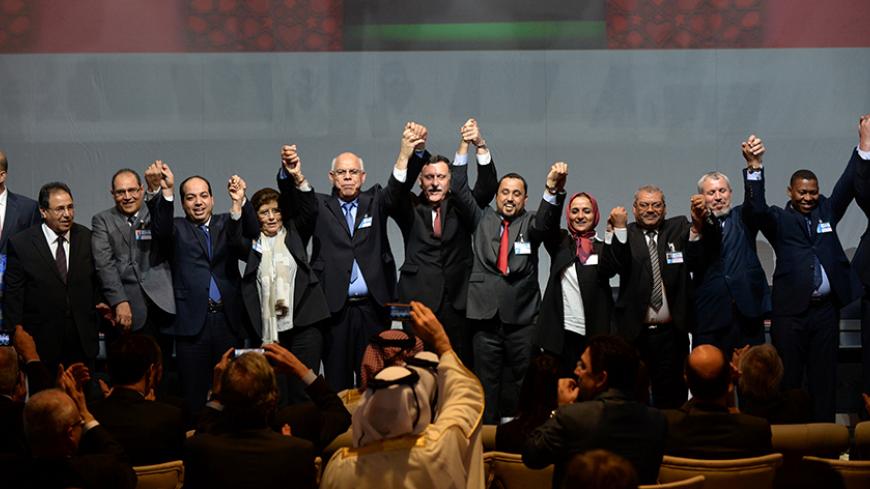 The first anniversary of the Libyan Political Accord (LPA) fell on Dec. 17. The agreement was signed in Skhirat, Morocco, by the fighting Libyan political factions in front of a cheering crowd of diplomats and international dignitaries representing major world powers including the United States, European Union and dozens of regional countries. The LPA set up the Presidency Council headed by Fayez al-Sarraj as a first step toward a Government of National Accord (GNA) to be voted on by the Tobruk-based parliament.

The LPA — brokered by the United Nations after long and difficult negotiations between Libya’s two quarreling governments — might not be perfect, but it was the best possible way to address the country’s crisis, which has gone on for too long.

To assess what has been achieved so far, it may be best to start with the grim picture painted by the UN special envoy to Libya and the head of its mission in the country, Martin Kobler, before the UN Security Council meeting on Dec. 6. He hinted at the possibility of renegotiating the LPA, which he said is “not set in stone.” He went on to say that the accord “stands firm, but stuck,” reaffirming a wider belief that “it is the only workable framework” to salvage what is left of Libya.

However, since its establishment in Tripoli on March 30, the GNA’s biggest failure may be the lack of public support among the people it is supposed to serve, despite the wide international support. The UN and other major powers recognized the GNA as the only legitimate government in Libya and expected it to combat illegal migration from Libyan shores to Europe and fight the Islamic State (IS), which was already entrenched in Sirte on the Libyan coast. Eager to maintain such international support, the GNA found itself compelled to concentrate more on meeting those two expectations than on alleviating the difficulties Libyans face in their daily lives.

This failure to balance domestic and international expectations pushed the GNA to focus less on national reconciliation, unifying the country and improving the lives of its people as most urgent priorities. Indeed, forces claiming loyalty to the GNA claimed victory over IS when they ejected the terror group from Sirte on Dec. 6. But in reality, those who fought were not a disciplined, organized army commanded by the GNA, but rather a local Misratan militia over which the GNA has nominal control. On April 2, they declared their loyalty to the GNA in order to legitimize themselves as a regular military force fighting for the country’s internationally recognized government.

Economically, the GNA has failed even more miserably. The only recent economic achievement has been the liberation of the oil-exporting terminals in the middle of the country. But the terminals were liberated on Sept. 11 by the Libyan Armed Forces led by Gen. Khalifa Hifter and loyal to the Tobruk-based government. Hifter himself does not even recognize the GNA.

Consumer prices, measured by the exchange rate of the Libyan dinar against the dollar in the black market, has increased from 2.5 dinars to the dollar to about 6.5 in one year, pushing prices beyond reach of the average Libyan family. Furthermore, Libya’s banking system has been struggling with chronic lack of liquidity, making it very hard for people to access their savings in an economy where everything is paid for in cash.

On the security level, the GNA has failed to secure the capital, let alone the rest of the country. Security in Tripoli has deteriorated over the past year. The recent fighting in the capital on Dec. 2 — the fiercest since 2014, when a total war resulted in the mass displacement of families, destruction of the airport and burning of the city’s oil depots — only shows how local armed militias are free to do whatever they like with total impunity and before the GNA’s very eyes.

In Sabha, southern Libya, an incident involving a pet monkey triggered 10 days of intense fighting that killed and injured dozens of innocent people, causing huge damage to houses and schools. The military forces loyal to the GNA were powerless to end the bloodshed.

After a year of compounded failures, to question the LPA might not be the best policy, but renegotiating some of it could well be the only available option in the absence of any successful dialogue among Libyans. However, renegotiating the whole package would only open a Pandora's box.

But parts of the LPA must be renegotiated without delay, particularly the setup of the GNA itself and the future role of the Libyan Armed Forces’ chief of staff, who has been the most serious hurdle. Hifter has been successful in combating terror in eastern Libya, liberated the oil terminals and handed them over to the National Oil Corporation, and brought relative security to Benghazi and beyond. Above all, he enjoys wide public support, particularly in eastern Libya. Dismissing him outright would not help bring peace to the country, and giving him a blank check could have long-term consequences. However, bringing him into the fold through a compromise with the Tobruk parliament that is backing him would certainly hasten the settlement of the chaos in the country.

Practically speaking, the GNA does not have any serious disagreements with Hifter, but the GNA-supporting militias hate the man, primarily because a unified strong Libyan army will mean their days are numbered. The supply of arms to different militias in Libya by regional countries like Qatar, Turkey and Sudan is another major issue. Those countries should be forced to stop interfering in Libya’s domestic affairs and stop supplying arms to the warring sides in the country. Kobler said, “Weapons do not fall from the sky. They come by land or sea,” calling on the world community to respect the arms embargo imposed on Libya since 2011.