Although neither yet recognizes the other’s legitimacy, Libya’s military strongman Khalifa Hifter and Fayez al-Sarraj, the prime minister of the Tripoli-based government, agreed during a meeting in France to hold elections in a bid to end the country's conflict. 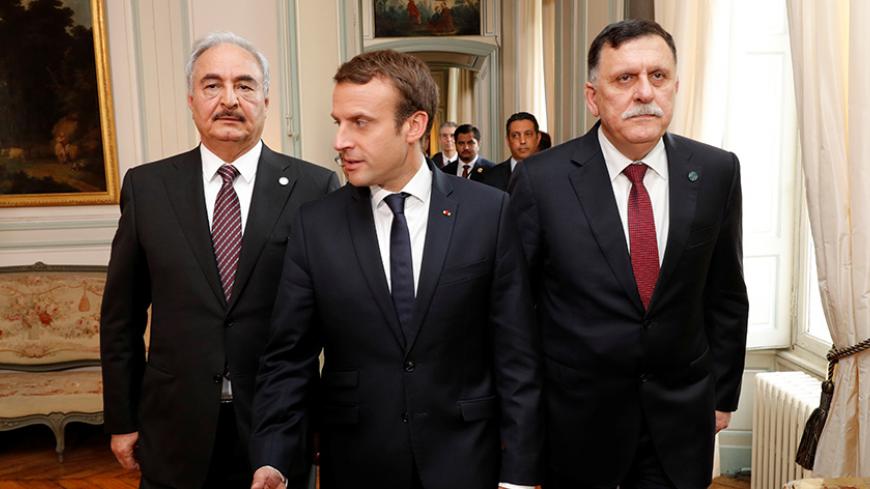 Libya's opposing factions appear to have made progress toward resolving their country's three-year civil war.

In their previous meeting May 2 in Abu Dhabi, the leaders failed to reach any tangible results and the meeting ended without a joint statement.

Based on their joint statement and respective press interviews, it appears they reached agreements on certain issues this time. The meeting was held in La Celle-Saint-Cloud, a western suburb of Paris.

French Foreign Minister Jean-Yves Le Drian played a vital role in bringing about the meeting, capitalizing on his good relations with Hifter, as Le Drian was defense minister under former Socialist President Francois Hollande and supported Hifter’s war against terror groups in eastern Libya, including the Islamic State (IS).

So what exactly was agreed to in France, and what are the chances any agreements will be implemented to bring about a political settlement in Libya — one that would unify its army and public institutions and lead to elections?

Hifter and Sarraj have agreed to a cease-fire across Libya, except in the so-called war on terror. This is a preventive measure since neither Hifter’s forces nor Sarraj’s loyal groups are currently engaged in any military activities against each other. But both parties seem to want to ensure that neither side resorts to force unless under extreme circumstances. Right after the Abu Dhabi meeting in May, an air base under LNA control was attacked in a surprise move by armed militias claiming loyalty to Sarraj, killing over 140 civilians and soldiers.

Another important issue agreed to in Paris was that national elections should be held as soon as is feasible, possibly next spring. Elections are not a straightforward process in Libya. The country remains divided between the two governments, neither of which is in full control of its turf. This makes it difficult to have fair and secure elections across Libya.

In particular, western Libya — where armed groups are nominally loyal to the GNA — is difficult to secure. In eastern Libya, Hifter's forces might be able to deliver security during elections, but this also is not an easy task since Derna in northeastern Benghazi, for example, is still controlled by different terror groups, including IS.

Another issue that might impede elections is logistics. The national election commission would need to have ballot boxes and administrative issues sorted out by spring. Even if this can be arranged somehow, the issue of constitutionality remains.

The country currently has no constitution, and its Constitutional Assembly has been deadlocked over drafting a new one for three years. One sticking point seems to be that minorities, including the Tebu and Amazigh (Berber), say the proposal does not grant them adequate rights. Add to that the Libyan Political Accord (LPA) signed in December 2015, which gave rise to the Government of National Accord but has yet to be passed by the Tobruk-based parliament. The meeting in France stressed that the LPA is the basic legal framework on which any future political settlement is to be built. As it stands now, the LPA does not enjoy a consensus among different protagonists, particularly Hifter, who sees it as a threat to his future role.

To say the meeting was a success is too optimistic, though it was not a complete failure. Both sides, as well as the French government, repeatedly affirmed their commitment to see the process through and confirmed that failure is not an option.

Hifter also moved one step closer to being the dominant negotiator representing eastern Libya, at least for any interim talks expected to take place within Libya and with the new United Nations envoy Ghassan Salame. After being invited by a world power like France and accepted as a legitimate commander of regular armed forces, Hifter will certainly be at least the contact person for France and the wider European Union for any future compromises. After all, France played a leading military role in deposing Moammar Gadhafi's regime in 2011 and worked very hard to get the UN Security Council to pass a series of resolutions against his regime, ultimately authorizing the use of force.

Now it becomes Salame's role to oversee how to bring about wider support for the meeting's results. He also has the difficult task of amending the LPA without renegotiating the entire document. Salame knows that he cannot overlook Hifter any longer, as previous envoys did. Salame attended the meeting in France and saw firsthand Hifter's influence.