Libya’s military strongman, Khalifa Hifter, announced his support for UN-backed elections in the country in a surprising move that could see Hifter and his supporters sweep up power. 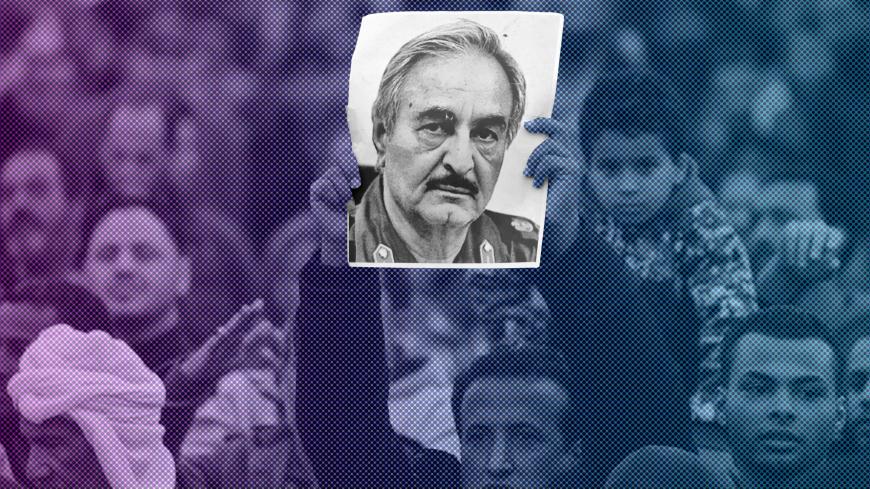 A man holds a poster of eastern Libyan military commander Khalifa Hifter during a rally demanding Hifter take power, after a UN deal for a political solution missed what his supporters said was a self-imposed deadline, Benghazi, Libya, Dec. 17, 2017. - REUTERS/Esam Omran Al-Fetori

In a surprising move, Gen. Khalifa Hifter, Libya’s eastern military strongman, announced his acceptance of elections in Libya as a way out of the political deadlock in the war-ravaged country. Spokesman Brig. Gen. Ahmed al-Mesmari announced the decision in a news conference Dec. 27.

However, Mesmari said his boss agreed to the elections only if they are organized under “United Nations and Arab League supervision,” while calling on the country’s parliament to pass a new electoral law within “reasonable time.” Both conditions are likely to be met since the United Nations is in charge of the whole political process in the country and the current election law is likely to be amended because different political groups and a large number of the general public reject it given its unclarity and its favoring of independent contestants over political parties. The current election law also does not exempt holders of dual nationality citizens from running in elections, which directly violates Libya’s current citizenship law.

This sudden but significant development raises the following question: What made Hifter change his mind and how important it is for the UN-proposed elections, due sometime in the spring, and for the country on the eve of the seventh anniversary in February of its so-called revolution, which has caused chaos in the North African state since 2011?

But let’s not forget that this is not the first time the commander of the largest military force in the country committed himself to elections. In a meeting hosted by French President Emmanuel Macron in Paris on July 26, 2017, Hifter made a similar commitment. But no elections took place to see if the military man would honor what he agreed to. Furthermore, Hifter had rejected the elections and announced Dec. 17 the end of the Libyan Political Agreement (LPA) signed on Dec. 17, 2015. So why should Hifter be trusted this time?

It appears that Hifter’s biggest fear was being isolated by the world community and regional powers, including his main backers such as Egypt, if he refused the proposed elections. The UN Security Council reiterated in a Dec. 14 statement its support to the political road map proposed by UN special envoy Ghassan Salame, including holding elections to try to stabilize Libya after years of lawlessness. Egypt and other countries repeatedly expressed their support for the LPA as the only way out of the chaos in neighboring Libya.

Hifter is indeed popular, at least in eastern Libya. However, it is difficult to express that popularity in numbers since there is no professional opinion polls in the country. But it is worth noting that during the summer of 2017, a public campaign launched by activists supporting him called on the Tobruk-based parliament to mandate him, without elections, to lead the country for the coming four years. Despite all of this, it is very doubtful that Hifter will run in the elections at this time, given the prevailing lack of trust and his own fears.

However, accepting the elections to be organized in areas in eastern Libya — which Hifter controls (except in Derna northeast of Benghazi) — means that a major hurdle has been removed, which is likely to enhance the credibility of any elections in the eyes of suspicious voters as well as in the eyes of the international community that has already welcomed the idea.

It seems certain that many of Hifter’s supporters will run for the legislative elections in eastern Libya. Any candidate supported by Hifter is also likely to benefit from voters who have been in exile, imposed on them or not, particularly in Egypt, because Hifter helped many of them resettle in eastern Libya and get access to essential services such as new passports. Over the last two years, Hifter made sure that eastern Libya welcomed any Libyan who had fled his home, particularly in western Libya, and helped them resettle in the eastern region. These included those who fled to Egypt, which is a pretty sizeable group whose votes could represent a significant number.

Whether Hifter runs for office himself is not yet clear, as he never explained his ambitions. Yet his current position as commander of the Libyan National Army (LNA) appears to be secured even with a new parliament, since his supporters and sympathizers are likely to be a sizeable block in the new parliament, whenever elections take place.

However, one legal matter could come up for the former exiled field marshal, as he spent nearly two decades living in the United States after he fell out with his former boss, late Col. Moammar Gadhafi. According to Law No. 24 of 2010, because he possesses American citizenship, Hifter is no longer considered a Libyan citizen unless he surrenders his foreign citizenship or gets Libyan legal permission to keep it. But Hifter has been leading the LNA under the watchful eye of the country’s elected parliament based in Tobruk, in eastern Libya, since 2014, and the issue has not been raised so far.

On the other hand, and for the first time since the first elections of 2012, former regime supporters, officials and sympathizers, particularly those in exile, are registering in mass numbers and encouraging each other to vote and run in legislative elections if they can. They have been very active on social media calling for the like-minded not to ignore elections this time as many of them did in the previous two elections, in June 2014 and June 2012. Back then, the majority of them neither voted nor ran in the elections for different reasons.

What seems to have changed for this sizeable group of Libyans are four things: First, their figure head, Gadhafi’s son Seif al-Islam Gadhafi, is out of jail and he is reportedly encouraging them to vote in mass numbers, as Hassan, one of Seif al-Islam’s confidents, told Al-Monitor anonymously for security reasons, after he recently visited him in Bani Walid, Libya, last month.

Some rumors even go as far as saying that Seif al-Islam himself will run in the presidential elections, however Hassan denied this. He said, “He told me and others that the time is not right for him to run,” insisting that his supporters should not let the opportunity “pass without making their voices heard.”

Second, a major legal hurdle barring many of the former regime officials and supporters from running in elections has been removed when the only elected Tobruk-based parliament revoked the notorious Political Isolation Law passed by the previous parliament under pressure from armed militias. The law bars almost all those who worked with the former regime from holding any public office post, including political and administrative.

Third, the security situation, particularly in eastern Libya, and even in Tripoli, has improved a lot since 2014 when the second elections took place. And finally, Salame has welcomed supporters of the former regime into the political process as long as they respect the rules of the game and play by them — which they appear to be doing.

Seif al-Islam, Gadhafi’s heir apparent, is still wanted by the International Criminal Court in The Hague, an issue he must settle to be accepted to run in the elections.

Hifter’s acceptance of the elections along with the re-emergence of former regime supporters and sympathizers are likely to be game-changers, particularly for Islamist-leaning parties or individuals. However, that could only be better for the country.