In an interview with Al-Monitor, the spokesman for the Libyan armed forces led by Gen. Khalifa Hifter speaks about the UN-sponsored elections and Egyptian efforts to unite the army, as Libya further sinks into chaos and division. 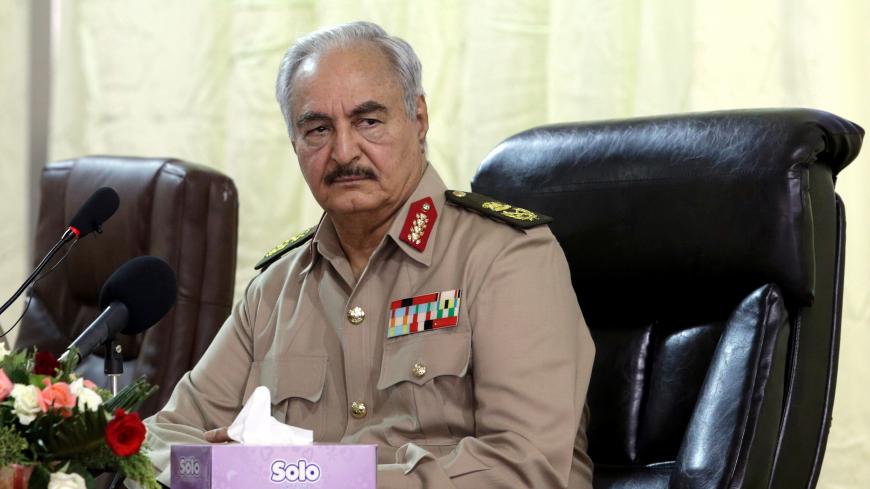 CAIRO — The Egyptian initiative to unite the Libyan military is almost complete after several meetings were held between Libyan military officials who split up following the outbreak of the revolution in February 2011 and the death of Moammar Gadhafi. The initiative aims at laying out the structure of the Libyan unified army. Meanwhile, there are concerns that the Libyan army might take control of the civil power, or that the relationship between the military institution and the civil power will not be clearly defined.

Libya has been plagued by division since anti-government protests began in 2011. Three governments were formed: the internationally recognized Government of National Accord (GNA) headed by Fayez al-Sarraj, the interim Libyan government led by Abdullah al-Thani and the rescue government known as the General National Congress (GNC) led by Khalifa al-Ghawil. The political division affected the military situation, as the Libyan army split up and several militias made up of civilians were formed, while other military men joined the Libyan armed forces led by Gen. Khalifa Hifter.

In an interview with Al-Monitor in Cairo on Jan. 31, Mesmari said that the recent agreement stated that the general army commander should be the elected president of the country.

Mesmari discussed why the Libyan army ’s general commander, Hifter, refused the Skhirat agreement, which Libyan figures, members of parliament and members of the GNC signed in the Moroccan city of Skhirat under the auspices of the United Nations on Dec. 17, 2015.

The GNA based in Tripoli was formed as per the Skhirat agreement, and Sarraj was chosen to spearhead it for one year as of the date of signing. Its term was to be renewed for an additional year in case of constitutional amendment. The constitution was indeed amended and the High Council of State was formed, with its tasks clearly set. The council was to be independent and express its opinion in the bills presented by the government within 21 days, and to give consultations and suggestions to the GNA.

Mesmari revealed to Al-Monitor the sources of the Hifter-led Libyan army’s armament despite the arms embargo on Libya. He also talked about Hifter’s position on running in the Libyan presidential election and how the army would deal with the failure of the scheduled elections this year. UN envoy to Libya Ghassan Salame announced Nov. 29 that the elections would be held in 2018.

Al-Monitor:  What are the latest developments of the meetings in Cairo to unite the army? Are there any disagreements?

Mesmari:  The Egyptian initiative to unite the military institution kicked off in July 2017. The first meeting aimed at creating the framework for the agreement based on which the Libyan army would unite. The second and third meetings that were held in Cairo from Oct. 29 to Nov. 2 constituted a follow-up for the first meeting. During the fourth meeting on Dec. 6-9, we reached an agreement on structuring the Libyan army and determining the relationship between the military institution and the civil authority. We stopped at a key point regarding who will be the general commander of the army. Egypt will settle this issue. The choice was between Sarraj, as per the Skhirat agreement, parliament Speaker Aguila Saleh Issa or establishing a new presidential council with a president and two members until the presidential elections are held in Libya [the council would be the high command of the armed forces]. The last choice was the most probable. It was agreed that Hifter would be the general commander of the armed forces and that he would handle the tasks of the minister of defense for five years. In case this proves impossible and the political leadership finds it necessary to name a minister of defense, the council, the general command and the military institution would have to name a minister of defense. [In the coming days], the final agreement will be revealed.

Al-Monitor:  What are the obstacles facing the unity of the Libyan army?

Mesmari:  The main obstacle is the deteriorating political situation in Libya and the lack of unity between many military officials. In the western part of Libya, some military officials are under the leadership of Sarraj, while others are under the control of GNC leader Ghawil. Still, many military officials are loyal to Hifter’s Libyan army in the eastern and southern parts, while officers loyal to Hifter in the western part outnumber officers obeying Sarraj. However, we do not want to focus on the disputes and divisions in the ranks of military men after the Arab Spring revolutions. The goal is to unite Libya’s military institution.

Al-Monitor:  President Abdel Fattah al-Sisi declared Egypt’s support for the Libyan army on Nov. 9. What form will this support take, and will they back you by sending arms?

Al-Monitor:  What are the guarantees the army will offer to ensure that it will obey any civil authority?

Mesmari:  The agreement to unite the Libyan army is taking place under Egyptian auspices and with the US blessing. Therefore, it has international guarantees binding the army. The agreement states that the general commander would be the president of the country. Before the presidential elections, at the current stage, we will approve of a temporary presidential council until the elections are held.

Al-Monitor:  Salame announced Nov. 29 that the Libyan elections would be held in 2018 and that the UN would assist Libya in the elections. Do you think this is possible? Does Hifter intend to run? Who are the possible candidates?

Mesmari:  We hope the elections will be held in Libya because the Libyan army believes the elections can solve the current Libyan crisis. Regarding Hifter’s position on running in the elections, he has not stated his stance yet — neither has anybody else. The electoral law that sets the candidacy rules has not been passed yet, and Hifter did not even insinuate that he intends to run.

Al-Monitor:  Hifter announced in a TV interview Dec. 29 that if all else fails for a peaceful transition of power through free elections, the Libyan people will delegate power to the army as a final resort. Would this be considered a military coup?

Mesmari:  The term “military coup” is no longer used. It is just a pretext to protract the Libyan crisis. Hifter and the Libyan army did not pledge allegiance to any terrorist entity and they chose to work for Libya. The army in any country is responsible for maintaining the unity and sovereignty of the state. Still, the Libyan army welcomed the elections, which we consider an escape from the current crisis. The Muslim Brotherhood, the Islamic State (IS) and al-Qaeda are the ones opposing the elections because they are afraid of Libya’s unity, which would push them outside the game. The Brotherhood still hasn’t gotten over its failure in the 2014 elections and knows the way to the rule. If the elections fail, we have another way of protecting the state by the power of arms rather than seizing the government. We leave the decision to the Libyan people, and we will not force a certain authority on them. We will not leave Libya in the hands of some criminals.

Al-Monitor:  Why did Hifter oppose the Skhirat agreement?

Mesmari:  Hifter did not criticize, welcome or approve of the agreement. But when it ended in December 2017, which was its timeline, the agreement was no longer applicable. It did not achieve any benefits for the Libyan people and it allowed foreign intervention in Libya. The GNA is a tutelage government because it did not get the approval of the parliament [in Tobruk].

Al-Monitor:  What does Egypt’s support for the Skhirat agreement mean to you? What is Egypt’s take on the current Libyan government?

Mesmari:  Egypt is part of the international community, and it has the freedom to choose to support the renewal of the Skhirat agreement. We might not meet eye to eye, but our stance vis-a-vis the Skhirat agreement is firm, and Egypt’s position on the Libyan crisis is to support Libyans against terrorism. Egypt is keeping its distance from all parties. Sisi said that Egypt is not siding with Hifter against Sarraj or the other way around.

Al-Monitor:  What is your response to UN envoy Ghassan Salame’s call Jan. 18 for lifting the international arms embargo on Libya that has been ongoing since March 2011?

Mesmari:  Salame expressed the opinion of one party in the Libyan crisis, which is the Muslim Brotherhood that refuses the army’s armament because the Arab Spring is against Arab armies. Supplying the Libyan army with weapons would end the Libyan crisis and unite the state. For this reason, Salame’s calls were not welcomed by the Libyans.

Al-Monitor:  What are the sources of armament of the Libyan army in case the international arms embargo on Libya persists?

Mesmari:  The Libyan army has some weapons from the pre-February 2011 incidents before Gadhafi was killed. We also seized the arms of IS and terrorists, and we took back the weapons that they stole from us after the Arab Spring. But the arms embargo on Libya has negatively affected us. The battle will be a long one. After each battle, we take some time off to collect ammunition and weapons by buying them from the local or parallel market. These are our weapons that were stolen from us and are being sold illegally. We are taking them back by force or by paying for them.