Assuming a mediator role between conflicting Libyan parties, Egypt has recently met with both sides over finding a political solution but has yet to make substantial progress. 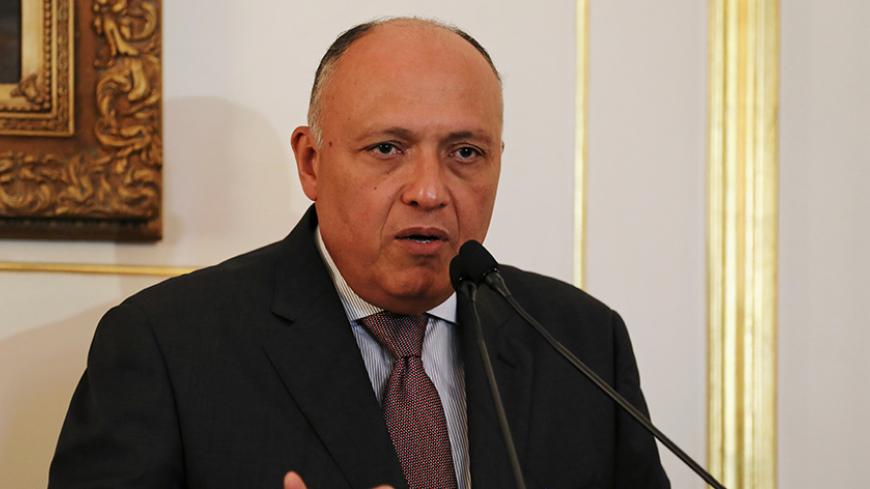 CAIRO — Egypt has repeatedly confirmed standing at equal distance from all parties in Libya to reach a political solution. Observers, however, believe the Egyptian position is contradictory. Cairo officially announced on Dec. 26, 2015, its recognition and support for the presidency council of the Government of National Accord (GNA), headed by Fayez al-Sarraj — which emanated from the Libyan Political Agreement signed on Dec. 17, 2015, under United Nations auspices in Skhirat, Morocco.

At the same time, Cairo provides Sarraj’s rivals in Tobruk with direct support, particularly Commander in Chief of the Armed Forces Khalifa Hifter, who Egyptian President Abdel Fattah al-Sisi called in April 2016 the savior of Libya from terrorism.

Since the overthrow of former President Moammar Gadhafi's regime in 2011, divisions climaxed in Libya in 2014, with the formation of the internationally recognized and supported Tobruk-based parliament. This step was rejected by the parliament that was elected in 2012 and was based in Tripoli, in western Libya. While the two governments and parliaments continue to struggle, Sarraj's mission of leading a two-year transitional period, during which parliamentary and presidential elections are to be held, has become more difficult to achieve.

The biggest obstacle to the Libyan settlement is the formation of a unified Libyan army. This, however, cannot be done without the approval of Hifter, who is provided with direct support from the Tobruk-based parliament.

Observers considered that a solution to the crisis should inevitably be reached after substantial pressures are placed on Hifter in order to convince him to join the UN-sponsored and internationally supported political process. This requires that Hifter’s allies, most notably Egypt, deploy efforts in this regard.

In August 2016, Cairo formed a committee on the Libyan crisis, led by the chief of staff of the Egyptian Armed Forces, Mahmoud Hegazy, upon Sisi’s decision.

Two months earlier, Sarraj had told Reuters that no one or parties — even Hifter who is based in eastern Libya — will be excluded from the national army, “as long as they remain under the central political authority.” This has increased Hifter’s doubts about his position in the Sarraj government and its relations with the army.

The Egyptian mediation efforts succeeded on Jan. 31, 2016, to hold a meeting between Hifter and Sarraj in al-Marj, in eastern Libya. Yet it did not contribute in resolving the crisis. This was accompanied with ongoing failure, as the Sarraj government has not won the motion of confidence yet.

Abu Bakr Baira, a member of the Tobruk-based parliament, attributed the vote of no confidence in Sarraj’s government to a divide within the parliament. He told Al-Monitor over the phone that the army’s situation and Hifter’s powers in the political equation are the most important reasons behind the lack of trust in Sarraj and his government in terms of the completion of the transitional phase. He said that parliament members fear that Hifter, as a key actor, will be excluded from any potential future solution in Libya.

Under Article 8 of the Libyan Political Agreement signed in Skhirat, all of the powers of the higher security and military positions were transferred to the presidency council of the GNA upon signing the agreement. It states that the council ministers should make decisions regarding those serving in these positions during a determined period, or else new appointments shall be decided by the council within a month.

The special representative of the UN secretary-general for Libya, Martin Kobler, said Feb. 8 that the Skhirat Political Agreement could be possibly amended, noting, “Many meetings have taken place to discuss amendments to the agreement, including the question of the Supreme Commandership of the army and the future composition and role of the Presidency Council.”

On Jan. 25, Sarraj told the press that a meeting sponsored by Egypt is expected to be held between him and Hifter within a month in Cairo.

Hifter, however, said in a Jan. 30 statement that no arrangements have been made for an imminent meeting with Sarraj, whether in Cairo or anywhere else.

On Feb. 14-15, Egyptian officials in Cairo managed to meet with Sarraj, Hifter and a number of Libyan leaders separately. It said that a consensus on unchangeable constants was reached, most notably among which is preserving Libya’s unity and territorial integrity.

Cairo explained in a Feb. 15 statement that it was agreed to resolve a limited number of outstanding issues in the Libyan Political Agreement, including to revise the formation and powers of the Presidency Council, the powers and competences of the commander in chief of the armed forces, enlarge the High Council of State and hold presidential and parliamentary elections by February 2018.

Commenting on the agreement, Tobruk parliament member Ibrahim Amish told Al-Monitor over the phone that the items agreed upon during the meetings are not binding. He perceived that the meeting has failed and pointed at Hifter’s rejection to meet with Sarraj, which prompted Egypt to hold separate meetings.

Amish said that Cairo cannot declare that its mediation has failed and was forced to save face in an attempt to reach an agreement in the future.

Amish, who also presides over the parliamentary National Reconciliation Committee, said that the points of contention can be summarized with Hifter’s role, as commander in chief of the army, in any political settlement, as well as his powers, which he does not want to remain in the hands of the Presidency Council, led by Sarraj, as he believes that this would pose a threat to his survival in power.

He added, “Sarraj and his government have broad powers, and it is hard for any solution to be reached in Libya as long as Sarraj remains in his position.”

Baira anticipated that similar to other neighboring countries, the Egypt mediation will not succeed. He said, “Hifter should necessarily remain a key actor in the process, which the Sarraj government backed by the UN and international parties refuses.”

Baira demanded that all internal and foreign actors in the Libyan crisis make concessions to overcome the crisis, or else the situation will never be resolved.