Cairo proposed a political initiative to resolve the Libyan crisis calling for a cease-fire between the conflicting parties, but the Government of National Accord, backed by Turkey, rejected it. 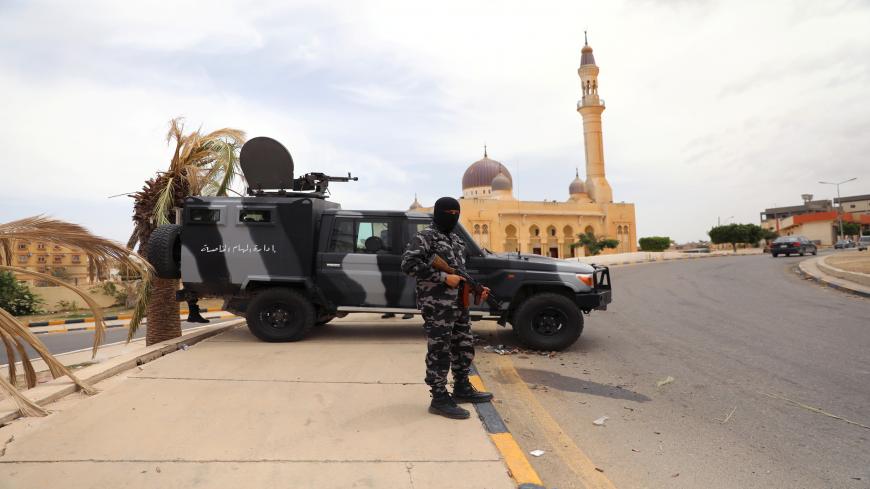 Over a year into the war in Tripoli, Egypt proposed June 6 a political initiative to resolve the Libyan crisis. Egyptian President Abdel Fattah al-Sisi stated during a joint conference with Libyan National Army (LNA) commander Gen. Khalifa Hifter and Speaker of the Tobruk-based Libyan parliament Aqila Saleh that “the initiative will be the beginning of a new stage toward a return to a normal, safe life in Libya,” warning against insisting on the military option to resolve the crisis.

The initiative includes a cease-fire that went into effect June 8, returning to negotiations and compelling all foreign parties to remove mercenaries and the LNA to shoulder its responsibilities in combating terrorism.

The initiative set a transitional period of 18 months, which can be extended with a maximum of six months, during which all Libyan state institutions, especially the main economic institutions, will be reorganized.

Immediately after Cairo announced its initiative to solve the Libyan crisis, Egyptian army forces moved from the Mohamed Naguib military base near the port city of Alexandria to the western borders with Libya. On June 10, the Egyptian Army's Chief of Staff Mohammed Farid visited the army forces in the western area, and noted during his meeting with a number of officers that “the Egyptian army is on high alert to combat all dangers.”

Russian President Vladimir Putin also praised the Cairo initiative during a June 8 phone conversation with Sisi, stressing that “the initiative is working to undermine illegal foreign interventions in the Libyan issue that contribute to fueling the crisis.”

On June 10, US President Donald Trump phoned Sisi to welcome the Egyptian efforts to achieve a political settlement and end the violence by supporting the cease-fire in Libya.

However, the Libyan Government of National Accord (GNA) did not adhere to the proposed cease-fire, and it continued to fight to control the strategic coastal city of Sirte and the Jufra base. On June 7, GNA Interior Minister Fathi Bashagha told Bloomberg, “Upon retaking the Mediterranean city of Sirte and the Jufra base in central Libya, the internationally recognized government in Tripoli will be open to entering into political talks.”

On June 8, Turkish President Recep Tayyip Erdogan noted during an interview with TRT Arabi, “The successes achieved by [Fayez] al-Sarraj government have driven Hifter over the edge, and the GNA’s efforts to liberate Sirte and control the Jufra base are ongoing. According to my point of view and recent developments, Hifter will be out of the equation in Libya at any moment now.”

On June 15, Turkish Foreign Minister Mevlut Cavusoglu stressed that his country is working with Russia to end the fighting in Libya.

The Cairo initiative followed LNA field losses, as it withdrew from the city of Tarhouna June 5 after the GNA forces took control of al-Watiyah base May 18.

During a June 9 press conference, Erdogan ruled out a military solution to the Libyan crisis, stressing, however, that Ankara would continue to support the GNA militarily.

On June 11, Turkish Foreign Minister Mevlut Cavusoglu announced that Ankara rejected the Egyptian initiative, stressing “it is possible that the cease-fire in Libya could be sponsored by the United Nations.”

At a June 8 press conference, LNA spokesman Maj. Gen. Ahmed al-Mismari commented on the GNA’s failure to adhere to the Cairo cease-fire proposal, saying, “The militias' refusal to Cairo’s proposal is cutting off the voices calling for peace, and the military operations will thus continue until they either commit to the initiative or they are eliminated.”

Although the cease-fire was not implemented, the UN Support Mission in Libya announced June 10 the resumption of the third round of Libya's 5+5 military talks with the participation of both the GNA and the LNA.

Ramzi al-Rumaih, adviser to the Libyan Organization for National Security Studies, told Al-Monitor, “The Egyptian initiative received Arab and international support because everyone realized that the continuation of the war in Libya threatens the stability of the region and that Turkish violations threaten European interests and affect Egyptian national security.”

He added, “Turkey and the GNA are opposed to the Egyptian initiative because it requires the dissolution of the militias, and the political decision within the GNA is subject to the approval of the militia lords and mercenaries.”

Rumaih noted, “Turkey wants to control the city of Sirte and the Jufra base before agreeing to any negotiations, due to their proximity to the country’s oil crescent, and thus allows it to control Libyan oil.”

In the same context, Libyan parliamenarian Ziad Daghaim told Al-Monitor, “The Cairo initiative is important in terms of content and timing, and so it has imposed itself on the international community as an appropriate solution to the Libyan crisis.”

He added, “Turkey does not want to hold elections as the Egyptian initiative proposed, because Ankara wants to keep GNA Prime Minister Sarraj alone in power with his control over oil revenues, so the political track will be disrupted by setting obstacles to military negotiations.”

Daghaim added, “Sarraj understands that his fate is threatened if the elections are held in Libya, so Turkey will not commit to a political solution so it can preserve its gains.”