Libya’s parliament reaches out to Ankara leaving Gen. Hifter in the cold

The recent visit by a Libyan parliamentary delegation to Ankara might indicate a serious rift between eastern Libya’s allies forcing Gen. Khalifa Hifter to reconsider his choices. 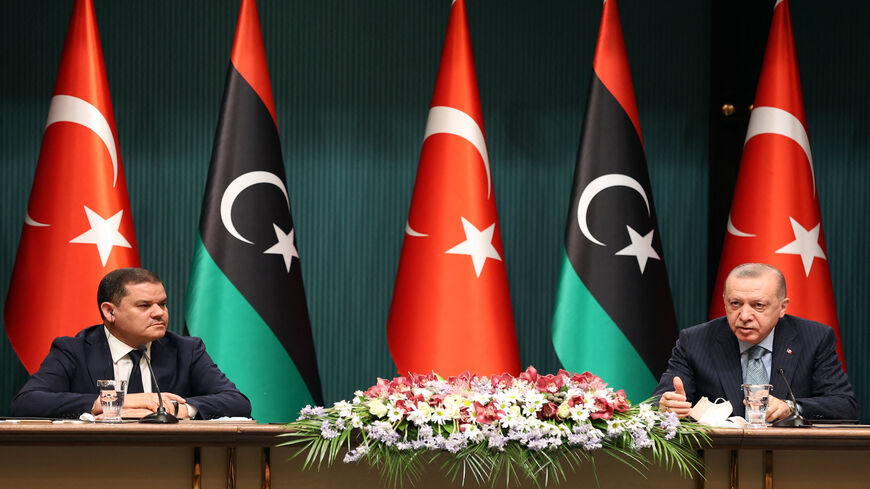 A group of Libyan parliamentarians paid an official visit to Turkey Dec. 15, meeting Turkish President Recep Tayyip Erdogan and the parliament speaker. The seven-member group, headed by Libya’s deputy parliament Speaker Fawzi al-Nuwairi, arrived in Ankara for the two-day visit invited by the Turkish parliament’s Libyan-Turkish Parliamentary Friendship Group. Little is said about what was discussed with the president. However, the Libyan side said in a statement that they discussed commercial and consular issues.

The vague statement, published on the Libyan parliament’s website, said that the guests also “discussed” matters including reopening of the Turkish Consulate in Benghazi, resumption of flights and reactivation of maritime links between eastern Libya and Turkey. Ankara closed its consulate in May 2014 citing security concerns because of clashes between different militias and Gen. Khalifa Hifter’s forces.

Notably, the delegation’s statement said that the trip was authorized by the “presidency of the parliament” in Tobruk in eastern Libya. This is the first time any Libyan parliamentarian has visited Turkey on the official invitation, as the two sides have been at odds for most of the last seven years.

The years of animosity started just after Hifter, with parliament backing, launched his military operations in Benghazi in 2014 code-named Al-Karama (Dignity) Operation vowing to clean Libya of “terrorists and militias.”

After the 2011 fall of the Gadhafi regime much of eastern Libya, including its regional capital Benghazi, was dominated by a coalition of armed militias including the terrorist group known as Ansar al-Sharia. Under their control, widespread assassinations targeting military personnel, security officers and activists became a daily occurrence. Starting from Benghazi, Hifter wanted to flush out all militias — who at one point included Islamic State cells.

The Turkish visit taking place at this time and being authorized by parliament Speaker Aguila Saleh must be contemplated in the wider political picture in Libya where alliances “usually shift very quickly,” Salem Belgasem, a political science professor at the University of Benghazi, told Al-Monitor. It is the strongest indication yet of a “political rift” between eastern Libya’s two strong allies Hifter and Saleh, he concluded.

Hifter and Saleh have been dominant forces in eastern Libya for much of the last seven years, and it was Saleh who rallied his fellow parliamentarians to support Hifter in his military campaign.

Belgasem said that the Tobruk-based legislator provided political “legitimacy and national identity” for Hifter’s Libyan National Army (LNA) successfully “marketing it as a disciplined professional army” rather than a militia like any other in the country. Indeed, many former professional officers and remnants of the Gadhafi era army joined the LNA.

Hifter’s forces took control of most of eastern Libya all the way to the Egyptian borders making him the dominant force in the region. In 2015, Hifter’s self-styled LNA, also known as the Arab Libyan Armed Forces, made big gains in the country’s southern region. His troops now control much of the south and the oil-producing region in central Libya. All these military gains made Hifter an “essential part” of any political settlement in Libya.

If this was bad news for Hifter, as it means splitting the vote in eastern Libya, the Ankara visit must have made him pause and think about his position and political alliances. The power-hungry general should consider how to make the transition bearing in mind his own rapprochement with Ankara. Turkey is an important player in the Libyan conflict that cannot be discounted. Hifter is yet to comment on the visit, but there are indications that he might be seeking to mend ties with Ankara.

For example, in an unexpected move, he met in Benghazi Dec. 21 with six of the presidential candidates including his once most astonishing enemy, Fathi Bashagha.

Bashagha served as minister of interior in Libya’s United Nations-recognized Government of National Accord (GNA) that left office earlier this year. The meeting ended with a televised statement delivered by Bashagha that called for unity.

Bashagha, in his former post as minister of interior, used to refer to Hifter as an “outlaw and war criminal.” He also supported the GNA’s November 2019 agreements signed between Tripoli and Ankara, just as Hifter’s LNA were closing in on the capital Tripoli.

Hifter ordered his attack on Tripoli on April 4, 2019, to get rid of the GNA in order to “liberate Tripoli from Islamists [and terrorists]," as he claimed. The coalition of militias countering the LNA, just a few miles from the city center, was on the brink of collapse when Turkey sent its troops with thousands of Syrian mercenaries and deployed armed drones to help the GNA push the LNA back.

In return for its help — effectively rescuing the GNA at the last minute — Ankara signed a security and maritime deal and demarking its sea borders with Libya. This further angered Hifter and his ally Saleh, and as a result, both deals were never ratified by the legislator. While the maritime deal is said to benefit Libya, very little is made public about the security deal.

Nonetheless, both Ankara and Tripoli acted on the agreements and now Ankara has bases in different locations in Libya, including the strategic al-Watyia base overlooking the Mediterranean. Al-Watyia was the springboard for Hifter’s all major military operations in western Libya and losing it, in May 2020, meant the LNA’s defeat.

To Milad Saeid, political researcher in Tripoli, Hifter won the public relations battle despite losing the “military one” against Turkey, as the “presence of Turkish troops” on Libyan soil provided him with enough ammunition in the public opinion battle.

Saeid told Al-Monitor that Hifter’s camp succeeded in portraying Turkey as “the invader” that must be fought relentlessly. At one point the general and his eastern Libyan allies even called for jihad to repel the “Ottoman invaders,” in reference to the time when Libya was part of the Ottoman Empire.

In June 2020, LNA forces were defeated at the gates of Tripoli and forced to retreat to their current positions around Sirte in central Libya. That retreat would not have been possible without Turkey’s “generous and quick” help, Salama Saleh, Tripoli resident who was displaced during the war, told Al-Monitor.

One of Hifter’s close aides speaking on condition of anonymity commented by saying that as alliances and “political buddies” always change in Libya — and seeing Saleh “reaching out to Ankara” — is nothing unusual except for, maybe, the timing. The aid continued by saying that “both men [Hifter and Saleh] are seeking power” and in a power struggle everything is possible.

Al-Monitor asked Belgasem if Hifter might be visiting Ankara? He said, “I would not be surprised” to see him visiting Turkey, but it is too earlier now.

Is Hifter trying to befriend Ankara’s friends in Tripoli as a backchannel to Turkey? Bashagha, who visited the general recently, is known to be “Ankara’s man in Tripoli,” Belgasem said. Any such move by Hifter is unlikely to be welcomed by regional powers that backed him, such as Egypt and the United Arab Emirates. Indeed, Abu Dhabi is opening up to Ankara, but that does not mean it will be happy to see “Ankara embracing Hifter,” he added.

The country’s presidential vote has been delayed until Jan. 24. This might give Hifter and Saleh enough time to contemplate their next moves. The septuagenarian general and speaker might not have another chance to rule Libya if they miss the upcoming polls, which means they are out to gather as many allies as possible.