Battle for Tripoli appears destined to grind on in Libya

Since Libya’s eastern military commander Khalifa Hifter launched his April offensive against the capital Tripoli in the west, little progress has been made, while continuing attempts at peace have failed. 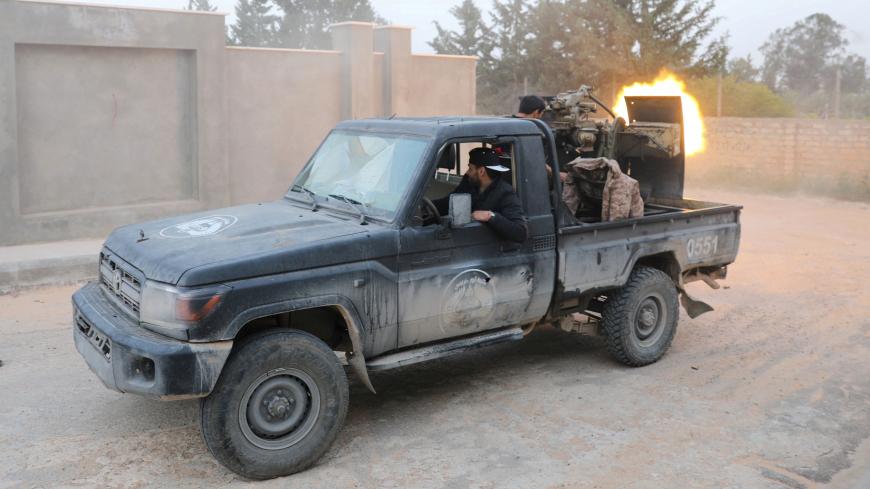 Despite repeated diplomatic setbacks and heavy fighting among rival forces near Tripoli, UN envoy Ghassan Salame‬⁩ met over the weekend with Libyan National Army (LNA) commander Gen. Khalifa Hifter in al-Rajmeh in suburban Benghazi. The men discussed possible diplomatic solutions to the country's crisis — but to no avail.

Libya has been in turmoil since 2011, when longtime leader Moammar Gadhafi was ousted. Since launching Operation Karama (Operation Dignity) in Benghazi in May 2014, Hifter's group in the east has fought for control of the country against the UN-backed Government of National Accord (GNA) in Tripoli in the west.

Hifter has vowed to “rid Libya” of all “terrorists and militias” — as he calls his enemies, who at one point included the Islamic State (IS), al-Qaeda and Ansar al-Sharia.

In July 2017, Hifter declared victory in Benghazi, Libya’s second most populous city. It then took the LNA until March of this year to secure most of southern Libya, home to all of the country’s major oil fields.

Securing the south meant that attacking Tripoli was imminent. Hifter met with opposing leaders in February in Abu Dhabi in an effort to avoid the attack, but they failed to reach an agreement. This signaled that military confrontation could break out at any time — which is what happened April 4.

LNA troops made some gains in the first week of the attack, but since then have been held at the southern outskirts of Tripoli. Many commentators attribute this to Hifter’s miscalculation of the kind of battle he would be facing, and the size of forces countering him. Militias and armed groups, nominally loyal to the opposing force headed by Fayez al-Sarraj, have so far prevented any breakthrough by the LNA toward the city itself, though Hifter's forces continue to launch deadly attacks on the Tripoli airport.

In the third month of the battle for Tripoli, both sides are as far away from a peaceful settlement as they have ever been, with each blaming the other for the failure. According to the World Health Organization, more than 600 people have been killed, including civilians, and more than 3,500 wounded. In a report published June 21, the UN High Commissioner for Refugees said almost 94,000 people have been displaced because of the fighting in Tripoli's southern outskirts.

While civilians continue to pay for the brunt of war, neither side is giving in. The most serious attempt to end the violence was a mediation plan proposed by a group of Libyan figures from inside and outside the country.

On March 20, Salame announced a pan-Libyan forum for April 14 that was to lead to general and presidential elections. Ten days before the scheduled meeting, the LNA launched its attack on Tripoli, shattering the planned conference altogether.

Al-Monitor recently spoke to individuals involved in decision-making on both sides to get a glimpse of what conditions each is proposing to end the fighting and return to the political process.

Hassan (a pseudonym), a top Hifter aide, disputed the idea that the Tripoli battle has stalled and it might be time to return to the peace process. He said the lack of progress is actually “a battle tactic our forces are using, aimed at exhausting the enemy as much as possible while drawing it away from residential areas” to minimize collateral damage.

He emphasized that LNA commanders on the ground “knew from the start what kind of battle it would be and estimated how long it would take.” However, he refused to reveal how long that might be.

Sarraj recently proposed a peace initiative in a televised speech June 16. The proposal — which is very similar to Salame’s — calls for a national forum that excludes Hifter, accusing him of war crimes. Naturally, the Hifter camp immediately rejected the idea.

A top Hifter aide, Brig. Gen. Khaled al-Mahjoub, said in a press statement that same day, “Political solutions are useless while armed groups, militias and terrorists are in Tripoli.” Hifter, speaking to local newspapers June 20, confirmed his rejection of Sarraj’s proposal. He emphasized his support for a political settlement but “only after we liberate Tripoli” — meaning the war will continue for now. He also dismissed Sarraj as a “puppet of the militias who can't sign any agreement they don't like.”

Sarraj’s proposal for a national forum of tribal and political leaders calls for a detailed road map for national elections before the end of 2019 and a new sonstitution. But in addition to excluding Hifter, it ignores the elected parliament in the east, a strong LNA supporter.

Al-Monitor asked Hassan if Hifter had accepted one peace plan proposed by public figures, tribal leaders and former regime officials led by Ali Abo — a minister from the era of Gadhafi. Hassan said, “Yes, we accepted it on one condition: the departure of all members of militias, including top leaders, from Tripoli.”

The proposal calls for a weeklong cease-fire, an inclusive national forum that would draw up a plan for elections after a one-year transitional period, and the withdrawal of militias or the disarming of those who want to stay. Abo, who lives abroad but refused to reveal where, told Al-Monitor Hifter did accept the plan in principle.

The other side, however, did not.

Mohamed (a pseudonym), a mediator representing the GNA, met Abo in Tripoli in May but failed to reach an agreement. Mohamed told Al-Monitor, “The militias’ top leaders rejected the initiative for two reasons: First, they still believe they can defeat the LNA and second, they want some guarantees [that they would be protected] from any future prosecution if they were to consider any such initiative.”

Sadeq (a pseudonym), an academic with close links to the Tripoli peace discussions as the GNA's go-between man, confirmed to Al-Monitor, “The militia leaders are divided about what to do. They are only united by their hatred of Hifter and they have little trust in him.”

Sadeq added that the militia leaders "have this illusion that people inside Tripoli are supporting them and that defeating the LNA is only a matter of time.”

He also denied the existence of any feasible alternative peace proposal, saying, “Top militia leaders will reject any peace plan without getting guarantees [of no trial], since they are implicated in crimes. So they have no alternative but to fight until the end.”

When asked if one month would be enough for the LNA to take Tripoli, Hassan, the top Hifter aide, said, “It's hard to put a time frame on battles taking place in and around residential areas.”

Regarding the civilian casualties and whether they would be a reason for the LNA to cease hostilities, Hassan said, “We are very sorry for this and we are doing everything possible to avoid civilian areas, which is why it is taking us [LNA] all this time to liberate Tripoli.”

But he said it was Sarraj who reneged on “our Abu Dhabi agreement with him, not us [Hifter].”

While it is difficult to confirm what all Hifter and Sarraj agreed to at the Abu Dhabi meeting Feb. 27, they certainly agreed to ending the status quo by holding general elections with the help of UN envoy Salame, as soon as possible. While no time frame was given, it's assumed elections would have taken place earlier this year had the agreement been honored.

However, organizing elections requires a secure and relatively peaceful environment, which can only be achieved under one army — not different militias controlling different parts of the country, particularly Tripoli. Also, the GNA’s control over the militias in Tripoli is minimal, which might explain why Sarraj can't really deliver on any agreement with Hifter. Another chance for peace is being missed, further prolonging the suffering of the majority of Libyans. With Hifter personally dismissing any peace talks, Libyans are bracing for yet another long, hot summer.