What’s behind strained relations between Egypt and Libya’s GNA?

Relations between the Libyan Government of National Accord and the Egyptian regime are degenerating as the two sides exchange accusations. 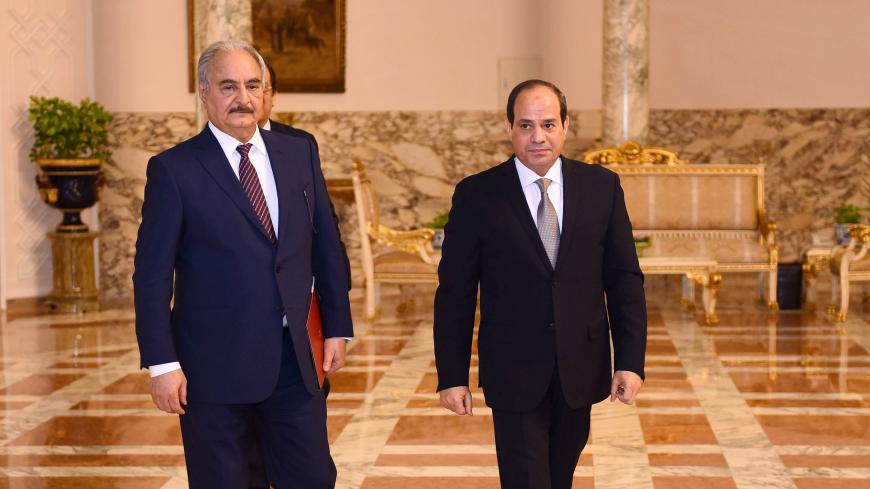 CAIRO — Libyan Foreign Minister Fathi Bashagha with the internationally recognized Government of National Accord (GNA) rejected on Aug. 23 in an interview with the German News Agency the Egyptian regime's support for the Libyan National Army (LNA), which is led by Field Marshall Khalifa Hifter.

A crisis erupted between the GNA and the ruling regime in Egypt after the Egyptian Foreign Ministry issued a statement Aug. 13 in which it called on the UN Support Mission in Libya to cooperate with the Libyan parliament to find a solution to the current crisis.

The statement called for the fair and transparent distribution of resources in Libya and the disbanding of armed militias, which drew the ire of the GNA and prompted its Foreign Ministry to accuse Egypt in an Aug. 15 statement of meddling in Libya's internal affairs.

The ministry condemned the fact that its Egyptian counterpart called on the UN Support Mission in Libya to “engage more closely with the elected representatives of the Libyan people,” and said this “neglects the bodies that emanated from the Skhirat Agreement.”

Of note, the GNA and the High Council of State were formed in accordance with the Skhirat Agreement signed in 2015 in Morocco under the UN auspices.

The Ministry of Foreign Affairs of the GNA concluded that “Libya's sovereignty is a red line, and neither the Libyan government nor the Libyan people will allow any interference in their internal affairs despite the fragmentation plaguing Libya’s institutions.”

The Egyptian statement comes in the wake of an Egyptian initiative that led Cairo to host 70 Libyan parliament members on July 13 in an attempt to unify their ranks and address the political divide over the support of the LNA. Following meetings with the Egyptian National Committee on Libyan Affairs, the delegation of parliament members issued a statement July 15 affirming that the solution to the Libyan crisis must stem from the Libyan parliament in its capacity as the sole legitimate authority elected by the people. The statement added that a new national government needs to be formed.

It should be noted that Egyptian President Abdel Fattah al-Sisi had met several times with head of the GNA Fayez al-Sarraj, most recently on April 14, 2018, and Cairo's support for the Libyan National Army (LNA) did not affect the relationship between Egypt and the GNA.

“Our support for the LNA will not stop, and our support for Field Marshall Khalifa Hifter does not come at the expense of our relationship with the head of the Government of National Accord Faez al-Sarraj. Cairo supports a political solution,” Sisi told foreign and local reporters on Nov. 8, 2017.

But the relationship between the GNA and the Egyptian regime started to become lukewarm after the LNA announced a military battle against militias loyal to the GNA to control the Libyan capital, Tripoli, on April 4.

Cairo vocally supported the LNA's military actions in Tripoli, and the Egyptian president received Hifter, the LNA commander-in-chief, several times in Cairo after the battle and announced his support for him without any meetings or diplomatic contacts taking place between the Egyptian regime and the LNA.

These lukewarm relations between Egypt and the GNA degenerated after Turkey's declared military support for the GNA in the Tripoli battle. Turkish President Recep Tayyip Erdogan announced in June that “Turkey is providing weapons to the Tripoli government, which is necessary to restore the balance in the war against Hifter.”

The Turkish intervention in the Tripoli battle led to the defeat and withdrawal of the LNA from the city of Gharyan in June. It also led the GNA to control the city, which prompted Hifter to declare war on the Turkish invasion of Libyan territory.

The losses Turkey inflicted on the LNA prompted the Egyptian regime to support its most prominent ally, the LNA, as the Egyptian Foreign Ministry officially attacked the armed militias and called for their disbanding and fighting, saying they are forces fighting under the GNA.

Libyan parliament member Ali al-Saidi told Al-Monitor, “The clash between Egypt and the GNA erupted after Cairo closed the door to communication with the GNA for supporting armed militias.”

“Cairo refused to communicate or exchange visits with the GNA following the Tripoli battle because that government allowed Turkey to control its decisions and ignited the fighting, and instead of cooperating with the LNA to get rid of the militias, it chose to clash with it and its supporters,” he added.

But in the wake of the Egyptian Foreign Ministry’s recent statement, direct confrontation became evident, as statements attacking Egypt started to roll out. For example, the Libyan High Council of State, which supports the GNA, accused in a statement issued Aug. 15 the Egyptian government of sparking confusion in the Libyan scene by disregarding the legitimacy of the GNA and High Council of State, both of which have been established based on the political agreement concluded in Skhirat.

Asked about the future of the relationship between Egypt and the GNA, Saidi said that “confrontation and the lack of communication will be the name of the game, but there will be no rupture because Egypt is part of the international community, which recognizes the GNA.”

Hani Khallaf, a former Egyptian deputy foreign minister, told Al-Monitor that “Turkey's declaration that it is sending weapons to the GNA to fight the LNA has strained relations between the GNA and Egypt.”

“Egypt must reopen the channels of communication with the GNA in order to reach out to all Libyan parties, but the GNA also needs to act with good intentions and stop supporting extremist armed militias because Cairo cannot stand the presence of militias in an Arab sister state,” he added.