Egypt announced an international alliance that includes Greece, Cyprus, the United Arab Emirates and France to confront Turkish provocative moves in Libya and the Mediterranean. 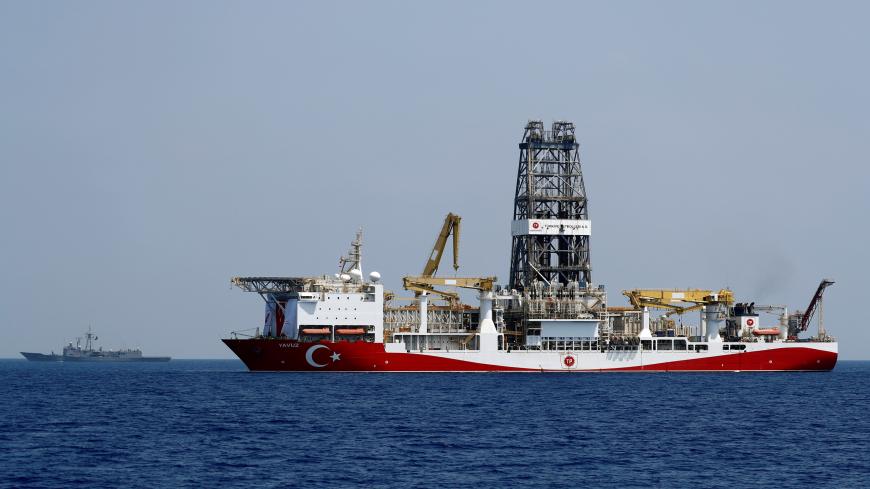 Egypt has announced an anti-Turkey alliance that includes Greece, Cyprus, the United Arab Emirates (UAE) and France to confront Turkish moves in Libya and the Mediterranean. The announcement was made during a virtual meeting with the foreign ministers of these countries on May 11.

In a joint statement issued shortly after the meeting, the five-party alliance said it will focus on confronting the Turkish moves in the territorial waters in Cyprus, where Turkey has been carrying out “illegal” excavations in the Mediterranean under Cyprus sovereignty.

The European Union condemned May 16 the drilling and exploration operations of the Turkish drill ship Yavuz that has been drilling off Cyprus since April.

On May 3, Greece condemned two Turkish aircraft flying over Greek islands, stating that the Turkish jets buzzed a Greek chopper transporting the minister of defense and army commander who were traveling over a small island in the Aegean Sea.

The alliance statement also criticized Turkish actions in Libya, and the memorandum of understanding on the delineation of maritime borders in the Mediterranean and the understanding on security and military cooperation, both signed in November 2019 between Turkey and the internationally recognized Tripoli-based Libyan Government of National Accord (GNA) headed by Fayez al-Sarraj.

On May 14, the Turkish Petroleum Corporation submitted a request to the GNA to obtain permission to start exploration in the eastern side of the Mediterranean. Turkish President Recep Tayyip Erdogan also discussed with Sarraj May 17 the executive steps of the above-mentioned memorandum.

The anti-Turkey alliance also condemned the ongoing war in Libya and the Turkish military support for the GNA, calling on Turkey to stop the flow of foreign fighters from Syria to Libya.

The Turkish military movements in Libya have changed the course of the battles ongoing around Tripoli between pro-government forces and eastern military strongman Khalifa Hifter. The latter’s self-proclaimed Libya National Army (LNA) withdrew from al-Watiya air base May 19, in light of attacks by the GNA, backed by Turkish military battleships and airstrikes, according to Ahmed al-Mismari, spokesman for the Libyan army.

The alliance’s joint statement concluded that it will continue to hold regular consultations, which according to pundits is further confirmation of the alliance endeavors to keep Turkey at bay.

The statement raised the ire of Ankara, as the Turkish Foreign Ministry announced in a May 11 statement that “Ankara was successful in disrupting the sabotage schemes of these countries in the region and their efforts to support putschists.”

Egypt and the UAE are openly supporting the LNA, with Egyptian President Abdel Fattah al-Sisi announcing in December 2019, “We support the LNA and we will not abandon it.”

In April, the UAE praised the efforts of the LNA in confronting extremist militias in Libya.

Tariq Fahmy, a professor of political science at Cairo University, told Al-Monitor, “The five-party alliance succeeded in achieving its first goal that is to raise Turkey’s concerns, which was evident in the Turkish Foreing Ministry’s statement that attacked each of the countries party to the alliance.”

He said, “France’s participation in the alliance is of paramount importance, since it is seen as an EU power, which could contribute to imposing expected sanctions on Turkey in order to protect Cyprus from Turkish violations."

Fahmy added, “France will play an important role in the alliance because it is a permanent member of the United Nations Security Council, and thus can veto any decision in favor of Turkish moves in Libya.”

GNA Foreign Minister Mohamed Taha Siala said in a May 18 statement that his “ministry is preparing a file to document violations of the countries that support Hifter through quantities of arms found in al-Watiya air base, to be submitted to the Security Council.”

Fahmy noted that France gives further impetus to the new alliance, as it is part of the EU naval mission, dubbed Irini, launched in April to enforce an arms embargo on Libya “and stop Turkey from sending arms to the GNA to fight the LNA.”

In early May, Turkish Defense Minister Hulusi Akar had called on the parties to the Irini naval mission to reconsider their support of the LNA. Meanwhile, the Turkish state-run Anadolu News Agency published an article May 10, accusing France of preventing Turkish military support for the GNA.

In July 2019, the GNA’s Interior Minister Fathi Bashagha had accused France of sending troops to Libya to support Hifter’s LNA in his offensive on Tripoli.

Meanwhile, French President Emmanuel Macron expressed his support for the LNA’s fight against terrorism during a March 9 meeting with Hifter in Paris.

“The continuous Turkish violations in Libya and the Mediterranean will probably cause the alliance to become militarized and form a joint military force to protect the interests of the involved countries and to step up security, strategic and information coordination against Turkey,” Fahmy said.

Hassan al-Hassi, a Libyan political analyst, told Al-Monitor, “The coming period will witness the formation of new coalitions such as the five-party alliance over the declared Turkish military intervention in supporting the GNA and threatening the interests of the concerned countries.”

He added, “Egypt is the guarantor of the continued cohesion of said alliance to preserve its national security on the border with Libya against the Turkish movements, especially following the recent defeats of the LNA."

During the African Union-led Contact Group meeting on Libya May 19, Sisi said, “Libya’s stability is a determinant of Egypt’s national security and will not tolerate terrorist groups and those who support them.”

Hassi concluded, “France has joined the [recently formed] alliance aimed to preserve its interests in Libya that are threatened by Turkey and its support for the GNA. This is why France will seek to [continuously] support and enhance the alliance."