As Hifter loses ground in Libya, Egypt weighs options to support him

While Egypt supports Libyan commander Khalifa Hifter against the Turkish-backed Government National Accord, it will refrain from interfering directly in the war. 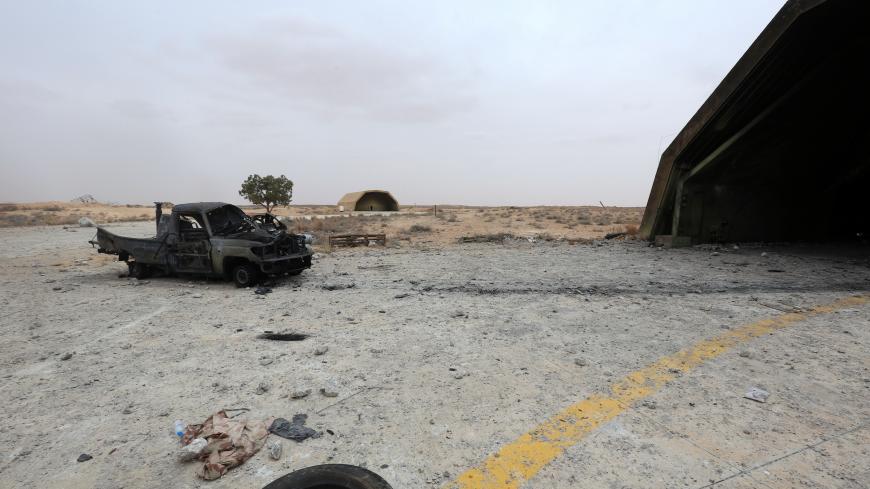 The prime minister of Libya’s UN-recognized Government of National Accord (GNA), Fayez al-Sarraj, announced May 18 that his forces had taken control of the key al-Watiya air base from the forces of Khalifa Hifter, commander of the so-called Libyan National Army (LNA).

Sisi said it is important to show the highest level of combat readiness to protect Egypt's national security. The meeting discussed the latest Libyan developments and stressed Sisi’s rejection of foreign interference in Libyan internal affairs.

Presidential spokesman Bassam Rady said in an official statement that the president was briefed during the meeting on the security situation on all Egyptian strategic fronts as well as on the efforts of the armed forces to control the border and pursue terrorists in North Sinai and the Libyan border.

In the early hours of May 19, LNA spokesman Maj. Gen. Ahmed al-Mismari issued an official statement in which he explained that Hifter had commanded the relocation of his forces from the Tripoli front lines, stressing he had not been defeated as the GNA claims. Hifter's forces have suffered a series of setbacks in recent weeks as pro-government forces seized the cities of Sabratha and Sorman, west of the capital.

“The withdrawal of the forces from the al-Watiya base kicked off three or four months ago, when we withdrew combat aircraft, ammunition, spare parts and heavy equipment. Individuals subsequently withdrew under air cover,” he added, describing the withdrawal process as excellent and aimed at preserving lives.

On the sidelines of Sisi’s meeting with the African Union-led Contact Group on Libya, the Egyptian presidency issued another, more direct statement regarding the Libyan developments. According to it, Sisi stressed during the meeting that Libya’s stability is vital to Egypt's national security and that Egypt has not and will not tolerate terrorist groups or parties who offer support them.

Khaled Okasha, head of the Egyptian Center for Strategic Studies, said the LNA found it important to pull back amid mounting pressure on al-Watiya air base.

Okasha told Al-Monitor that Hifter’s withdrawal from the base was a tactical move to protect the remaining military equipment and weapons that were not destroyed in Turkey's airstrikes.

An Egyptian security source told Al-Monitor on condition of anonymity that Hifter’s withdrawal from al-Watiya is not a defeat but a tactical move to amass forces in the city of Tarhuna, southwest of Tripoli. The city is considered a launching point for Hifter’s forces to liberate Tripoli from the hands of terrorist militias backed by Turkey, the source added.

He pointed out that Egypt will continue to support Hifter politically, diplomatically, logistically and security-wise against terrorist groups in Libya.

The source said strong coordination continues between the Egyptian leadership and Hifter, with whom Sisi met in August 2019 to discuss several issues including the battle for Tripoli.

Al-Arabiya reported that during the August 2019 meeting, Hifter requested Egyptian support for the LNA in international forums, especially with regard to lifting the arms embargo imposed on Libya, and that the two discussed security coordination between their countries.

Libyan journalist Abdel Sattar Hoteitah said that the recent Turkish strikes in support of the GNA in Libya were primarily aimed at evicting Hifter from Tarhuna, but when the strikes failed to achieve their goal, [Turkey] sought to pressure Hifter on another front.

On May 20, GNA spokesman Colonel Mohamed Qanunu announced the destruction of an air defense system used by Hifter’s forces in Tarhuna. Qanunu said his forces are also pursuing Hifter’s fighters in the capital.

Hoteitah stressed that Egypt fully supports Hifter in his war against terrorist militias backed by Turkey and said that while Egypt will not intervene militarily in Libya, it will nonetheless support Hifter at the security and logistical levels.