Turkey conducted a military drill in the eastern Mediterranean that was followed by an Egyptian-French drill amid tensions in the region among Turkey, Greece and Cyprus on gas exploration, and between Turkey and Egypt on Libya. 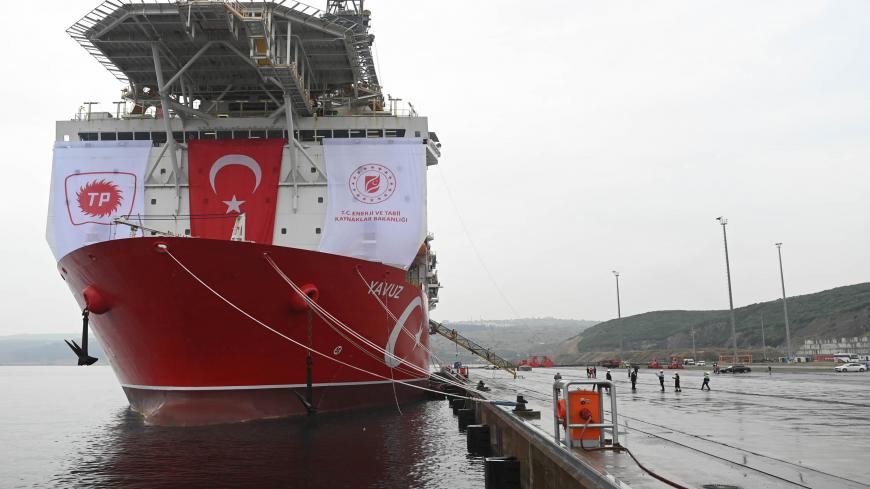 A picture taken at the port of Dilovasi, outside Istanbul, shows the drilling ship Yavuz scheduled to search for oil and gas off Cyprus, June 20, 2019. - BULENT KILIC/AFP via Getty Images

CAIRO — The Turkish Ministry of Defense announced July 25 via Twitter that the Turkish air force carried out military exercises in the eastern Mediterranean. It also posted photos and videos confirming the drill.

This comes in light of the escalating regional tensions between Turkey, Greece and Cyprus over gas exploration in the eastern Mediterranean, as well as between Turkey and Egypt on Libya.

Greek news website Greek City Times reported July 26 that Turkey “withdrew some warships” from an area off the coast of Greece and deleted a tweet from the Turkish Embassy in the United States saying the Turkish drilling ship Oruc Reis had begun research in the eastern Mediterranean. The website said that the Oruc Reis “remains moored outside Antalya.”

Maj. Gen. Nasr Salem, former head of the Egyptian army’s reconnaissance and professor of strategic sciences at Nasser Military Academy, told Al-Monitor, “These exercises are messages to specific parties. Turkey mainly aims to reassure the [Libyan] Government of National Accord [GNA] headed by Prime Minister Fayez al-Sarraj as well as the Syrian mercenaries that are working to tranfer them to Libyan territory that it can protect them. It is also sending a message to Greece, by showing off its naval capabilities.”

Meanwhile, French-Turkish relations are witnessing rising tensions in light of the situation in Libya. Paris has condemned Ankara’s interference in Libya and its support to the GNA, as well as its deployment of mercenaries to Libya. Ankara, for its part, has said that the French support for Libya’s eastern military commander Khalifa Hifter has worsened the crisis in Libya. Relations are also tense between the two countries in regard to the Turkish gas drilling operation in the eastern Mediterranean.

Salem explained that the military exercises that took place recently in the Mediterranean represent a deterrence strategy, whereby each party tries to flex its muscles and show off its capabilities to the other party.

“The Turkish and Egyptian exercises are a form of moral pressure on the opponent,” he noted. Egypt has the largest naval fleet in the region. It previously carried out large military maneuvers — such as the Qader/National Defender 2020 maneuver in January and the July 9 maneuver dubbed “Hasm 2020” — which reflected the Egyptian armed forces’ readiness to secure the country’s borders.

Turkish President Recep Tayyip Erdogan had announced Jan. 5 the start of the deployment of Turkish soldiers in Libya. On Jan. 2, the move was greenlighted by the Turkish parliament, amid Arab and international criticism.

On June 20, during an inspection tour of Egyptian armed forces stationed in the west near the border with Liya, President Abdel Fattah al-Sisi had asserted, “Any direct intervention from the Egyptian state has now acquired international legitimacy,” in reference to Libya.

Erdogan told journalists July 17 that Egyptian interference in the Libyan affairs is illegitimate.

Turkey is supporting the GNA in Libya against Hifter, who in turn is backed by Egypt.

Hamdi Bakhit, a member of the parliamentary Defense and National Security Committee, concurred and told Al-Monitor over the phone that the exercises carried out by Turkey and Egypt are part of one scenario. “Each party is proving its power in the Mediterranean. Turkey’s presence in the Mediterranean waters is illegitimate and it cannot provide logistical support for its naval frigate at this distance,” he said.

Bakhit added, “The Egyptian-French training is based on coordination between the two countries to repel any maritime hostility.” He pointed to the soaring tension and state of alert between Turkey and Egypt, and said the Egyptian exercise is a response to the drills conducted by Turkey in the eastern Mediterranean, especially in light of the tensions regarding Libya.

Turkish presidential spokesman Ibrahim Kalin said in statements carried by the official Turkish Anatolia news agency July 24 that his country wants a fair distribution of all natural resources in the eastern Mediterranean, also warning that deploying Egyptian forces in Libya would be a dangerous military adventure.

In an interview with the Turkish channel NTV July 20, Kalin stressed that his country does not seek escalation of tensions in Libya, denying any intention by Ankara to get in a confrontation with Egypt, France or any other country on Libyan soil.

Tarik Fahmy, professor of political science at Cairo University, told Al-Monitor, “What Turkey has done in the Mediterranean is not a comprehensive training or maneuver. It is rather a naval redeployment of its forces as part of Ankara’s anticipation of any confrontation.”

He added, “Cairo responded within two days to this Turkish deployment by conducting the joint naval training with France. Both sides are raising their state of alert ahead of any possible scenario at this time.”

Fahmy concluded, “These exercises are not a show of strength, they carry strategic messages.”