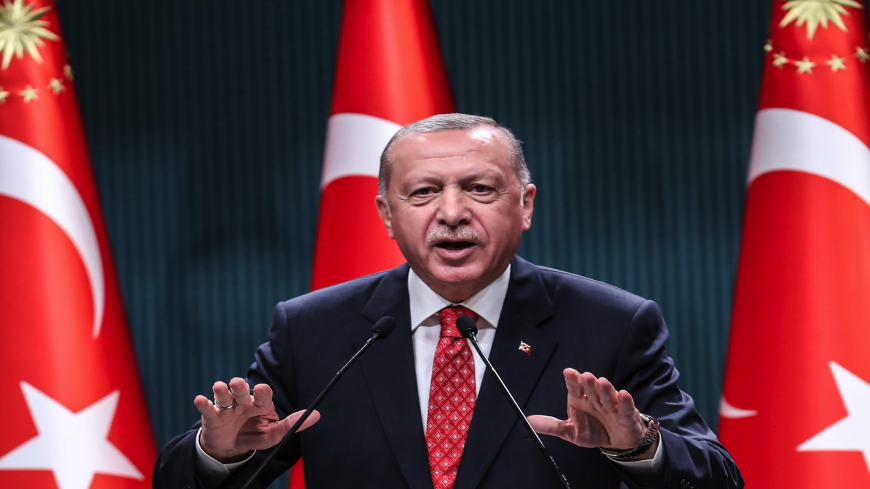 Turkish President Recep Tayyip Erdogan speaks to members of the press after a cabinet meeting at the Presidential Complex in Ankara on August 10, 2020. - Turkish President Recep Tayyip Erdogan called for dialogue while still pushing ahead with a contentious Mediterranean gas development plan that has outraged Greece and alarmed NATO and the EU. (Photo by Adem ALTAN / AFP) (Photo by ADEM ALTAN/AFP via Getty Images) -

Tensions in the eastern Mediterranean took a dangerous new turn on Aug. 13 as Turkish President Recep Tayyip Erdogan ramped up his hawkish rhetoric against Greece.

Speaking at a meeting of his ruling Justice and Development Party (AKP), Erdogan said Turkey had warned Greece that if it were to attack a Turkish seismic research ship deployed off a small Greek island, it would “pay a heavy price.” Erdogan said Greece had “received its first response.” He did not elaborate.

His comments followed reports cited by the Financial Times that a Greek navy warship had been shadowing the Turkish vessel.

The Oruc Reis, escorted by Turkish warships, entered contested waters off the southern coast of the Greek island of Kastellorizo on Aug. 10, marking a further escalation in the maritime dispute between Turkey on the one hand and a bloc comprising Greece, Cyprus, Egypt, Israel and now France on the other hand.

For all of Erdogan’s grandstanding, Ankara was looking increasingly isolated today amid game-changing news that its regional arch-foe, the United Arab Emirates (UAE), was on the path to establishing diplomatic ties with Israel and that its NATO ally France had deployed warships to disputed waters in the eastern Mediterranean in support of Greece.

France's move came after a phone call Wednesday between French President Emmanuel Macron and Greek Prime Minister Kyriakos Mitsotakis. The Elysee Palace said in a statement that France was going to “temporarily reinforce” its military presence in the eastern Mediterranean so as to “better monitor” the area and ensure that “international law is respected."

Macron chimed in with a series of tweets in Greek. He called the situation in the eastern Mediterranean “alarming” and accused Turkey of provoking tensions through “unilateral moves” in “matters of oil exploration.” Mitsotakis warned in a television address that the risk of “an accident” was growing in the eastern Mediterranean as the number of military assets there grew.

Two of France’s Rafale fighter jets will be based on the Greek island of Crete in line with Macron’s plan. French and Greek ships conducted a joint naval maneuver off the coast of the island today.

Erdogan vowed today that “no foreign nation, company or ship will be allowed without [prior] permission into our maritime areas.” In a thinly veiled swipe at France, he added, “We are seeing provocations by a country that has no coastline in the eastern Mediterranean pushing Greece and Cyprus to take wrong steps.”

Turkey’s increasingly assertive stance in the eastern Mediterranean is borne from its long-running argument that, as the country with the longest Mediterranean coastline, it needs to be consulted or be a party to any agreement related to exploiting the sea’s natural gas riches.

Turkey’s maritime claims predate Erdogan, who has governed Turkey since 2002. But his desire to hold on to power may be what’s driving his country’s growing appetite for military risk. Recent polls show that support for Erdogan and the AKP is waning as the country faces a brewing economic storm compounded by the impact of the COVID-19 pandemic. Whipping up nationalist sentiment is seen as an antidote.

Marc Pierini, a former EU ambassador to Turkey and Libya and a visiting scholar at Carnegie Europe, said Macron’s actions were designed to “resist Erdogan in this situation,” and the French president was “not alone” within the EU in his desire to push back against an increasingly aggressive Turkey.

Pierini told Al-Monitor in a telephone interview that the “European way of doing things is fixing problems through negotiations,” but that Erdogan’s way was to dictate the terms, and when Turkey’s actions did not fall within existing laws and boundaries, it “invented new ones.”

“It's never going to work,” he predicted. Pierini was referring in particular to Libya, where Turkey intervened militarily on behalf of the UN-recognized Government of National Accord (GNA) against the eastern warlord Khalifa Hifter, who is backed by Egypt, Russia, the UAE and, to a lesser degree, France.

In fact, so far Turkey has reaped the dividends of its muscle-flexing in part because until recently nobody had stood in the way. Turkey’s military support, which saw Hifter calling off his yearlong campaign to capture Tripoli, wasn’t for free. The GNA signed a maritime accord with Ankara in December, creating an exclusive economic zone (EEZ) from Turkey’s southern Mediterranean shore to Libya’s northeast coast. Greece called the deal unlawful, expelled the Libyan ambassador and has since been seeking to drum up regional support for its stance.

Libya is also where Turco-French tensions first spilled into full view. France pulled out of NATO’s Operation Sea Guardian to enforce an arms embargo on Libya’s warring parties after accusing Turkish warships of targeting its own ship off the Libyan coast on June 10. The Turkish ships were escorting a Tanzanian-flagged cargo vessel that Turkey insists was carrying medical supplies to Libya. The French ship wanted to inspect it to see whether it was carrying arms. Turkey refused. Shots were nearly fired by both sides before the French ship retreated.

Macron has since demanded that the EU slap sanctions on Turkey over its actions in Libya and the eastern Mediterranean, though he has not specified what form these should take and there’s no sign yet that the EU will oblige. Turkey’s talks for full membership of the bloc are stalled anyway.

For France, news of rapprochement between its close regional ally the UAE and Israel is clearly welcome as it faces off with Turkey in the region. “As the eastern Mediterranean flares up and as several countries gang up against Turkey, the Paris-Abu Dhabi duo is emerging as a tight alliance,” observed Jalel Harchaoui, a Libya expert at the Clingendael Institute. In emailed comments to Al-Monitor, Harchaoui added, however, that the pair had yet to show any “compelling results” in the Sahel, Libya or Yemen, where their intervention had ranged “between mediocre to disastrous.”

France has over 5,000 forces deployed in the Sahel to fight jihadi groups in Niger and Mali. At least six French aid workers were killed in Niger at the weekend in a suspected jihadi attack.

The UAE is backing southern separatists in Yemen against the internationally recognized Yemeni government, who gave up on self-rule in late July.

Erdogan relayed his grievances about France and Greece to European Council president Charles Michel today. According to Ankara, he reiterated Turkey's determination “to protect its rights against initiatives ignoring Turkey’s rights.” Erdogan also told Michel that Turkey was in favor of resolving the standoff through “dialogue and negotiation.”

German Chancellor Angela Merkel, who has been seeking to defuse the crisis, spoke separately with Erdogan and Mitsotakis today. There were no details of either conversation as Al-Monitor went to press. Merkel had a hand in getting Turkey and Greece to sit down for informal talks on maritime delimitations. But these broke down last week when Greece announced that it had signed its own EEZ with Egypt for the eastern Mediterranean a day after Turkey said it would halt its exploration activities in a gesture of goodwill. The zone staked out by Greece and Egypt overlaps with that agreement between Turkey and Libya, feeding further fuel to the flames. Turkey called the Greco-Egyptian accord “null and void.”

The diplomatic maneuvering was in full swing today as Greek Foreign Minister Nikos Dendias met with his Israeli counterpart, Gabi Ashkenazi, and Israeli Prime Minister Benjamin Netanyahu to seek the Jewish nation’s support for Greece in its maritime dispute with Ankara.

Israel had already made its position clear when Turkey dispatched the Oruc Reis and its naval escorts. ”Israel is following closely as tension rises in the eastern Mediterranean. Israel expresses its full support and solidarity with Greece," read a statement from the Israeli Foreign Ministry.

Well-placed Israeli sources speaking to Al-Monitor on condition of anonymity said Israel’s icy relations with Turkey were unlikely to thaw for as long as Erdogan remains in power. Yet as recently as 2017, the two countries were in serious talks to build a pipeline to carry Israeli natural gas via the eastern Mediterranean to Turkey and eventually to Europe. The project collapsed after Erdogan decided, for yet unknown reasons, to pull the plug.