Turkey entrenches further into Libya as rivals strike back

Ankara is set to deepen its military intervention on the side of Libya’s Government of National Accord as it asserts dominance in the gas-rich eastern Mediterranean and drums up domestic support for the ruling party. 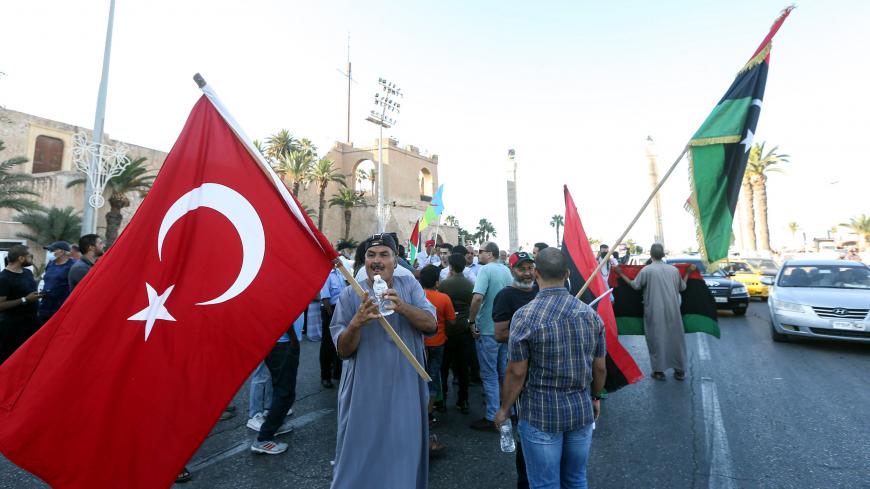 People wave flags of Libya (R) and Turkey (L) during a demonstration in Martyrs' Square in the center of the Libyan capital Tripoli, currently held by the UN-recognized Government of National Accord, on June 21, 2020. - MAHMUD TURKIA/AFP via Getty Images

Turkey’s government has signaled that its military intervention on the side of Libya’s internationally recognized Government of National Accord (GNA) will deepen, part of a broader campaign to assert dominance in the gas-rich eastern Mediterranean and to bolster flagging support at home.

President Recep Tayyip Erdogan’s communications office announced via Twitter late Sunday that Libya’s largest airbase, Al Jufra, and the coastal city of Sirte will be among its next targets. Both are controlled by the GNA’s Libyan National Army (LNA) foes led by the eastern warlord Khalifa Hifter.

It listed seven reasons both targets were strategically important, among them control over oil supply lines, the presence of Russian military aircraft and that of mercenary forces from the Kremlin-backed Wagner Group. The message was clear: Turkey will not be deterred from achieving its goals in the energy-rich country.

The tweet followed an air attack on al-Watiya airbase in western Libya, the base wrested by Turkish-backed GNA forces from Hifter in May. Its fall marked the start of the rapid collapse of Hifter’s 14-month campaign to capture Tripoli.

The timing of the raid suggests that the LNA’s top allies — the UAE, France, Egypt and Russia — are not about to back down either. Just hours earlier, Turkey’s Defense Minister Hulusi Akar, flanked by the Turkish Chief of Staff Yasar Guler, met with Turkish officers in Libya and inspected a Turkish warship anchored off the Libyan coast.

The conventional theory is that the airstrikes were probably carried out by UAE fighter jets, part of an alleged pattern of covert targeting by Emirati drones and aircraft in support of Hifter’s failed campaign to take Tripoli.

The extent of the damage remains unclear. An LNA official claimed nine targets were hit. The Turkish Defense Ministry said some systems had been affected but did not elaborate. “Was it a military setback? No. But in terms of principle, it was a huge accomplishment,” argued Jalel Harchaoui, a Libya watcher at the Clingandael Institute in The Hague. “The idea that the Turks could send their defense minister to Tripoli, to parade there as if it owns the place, to organize meetings with Turkish officers before everybody’s eyes, all those things are very provocative,” and to have done so before al-Watiya was fully secured all “show an extraordinary level of self-assurance,” Harchaoui told Al-Monitor in a telephone interview.

Given its complex nature, the possibility that France provided intelligence for the operation “is real,” he added.

Tensions have been rising between Turkey and its fellow NATO member France over drilling rights in the Eastern Mediterranean and now over Libya, causing more cracks in the Western alliance.

France suspended its role in NATO’s Operation Sea Guardian after accusing of Turkish warships of targeting its own ship off the Libyan coast on June 10.

The Turkish ships were escorting a Tanzanian-flagged cargo vessel that Turkey insists was carrying medical supplies to Libya. The French ship wanted to inspect it to see whether it was carrying arms. Shots were nearly fired by both sides before the French ship retreated. NATO has launched an investigation. Turkey is demanding an apology from France. Turkish Foreign Minister Mevlut Cavusoglu repeated the demand today during a tense news conference with EU foreign affairs chief Josep Borrel in Ankara today. Cavusoglu accused France of “lying” about what had happened in the Mediterranean.

Marc Pierini, a former EU ambassador to Turkey and Libya and a visiting scholar at Carnegie Europe, aired skepticism over Ankara’s version of events. “If it was a humanitarian delivery, do you really need three frigates to escort it?” he asked. “Those interested have satellite imagery of when and where the cargo ship was loaded. It was a cargo of armored vehicles and missiles. Nobody believes the Turkish narrative,” he told Al-Monitor in a telephone interview.

But even as it insists on its neutrality in the Libyan conflict, France has been silently backing the UAE, which in turn has been busting the UN arms embargo on Libya in support of Hifter, for years. The UAE is “the ideal Muslim friend” for France, argued Harchaoui. “It's Arab, it's Sunni, it's rich, willing to spend a lot of money and willing to violate international law. For France, if you attach yourself to the UAE, you attach yourself to success.”

Hifter’s humiliating retreat from Triplolitania indicates otherwise, but the war is far from over. The Emiratis are bent on bogging Turkey down the best they can. For France, Libya is of critical importance because of jihadi terrorism in the Sahel region that poses a direct threat to Europe.

Turkey’s injection of Sunni Syrian rebels-turned-mercenaries into the conflict may help it and Russia “get rid of” radical elements in Syria’s Idlib, but the risk that they may melt into illegal immigrants making their way to Europe is an immediate worry, noted Pierini.

Turkey stole a march on its rivals in late November when it signed a maritime deal with Libya establishing an exclusive economic zone from Turkey’s southern Mediterranean shore to Libya’s northeast coast. In exchange, Turkey agreed to provide military assistance to the Muslim Brotherhood-friendly GNA. The accords signed with Libya’s UN-recognized government bestow on Turkish intervention a legitimacy that none of its opponents has. Russia, despite being on the opposite side, has displayed zero interest in openly confronting Turkey and for all its bluster nor has Egypt. Qatar continues to help bankroll Turkey's actions in support of the Muslim Brotherhood across the region. And the lack of US engagement has made Libya a free for all.

The regional muscle-flexing is also proving increasingly popular at home. A recent survey by the Ankara-based Metropoll seen by Al-Monitor showed that almost 60% of those polled in June said they support Turkey’s military intervention in Libya compared with about only 35% in January.

But then the same poll suggested that if elections were held today, Erdogan would get a mere 25% while his Justice and Development Party would garner only 30%, the lowest score since they came to power in 2002.

Economic decline marked by rising youth unemployment, the depreciation of the Turkish lira and lower growth, all compounded by the COVID-19 pandemic, is the main reason for their sagging popularity. “When the economy is in trouble, a show of force is a very good thing,” said Pierini.