Diplomatically isolated and economically weak, Turkey is seeking to repair relations with its regional foes. But it's no easy task. 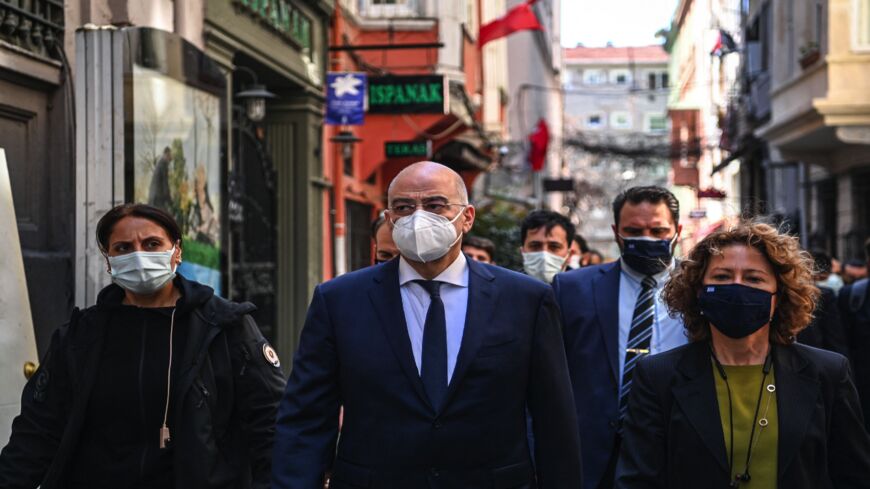 Greece's Foreign Minister Nikos Dendias (C) walks on Istiklal Avenue after his meeting with the Patriarch of Constantinople at the Greek Consulate in Istanbul on April 14, 2021. - OZAN KOSE/AFP via Getty Images

Turkey’s multipronged diplomatic charm offensive to fend off EU sanctions and repair bruised ties with Egypt and Greece are shifting into high gear, with mixed results.

Turkish Foreign Minister Mevlut Cavusoglu announced Thursday that a delegation led by his deputy would travel to Egypt in early May at Cairo’s invitation, signaling a breakthrough in Ankara's recent efforts to mend ties with Egyptian President Abdel Fattah al-Sisi. Cavusoglu delivered the news before meeting with Greek Foreign Minister Nikos Dendias together with Turkish President Recep Tayyip Erdogan. Dendias' visit, the first in two years by a senior Greek official, follows months of spiraling tensions between the two NATO allies over maritime boundaries and energy exploration rights in the Eastern Mediterranean. It’s the highest level visit by a Greek official in the past two years and came at Ankara’s request.

At a joint news conference, Cavusoglu said the ministers had agreed to meet in Geneva at the end of the month, presumably on the sidelines of UN-sponsored peace talks on Cyprus that are scheduled to be held in the Swiss city April 27-29. Dendias invited Cavusoglu to Athens, saying there was “significant scope for an improvement in bilateral ties” provided there is “a de-escalation of incendiary actions and comments.”

It didn’t take long for the minister to ignore his own advice. He lashed out at a maritime deal between Turkey and Libya and challenged Cavusoglu’s reference to Greece’s “Turkish minority,” snapping, “There’s only one minority and that is the Muslim minority.”

Cavusoglu, in turn, lashed out at Greece for rejecting thousands of migrants and “pushing them into the sea.” Dendias had made “some extremely unacceptable allegations against my country,” he complained.

In recent months, faced with the threat of economic sanctions from the EU, Turkey has in fact been toning down its hawkish rhetoric toward Greece and pulled back drill ships from contested waters. Diplomatically isolated and beset with a host of economic woes, Erdogan has also sent out feelers to Israel, Saudi Arabia, Egypt and the United Arab Emirates. For now, it’s more damage control than a substantive shift.

Ankara faced a further setback amid news that the foreign ministers of Israel, Greece, Cyprus and the UAE would be meeting Friday in Cyprus to promote regional and strategic interests between them in a newly formed regional forum.

Turkish and Greek diplomats have resumed exploratory talks since January after a five-year hiatus to discuss their differences. The de-escalation was applauded by the EU, whose top leaders, EU Council president Charles Michel and EU Commission president Ursula van der Leyen, met with Erdogan in Ankara on April 6. The gathering was overshadowed by the so-called “sofagate” scandal but the results were encouraging for Erdogan. He got pledges to update a critical 1995 trade agreement with the EU, and EU funding for Turkey’s estimated 4 million refugees in exchange for keeping them out of Europe will continue.

“Turkey is currently following a two-fold strategy in the broader Eastern Mediterranean. Both the talks with Greece and the developments in the Cyprus process aim to appease the EU, advance Turkish-EU relations, and increase the chance of economic rewards for Turkey,” said Zenonas Tziarras, a researcher at the PRIO Cyprus Center, an independent think tank in Nicosia. He was referring to UN-led talks on reunifying the Mediterranean island, which has remained divided since Turkey’s 1974 military intervention to protect Turkish islanders against Greek violence.

“On the other hand,” Tziarras continued, “Ankara is trying to use the normalization of these relations in a subversive way, namely to undo the network of cooperation that has emerged between Cyprus, Greece, Israel, Egypt, and other Mediterranean and Middle Eastern countries.”

“By restoring individual relationships with some of these states, Turkey is hoping to weaken its cohesion and participate in the regional security architectures as an agenda-setter more effectively,” he added.

There is little doubt that growing military and economic ties between the aforementioned countries is deeply unsettling for Ankara. But that’s not to say Ankara hasn’t a strong hand, particularly when it comes to Libya, and that’s why Egypt may be taking the bait. Turkey’s muzzling of pro-Muslim Brotherhood TV channels based in Istanbul provides Egyptian strongman Sisi with domestic cover for the thaw. However, strategic calculations in Libya impel Cairo to bury the hatchet with Ankara and reach an accommodation in the energy-rich North African state.

“In 2013-2017, Libya was a venue for an ideological contest against political Islam,” one that pitted Turkey and Qatar against Egypt and the United Arab Emirates, observed Jalel Harchaoui, a senior fellow at the Global Initiative against Transnational Organized Crime. “But now Egypt is busy struggling with palpable security and economic problems, domains that the UAE typically neglects,” he said. “Cairo must now have its own realistic foreign policy, anchored in concrete considerations. Egypt is realizing it is its own man; it cannot rely on any ‘big brother’ whether it be Abu Dhabi or anyone else,” Harchaoui contended.

The UAE’s actions in Libya, notably its support for the eastern warlord, retired Libyan Gen. Khalifa Hifter, and his disastrous attempt to take Tripoli, harmed Egyptian interests and “opened a wide avenue for Turkey to be much more deeply entrenched, and Hifter is grappling with increasing instability in eastern Libya,” with potential spillover effects for Egypt. “Turkey’s presence is a military, political and economic reality that only persistent subversion and sabotage can undo over a long period of time. Why go down that route?" he said.

Libya’s new interim prime minister, Abdul Hamid Dbeibeh, is extremely close to Ankara. In his first official visit to Ankara April 12, he pledged to uphold a controversial maritime boundary accord to establish an exclusive economic zone between the two countries, which Greece and Cyprus call illegal.

Greece is now seeking to establish good relations with Dbeibeh in a bid to outmaneuver Ankara. Chair of Libya’s Presidential Council Mohammed al-Menfi met with Greek Prime Minister Kyriakos Mitsotakis April 14 and agreed on the “immediate resumption” of bilateral talks on demarcating their Mediterranean Sea borders.

The visit follows an April 6 meeting between Dbeibeh and the Greek premier in Tripoli, where the latter reopened the Greek Embassy. All of this “points to a new round of Greek-Turkish antagonism in the Eastern Mediterranean and North Africa,” Tziarras said. “Erdogan’s efforts to court Greece and create the prospect for a meeting with Mitsotakis is about fabricating a virtual momentum that will allow him to bypass meaningful moves at the negotiating table even as he signals the EU,” he added.

Thursday’s outbursts suggest that such momentum currently does not exist.