Ankara is establishing a clear path to fulfill its eastern Mediterranean energy ambitions through an maritime boundary agreement with Libya’s internationally recognized government. 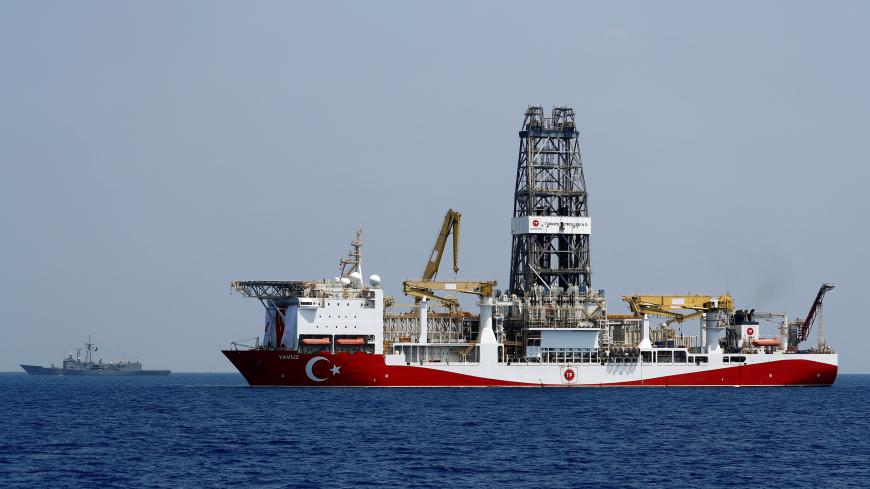 Ahead of this week’s NATO summit in London, fresh developments in the eastern Mediterranean Sea will likely add to a long list of tensions between Turkey and allied nations as the bloc celebrates its 70th anniversary.

On Nov. 27, Ankara signed an agreement with Libya’s internationally recognized government denoting new maritime boundaries between the two nations. The area spanning from southwest Turkey to northeast Libya cuts across a zone currently claimed by Greece and Cyprus, where plans for a future gas pipeline are in the works to link eastern Mediterranean gas fields with European markets.

The agreement comes as Turkish ships continue gas exploration and drilling activities within Cyprus' territorial waters, actions Ankara claims are necessary to ensure gas revenues are shared between the Republic of Cyprus and the Turkish Republic of Northern Cyprus, which is recognized solely by Turkey. The latest move further escalates tensions between the nations, which hold conflicting claims over the development of eastern Mediterranean energy resources.

Jalel Harchaoui, a research fellow specializing in Libya at the Clingendael Institute, said Turkish officials were likely reacting to their nation’s isolation from ongoing energy developments in the region following the establishment of the Eastern Mediterranean Gas Forum earlier this year between the Republic of Cyprus, Greece, Israel, Jordan, Palestine, Egypt and Italy.

“Turkey is deeply interested in defending its own interpretation of territorial-waters law,” Harchaoui told Al-Monitor. “For that, Turkey needs — in order to bolster its own legal and rhetorical discourse on the international stage — a partner other than Northern Cyprus. That is what Turkey expects of the Government of National Accord in Tripoli.”

Harchaoui said Ankara was seeking a precedent for future developments in the eastern Mediterranean, as Turkish officials have repeatedly signaled gas exploration activities would continue despite a growing threat of sanctions from the European Union regarding such actions.

"It is not possible to carry out projects in the region by excluding a country with long maritime boundaries in the Eastern Mediterranean," said Turkish President Recep Tayyip Erdogan at the opening of the TANAP gas pipeline on Saturday. He added, "We will not withdraw [our] ships and they will continue to operate there."

During a meeting last week between Erdogan and Fayez al-Sarraj, the prime minister of the Tripoli-based Government of National Accord (GNA), the pair signed several memorandums of understanding demarking the new maritime boundaries. Ankara has backed the GNA with military support as the Tripoli government continues to fight forces directed by east Libyan commander Khalifa Hifter, who leads the Libya National Army with backing from Egypt, Saudi Arabia and the United Arab Emirates.

In July, Ankara’s support for the GNA drew a backlash from Hifter’s forces, who briefly took six Turkish sailors hostage. Following the maritime border agreement, the eastern Libyan parliament’s foreign and international cooperation committee released a statement Thursday saying the deal amounted to a “defense pact,” claiming it would grant Ankara the right to use Libyan airspace and territorial waters, potentially allowing Turkey to build military bases on Libyan land.

In a statement on Monday, Turkish Ministry of Foreign Affairs spokesperson Hami Aksoy defended the agreement, saying it was in accordance with “international law, including the relevant articles of the United Nations Convention on the Law of the Sea.”

“Through this agreement with Libya, the two countries have clearly manifested their intention not to allow any fait accompli,” Aksoy said, referring to plans excluding Turkey from eastern Mediterranean gas developments that would deny the nation and possibly the TRNC lucrative transit revenues.

Critics of the proposed eastern Mediterranean pipeline have long said the project, which would extend an underwater connection between Cyprus and the Greek island of Crete, would be too costly and technologically complex to transport gas from the eastern Mediterranean to European markets in a financial feasible manner.

In an interview with Al-Monitor, Sedat Aybar, head of the Africa Research Center at Istanbul Aydin University, said, “The most cost-effective way of transporting natural gas to Europe would be overland through Turkey.” He added, “In this sense, bypassing Turkey does not [align] with economic rationality but is outright hostile.”

Still, officials in Greece and the Republic of Cyprus have maintained their unwillingness to collaborate on a joint pipeline through Turkey, citing Ankara’s ongoing gas exploration activities, which they claim are complicating long-stalled reunification talks in Cyprus.

The island has been divided since a Turkish military operation in 1974. About 40,000 Turkish troops remain in the TRNC to, Ankara claims, defend the rights of ethnic Turkish citizens.

In reaction to the Turkey-Libya agreement, Greek Foreign Minister Nikos Dendias visited Cairo Sunday to hold talks with his Egyptian counterpart Sameh Shoukry. Following the meeting, Dendias said the pair agreed GNA leader Sarraj “probably lacks the necessary legitimacy to sign these memorandums," but "They function as destabilizing factors for the wider region.”

Dendias also signaled the he would seek to accelerate discussions between Greece and Egypt on the delimitations for exclusive economic zones between the two nations. Meanwhile, Greek Prime Minister Kyriakos Mitsotakis said Sunday he would seek support from NATO allies during this week’s London summit against Turkey’s attempts to encroach on Greek sovereignty.

The plea comes against the backdrop of Turkish officials reportedly refusing to back a NATO defense plan involving Baltic states and Poland unless they receive more support for ongoing military operations against Kurdish militants in northeast Syria. On Monday, unnamed Turkish security sources denied allegations Ankara was “blackmailing” NATO.

Summing up the Turkey-Libya agreement, Harry Tzimitras, director of the Peace Research Institute Oslo Cyprus Centre, said Ankara was “upping the stakes” in the region by bringing a new player into the competition for resources. He added the move poses significant obstacles for EU officials as Turkey is no longer acting alone in its energy policy and repercussions would now need to involve Tripoli.

“It’s now about Greece, about Cyprus, about Syria, about the areas where [Turkey] hadn’t really projected power before, like south of Crete,” Tzimitras told Al-Monitor.

He also noted that the agreement shows at least one Libyan administration “is willing to choose a side," saying, "I think this is in reaction to the alliance between Cyprus, Greece and Egypt. So, in a sense, it’s introducing a new dimension into the power game of the EastMed.”