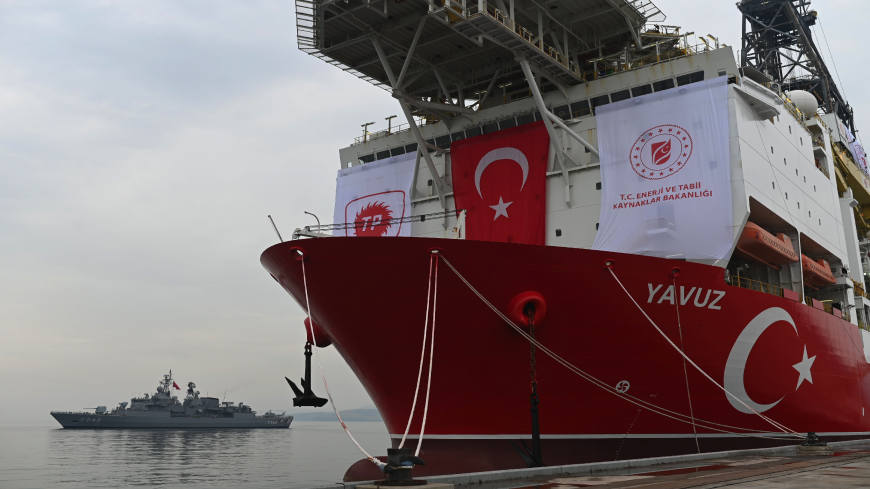 A picture taken at the port of Dilovasi, outside Istanbul, on June 20, 2019, shows the drilling ship 'Yavuz' scheduled to search for oil and gas off Cyprus, next to a warship. - BULENT KILIC/AFP via Getty Images

ISTANBUL ­— Greek armed forces were placed on high alert Tuesday after a Turkish ship began seismic surveying activities near the Greek island of Kastellorizo that will continue until Aug. 2.

The Turkish navy announced the development through a NAVTEX advisory Tuesday, setting off a potentially dangerous escalation between the two nations that have for years held overlapping territorial claims in the eastern Mediterranean Sea.

The Greek Foreign Ministry issued a statement Tuesday, calling on Ankara to “immediately cease the illegal activities” that it said violated the nation’s sovereign rights. On Wednesday, the Turkish Foreign Ministry rejected the assertions, saying the Oruc Reis survey ship was operating within Turkey’s continental shelf.

“Greece bases this claim on the presence of remote islands far from its own mainland, most notably Kastellorizo,” Turkish Foreign Ministry Spokesperson Hami Aksoy said in a statement Wednesday. “This maximalist continental shelf claim of Greece is contrary to international law, jurisprudence and court decisions.”

The dispute is the latest episode in decadeslong tensions between Greece and Turkey over maritime borders in the eastern Mediterranean, where Ankara has been pursuing controversial gas drilling activities near Cyprus over the last year.

While Turkish officials say the activities are conducted to ensure the natural resource rights of both Turkey and the Turkish Republic of North Cyprus (TRNC), Greek officials have increasingly sought support from European Union states to impose “crippling” economic sanctions on Ankara for what they deem to be infringements on Greek and Cypriot territories.

The most recent escalation comes after high-level talks were held in Berlin last week between Turkish and Greek officials. Though German Foreign Minister Heiko Maas condemned ongoing gas exploration activities Tuesday, calling on Ankara to stop “provocations” in the eastern Mediterranean, analysts say Turkish officials are pursuing such tactics to gain leverage in future negotiations over maritime delineations with Greece, which Ankara view as unfair.

“The goal is to force negotiations,” Sinan Ulgen, chairman of the Istanbul-based think tank Center for Economics and Foreign Policy Studies, told Al-Monitor.

He said that to some extent this goal is being achieved, as evidenced by last week’s Berlin talks.

“It is true that these hard power tactics have given Turkey an advantage … but Turkey also needs to learn to capitalize on this advantage by prioritizing the diplomatic track,” Ulgen said. “The risk is not knowing where to stop with the hard power game.”

The developments come after the Israeli government ratified plans for the EastMed undersea pipeline project Monday. Despite doubts over the project’s financial feasibility amid falling gas prices, the pipeline would seek to export regional gas to European markets and is being pursued by a consortium of nations including Egypt, Cyprus and Greece, but excludes Turkey.

Ozgur Unluhisarcikli, Ankara director for the German Marshall Fund, said Ankara officials view Turkey’s exclusion from eastern Mediterranean energy developments as a hostile attempt to contain the nation within its own region.

“In response to this containment policy, Turkey is upping the game by exploring for gas in the eastern Mediterranean,” Unluhisarcikli told Al-Monitor.

Over the last decade, Unluhisarcikli said Ankara sought to address preexisting maritime border rows with Greece as well as those between the Republic of Cyprus and the TRNC — which has been occupied by Turkish troops since a 1974 military operation — but failed to reach agreements before the development of offshore gas fields in the region.

As a result, he said Ankara has taken “its own maximalist approach” in response to deadlocked negotiations with neighboring states.

“Turkey’s game plan is disruption,” Unluhisarcikli said. “Turkey wants to make it impossible for others to export the gas … so that at the end of the day, everyone will have to sit down at a negotiation table."

A new dimension to territorial spats came in November 2019, when Ankara signed a memorandum with the UN-recognized Tripoli government led by Fayez al-Sarraj in Libya delineating a shared maritime boundary between the two states, encroaching on areas claimed by Greece south of Crete.

Since then, Ankara has increased military support for Sarraj in the ongoing Libyan conflict, where it has helped break a siege on Tripoli and is likely to maintain significant influence after news Wednesday that Turkey was considering a cease-fire agreement with Russia, which backs eastern Libyan forces loyal to Gen. Khalifa Hifter.

“Unfortunately, every day that passes sees new problems being added, which means that even a possible solution would probably have to be a package deal,” Tzimitras told Al-Monitor.

Amid the multilayered tensions, Tzimitras said Greece would likely seek to preserve the status quo for the foreseeable future, but called for increased diplomatic efforts between all actors, saying, “I’m not quite sure if the status quo is sustainable now that Turkey has started showing very concrete acts of a revisionist nature.”

He added, “There is a military buildup at the moment. Dialogue should be the only way forward because a military engagement can only be a lose-lose for everyone involved.”