Following escalations Aug. 10 between Turkey and Greece over contested areas of the eastern Mediterranean, Ankara officials said they would issue new exploration licenses in the region this month. 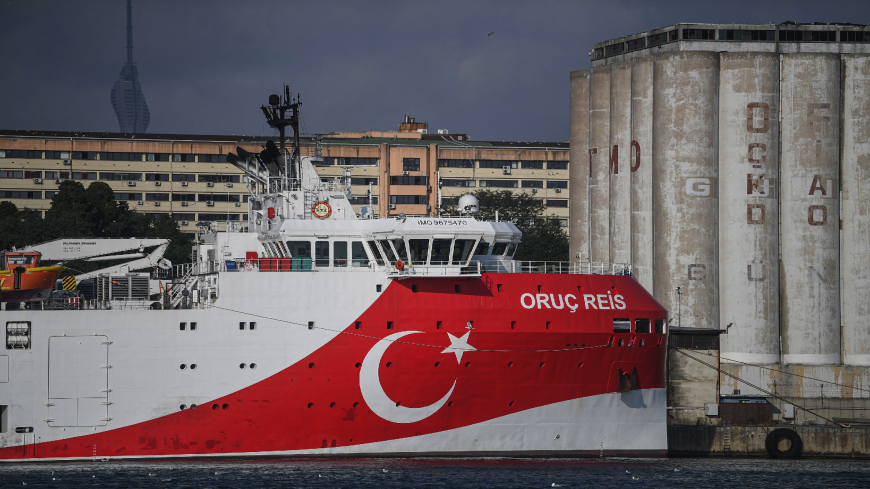 ISTANBUL — A cycle of escalation is in full swing in the eastern Mediterranean, where a Turkish seismic research ship escorted by Turkish naval vessels entered waters contested by Greece on Aug. 10.

The ship, Oruc Reis, arrived to conduct energy exploration activities south of the Greek island of Kastellorizo until Aug. 23, sparking tensions with officials in Athens who claim the region is part of Greece’s continental shelf.

Greek Foreign Minister Nikos Dendias called on Turkey Aug. 11 to leave the area “immediately,” stating there would be “no tolerance” for the actions. But his Turkish counterpart, Mevlut Cavusoglu, doubled down on Ankara’s stance, saying new gas exploration and drilling licenses would be issued for the region this month.

“Our determination is unfaltering here,” Cavusoglu told reporters at a press conference in Azerbaijan Aug. 11. “We will not compromise in any way from this.”

The developments come after informal talks over maritime delimitations broke down last week between Athens and Ankara after Greek officials signed an agreement with Egyptian counterparts Aug. 6 demarcating shared boundaries in the eastern Mediterranean.

The Greece-Egypt agreement contradicts previous territorial claims outlined in a November memorandum between Ankara and Tripoli’s Government of National Accord in Libya. Now the crisscrossing claims have materialized in a potentially dangerous standoff between Turkey and Greece, as both nations’ navies are on high alert in the region.

“Greece demonstrated that she is not sincere and honest about dialogue with a pirated agreement concluded with Egypt on Aug. 6,” Turkey's Foreign Ministry said in a statement Aug. 10. “Through this agreement, the continental shelves of both Turkey and Libya in the eastern Mediterranean have been violated.”

Comparing the overlapping claims in the eastern Mediterranean to a Venn diagram of sorts, Michael Tanchum, a senior fellow at the Austrian Institute for European and Security Policy, said international mediation would be necessary to de-escalate tensions and bring both Turkish and Greek officials back to the negotiating table to sort out border disagreements.

"What we have now is probably the highest risk situation for miscalculation or accidents that we’ve had in recent years,” Tanchum told Al-Monitor.

The core of the dispute centers on Greece’s many islands, which Athens officials claim afford the nation sovereign rights over large tracts of the Mediterranean, including areas where islands such as Kastellorizo sit only a few kilometers from Turkey’s coast.

Ankara officials have long disputed such claims, instead proposing Turkey’s continental shelf should take precedence in delineating maritime boundaries, diminishing some of the territories currently held by Greece’s easternmost islands under the UN Convention of the Law of the Sea, to which Turkey is not a signatory.

“A lot of what has been claimed as legality is political symbolism and setting of geopolitical markers,” Tanchum said.

He added, “A real dialogue would need to look at the actual topography, the line drawing … but to achieve that kind of pragmatic dialogue would require a third party with diplomatic skill, vision and the resources to commit to keeping the parties together for serious negotiations.”

Informal negotiations were underway in July following a prior escalation between Turkey and Greece. Prompted by a July 22 phone call between German Chancellor Angela Merkel and her Turkish counterpart, Recep Tayyip Erdogan, last month’s tensions subsided as Turkey and Athens pursued bilateral talks, but efforts were shelved on Aug. 6 with the Greece-Egypt agreement.

In response to the current escalation, Dendias asked Tuesday for an extraordinary EU Foreign Affairs Council meeting following talks with US Ambassador to Greece Geoffrey Pyatt earlier in the day. European Commission Foreign Affairs Spokesperson Peter Stano said the latest developments were “extremely worrying” Tuesday, calling on both sides to once again engage in diplomacy.

What comes next remains to be seen after previous talks faltered. Saban Kardas, an associate professor of international relations at TOBB University of Economics and Technology in Ankara, said in light of Turkey’s recent Syrian and Libyan interventions, Ankara officials have increasingly used militarized diplomacy to achieve their goals and the approach now instructs developments in the eastern Mediterranean.

“The more you use armed forces, the more you get used to it,” Kardas told Al-Monitor, saying Turkey was pursuing “coercive diplomacy” with Greece.

He added, “On the downside, it also reflects a difficulty in using other diplomatic instruments … especially in terms of coalition building. The more you rely on military assets, the more you can’t mobilize soft power.”

In a speech Monday, Erdogan maintained he was ready to “resolve conflict through dialogue on an equitable basis,” but that Turkey would continue to pursue gas exploration activities in the eastern Mediterranean “until common sense prevails on the issue.”

Some have questioned the technical feasibility for the Oruc Reis vessel to conduct seismic research in the presence of a Turkish naval fleet whose ships could impact sensor data. Yet analysts tracking developments say ongoing activities are designed to draw Greek officials back into negotiations with Ankara.

“What we are likely to see is some actions of escalation on both sides to essentially defend their own positions,” Sinan Ulgen, chairman of the Istanbul-based think tank Center for Economic and Foreign Policy Studies, told Al-Monitor. “But after a few days of escalation and a lot of political rhetoric, we’ll go back to where we were before” — to the possibility of renewed negotiations.

Turkish officials have claimed gas exploration activities are in part to defend Turkey’s maritime claims articulated in the Blue Homeland doctrine, or Mavi Vatan, which sets an ideological framework where Turkey should have greater control of regional waters. Though Cavusoglu also said Tuesday that the actions were taken to defend the resource rights of both Turkey and Turkish Cypriots, who have been in stalled talks with officials in the Republic of Cyprus over gas development projects south of the island.

While such rhetoric likely boosts domestic support for Ankara’s eastern Mediterranean policies, Ulgen said the “hard power tactics” could complicate future negotiations and restrict the menu of face-saving measures available to officials in Ankara and Athens.

“The risk is Turkey becoming hostage to its own rhetoric and not being able to budge in the negotiations,” Ulgen said. “If there’s going to be a solution to the [eastern Mediterranean issue], both Greece and Turkey will have to concede in their original maximalist positions.”

Still, Tanchum cited shared economic and transportation interests between the neighboring states as a likely incentive for both sides to de-escalate tensions in the near future.