Turkey doubles down in eastern Mediterranean after Egypt-Greece deal

The flashpoint of the power struggle in the eastern Mediterranean could shift from Libya to the seas in the coming weeks as Turkey begins new seismic research in response to an Egyptian-Greek maritime demarcation deal. 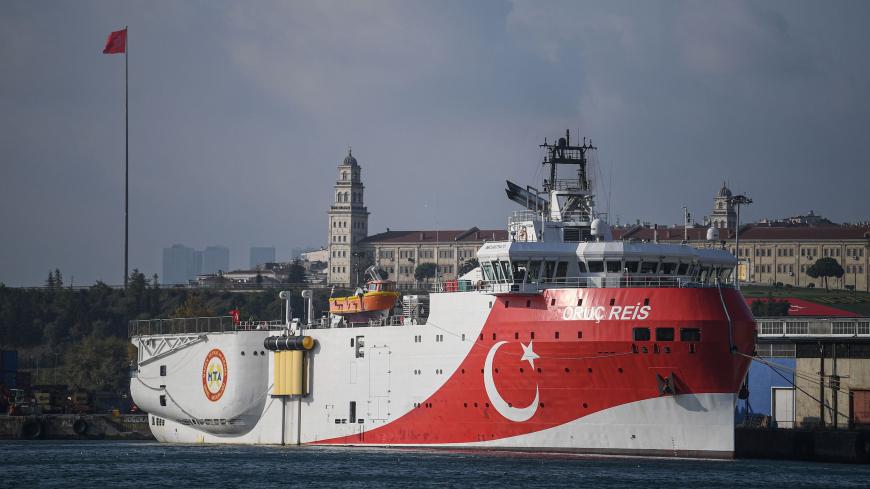 Ankara issued a navigational notice — known as Navtex — that the mission of the Oruc Reis research ship, accompanied by two logistical vessels, will continue in the eastern Mediterranean until Aug. 23, the Anadolu news agency reported. Turkish military ships are likely escorting the mission. In the past, such escorts have been comprised of two or three frigates, two or three gunboats and a couple of submarines.

The announcement is a clear sign that Turkey will attempt a controlled escalation in the eastern Mediterranean after Egypt and Greece designated an exclusive economic zone between the two countries Aug. 6, raising the stakes for Ankara in a complex standoff in which energy rivalry has become entangled with the Libyan war.

The competition over energy resources comes atop Turkey’s decades-long territorial disputes with Greece and the Greek Cypriots and political bad blood with Egypt since the overthrow of the Muslim Brotherhood government in 2013.

The Egyptian-Greek accord, which apparently caught Turkey off guard, came in retaliation to the maritime demarcation deal that Ankara signed with Libya’s Tripoli-based Government of National Accord (GNA) in November and followed the accord that Greece sealed with Italy in June on maritime zones in the Ionian Sea.

Ankara immediately dismissed the deal, stressing that the delimited area infringed on Turkey’s continental shelf. “A maritime boundary between Greece and Egypt does not exist. With respect to Turkey, the so-called maritime delimitation agreement … is null and void. This understanding will reflect on the ground and at the table,” read a Foreign Ministry statement. Turkey, it vowed, “will not allow any activity at the area in question and will resolutely continue to defend its legitimate rights and interests as well as those of the Turkish Cypriots in the eastern Mediterranean.”

The deal came as a shock in Ankara because only the week before it had stepped back from surveying the seabed in a disputed area between the Turkish coastal city of Antalya and the Greek island of Kastellorizo, known as Meis in Turkey, to allow time for diplomacy with Greece following German intervention. Spain had also sought to help defuse tensions between the two NATO allies.

Hawks in Ankara were incensed that the mission of the Oruc Reis had been suspended in favor of exploratory talks with Greece. They seem to have quickly achieved what they wanted as the vessel and the two accompanying ships left the Antalya port on the morning of Aug. 10.

Retired Adm. Cem Gurdeniz — credited as the brains behind the Blue Homeland concept that calls for a more assertive Turkish posture on maritime rights — had argued that the suspension was a blunder. “Greece fooled us. It turns out they were negotiating with Egypt while blinding us with fairy tales about talks,” he said.

The Oruc Reis returned to action amid a tense atmosphere in Ankara, marked by a prevailing conviction that halting the vessel’s mission in response to German and Spanish mediation was a mistake and that Turkey should press ahead with controlled escalation in the contested zones to demonstrate strength and resolve.

The move is likely to bear on the conflict in Libya, where Egypt has backed the eastern forces fighting the Turkish-backed GNA. In other words, the flashpoint of the power struggle between Turkey and Egypt could shift from Libya to the sea, where Turkey risks facing an expanded bloc involving Greece.

A critical strategic question is whether Greece and Egypt will mount joint diplomatic and military efforts to counter Turkey or act separately. Since Greece emerged as an independent actor in the region in the 1820s, the eastern Mediterranean has never seen an active Greek-Egyptian military alliance against Turkey.

In the past six years, Egypt has made notable efforts to strengthen its navy, aiming to become the leading naval force of the Arab world and expand its influence in the Red Sea and the eastern Mediterranean and, above all, protect its newly discovered undersea gas fields. Most remarkably, it has sought to beef up its submarine fleet.

With the Turkish and Greek naval forces already concentrated in the Aegean and the eastern Mediterranean, the prospect of military escalation is hard to rule out.

To start with, Turkish, Egyptian and Greek surveillance drones are likely to fill the skies over the disputed waters in the coming days. In such an electrified climate, the crashing or shooting down of a single drone might dramatically heighten tensions and trigger a military escalation. As noted, Ankara has already issued a Navtex for the disputed areas and dispatched a seismic research ship escorted by naval forces. Deepening domestic woes might further induce Ankara to fan tensions to distract the public from the worsening economic fallout of the coronavirus pandemic, the slump of the Turkish lira, rising prices and unemployment.

As emphasized, the key question here is whether Egypt will back Greece by adopting a joint military posture. Also, how willing will third parties such as Germany and Spain be to mediate should a crisis erupt? The answers will determine the depth and the scope of a potential crisis down the road.

Judging by Turkey’s scale-tipping intervention in the Libyan war since it signed its maritime accord with the GNA, Ankara appears resolved to use military clout to defend the deal. The coming days will show whether Athens and Cairo have a similar resolve to defend their own deal and whether they are ready to translate it into a joint military effort against Ankara. Such a showdown would raise the specter of a serious military escalation in the eastern Mediterranean involving both naval and air forces.