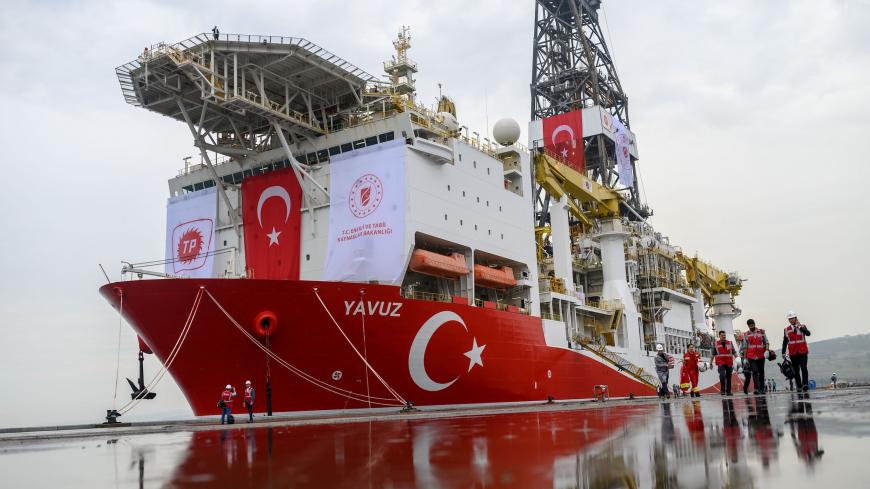 Journalists walk next to the drilling ship Yavuz scheduled to search for oil and gas off Cyprus, at the port of Dilovasi, outside Istanbul, on June 20, 2019. - BULENT KILIC/AFP via Getty Images

Following a brief pause for maintenance, Turkey’s Oruc Reis vessel redeployed Monday and reached an area near the Greek island of Kastellorizo two miles off the Turkish coast, where it began conducting gas discovery activities Wednesday, according to Turkish Energy Minister Fatih Donmez.

The move was condemned earlier this week by leaders in Athens, Brussels and Washington, who called on Ankara to seek diplomatic solutions in settling long-simmering disputes with neighboring Greece regarding overlapping maritime claims in the region.

Speaking to lawmakers Wednesday, Turkish President Recep Tayyip Erdogan said Greece and Cyprus failed to uphold commitments made during negotiations within the EU and NATO following a string of territorial spats over the summer.

“We will continue to give Greece and the Greek Cypriot administration — who fail to keep their promises at the EU and NATO platforms — the answer they deserve on the ground,” Erdogan told members of the ruling Justice and Development Party.

The developments come after tensions appeared to ease last week between the NATO allies when the Greek and Turkish foreign ministers agreed to pursue exploratory talks. The Greek Foreign Ministry denounced the redeployment of the Oruc Reis and its accompanying vessels in a statement Monday, saying Ankara was undermining efforts toward dialogue by “systematically” ignoring international law.

German Foreign Minister Heiko Maas also condemned the decision Tuesday while speaking in Athens after cancelling a scheduled visit to Ankara earlier this week. Maas said energy prospecting near Kastellorizo would pose a “serious blow” to efforts to reduce tensions between the EU and Turkey.

In response, Ankara maintained the Oruc Reis was deployed following provocative acts by Athens, including recent military drills in the Aegean Sea on a Turkish national holiday. Over the weekend, Egyptian President Abdel Fattah al-Sisi also ratified an Aug. 6 maritime agreement between Cairo and Athens demarcating a shared boundary between the two nations, which overlaps Turkish claims in the region via a November 2019 Ankara-Tripoli agreement.

On Monday, Turkish Presidential Communications Director Fahrettin Altun tweeted that Ankara remains committed to diplomacy, “But there can be no negotiations if you say 'what’s mine is mine and what’s yours [is] negotiable.’”

Greek Foreign Minister Nikos Dendias said Tuesday that Athens would not take part in bilateral talks as long as the Oruc Reis remains in disputed waters. The ship is currently scheduled to conduct seismic research until Oct. 22.

Amid the heightened tensions, Zenonas Tziarras, a researcher at the PRIO Cyprus Centre and co-founder of Geopolitical Cyprus, said Ankara might be reacting to warnings from EU leaders who, following an Oct. 1-2 summit, concluded the bloc could impose sanctions if Turkey continued “provocations” in the eastern Mediterranean.

Tziarras added that Erdogan’s foreign affairs agenda may also be propelled by “challenges his government faces domestically,” including a weakened economy as a result of the COVID-19 pandemic.

“Turkey's ‘gas surveys’ are not primarily about gas but about sovereignty and politics,” Tziarras told Al-Monitor.

In addition to the Oruc Reis, Turkey’s Barbaros Hayrettin Pasa seismic vessel is continuing energy prospecting activities near Cyprus and will be joined by the Yavuz drillship following maintenance work, Erdogan said Wednesday.

While Turkey’s energy prospecting activities are not on the agenda for an upcoming Oct. 15-16 EU summit, Greek and Cypriot leaders said they will once again raise the maritime dispute with bloc leaders. Ankara’s latest escalation was condemned by EU foreign policy chief Josep Borrell, but an unnamed German official told Reuters Wednesday the EU was unlikely to impose sanctions on Ankara after this week’s summit.

Michael Tanchum, a professor of international relations at the University of Navarra and senior fellow at the Austrian Institute for European and Security Policy, said from Ankara’s perspective, it’s an “opportune time” to stake claims in the Aegean and eastern Mediterranean Sea following Ankara’s growing leverage in the regional conflict areas and increasing domestic support.

“The battlefield successes of Turkish-backed Azerbaijani forces has made Turkey's use of coercive force in international relations even more popular,” Tanchum told Al-Monitor.

Noting the EU postponed a decision on Turkey’s actions in the eastern Mediterranean until December, Tanchum said, “Ankara probably judged that there would be little cost imposed by Brussels, Berlin or Washington” for taking a more assertive posture in the region.

Also on Wednesday, Erdogan said he would announce a new figure on Oct. 17 for recently discovered gas reserves in Turkey’s Black Sea region. The find, originally announced in August, was estimated to hold 320 billion cubic meters of gas and has since undergone further analysis.